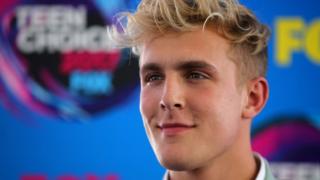 YouTuber Jake Paul has been charged with criminal trespass and unlawful assembly during unrest at a mall in Arizona.

The 23 year old has denied any involvement in looting or vandalism at the mall in Scottsdale on Sunday.

Local police said they had received hundreds of tips about his presence.

At least 20 people have been arrested in the incident, part of widespread unrest across US cities in the wake of the death of George Floyd.

Since the unarmed African-American died in police custody in Minneapolis last month, more than 10,000 people have been arrested in US unrest, according to a tally compiled by the Associated Press.

Violence at the Scottsdale mall was estimated to have cost millions of dollars in damages and theft.

Police say they have since recovered thousands of dollars in stolen property.

In a statement on Thursday, the Scottsdale Police Department said that, as part of its investigations, “it was confirmed that Jake Paul was in attendance and remained inside after an unlawful assembly was declared”.

We've received 100s of tips in response to the events at @ScottsdaleFS. In our continued investigation it was confirmed that Jake Paul was in attendance & remained inside after an unlawful assembly was declared & has been charged with Criminal Trespass & Unlawful Assembly. pic.twitter.com/ySPmZT7ADv

Jake Paul tweeted on Thursday: “Gimme my charges and let’s put the focus back on George Floyd and Black Lives Matter.”

The YouTube star, who also has 3.7 million followers on Twitter, had earlier issued a statement on social media after photos and videos were posted online purporting to show him taking part in the violence.

“Neither I nor anyone in our group was involved in any looting or vandalism,” Jake Paul said. “We filmed everything we saw in an effort to share our experience and bring more attention to the anger felt in every neighbourhood we travelled through.”

Donald Trump successor: Ivanka Trump ‘prepped’ by POTUS to take over as US President

Coronavirus warning from Italy: Effects of COVID-19 could be worse than first thought

German economy panic as car giant Volkswagon gears up to slash up to 5,000 jobs