US makes up almost a quarter of all fatalities with 140,000 reported as daily number of cases continue to break record.

Here are the latest updates. 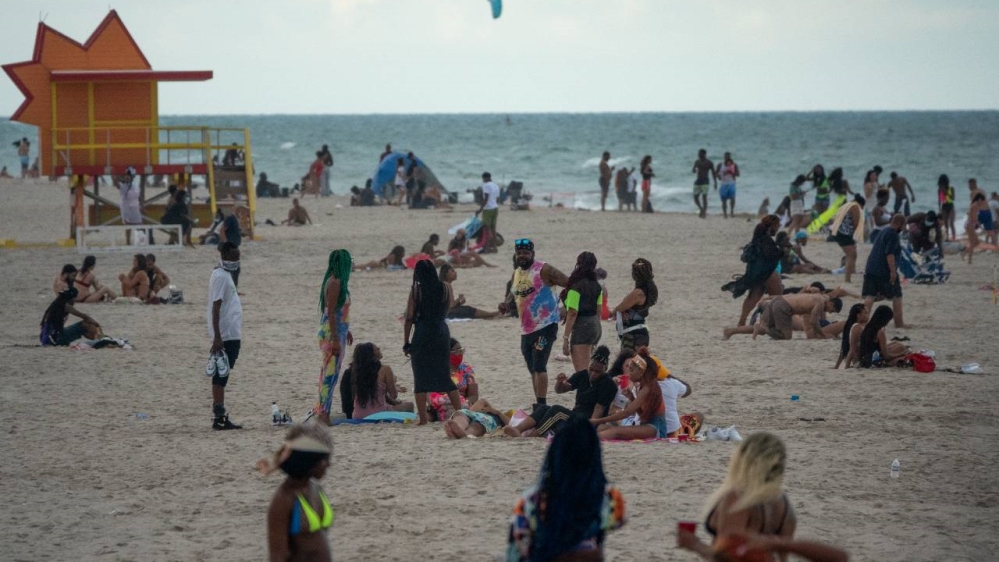 US deaths from the novel coronavirus exceeded 140,000 on Saturday as cases continued to rise in 43 out of 50 states over the past two weeks, according to both Johns Hopkins University and Reuters tallies.

Since late June, the US has seen a resurgence in new cases and now, six weeks later, deaths have also begun rising, according to a weekly Reuters analysis of state and county data.

America is losing about 5,000 people to the virus every week. By contrast, neighboring Canada has reported total deaths of 8,800 since the pandemic started.

In just one week, the United States records about as many deaths as the 5,600 lives Sweden has lost since the pandemic began earlier this year.

China on Sunday said another 13 confirmed cases of coronavirus have been reported in the northwestern city of Urumqi, raising the total in the country’s most recent local outbreak to at least 30, AP news agency reported.

An additional three cases were brought into the country from overseas, increasing China’s total number of confirmed cases to 83,660 with 4,634 reported deaths.

Despite the Urumqi outbreak, China has just 251 people remaining in treatment for COVID-19, according to the National Health Commission.

Another 151 people were being monitored in isolation for showing signs of having the virus or for testing positive without showing symptoms. At least 23 of those asymptomatic cases were in Urumqi, although China does not include those in the numbers of confirmed cases. 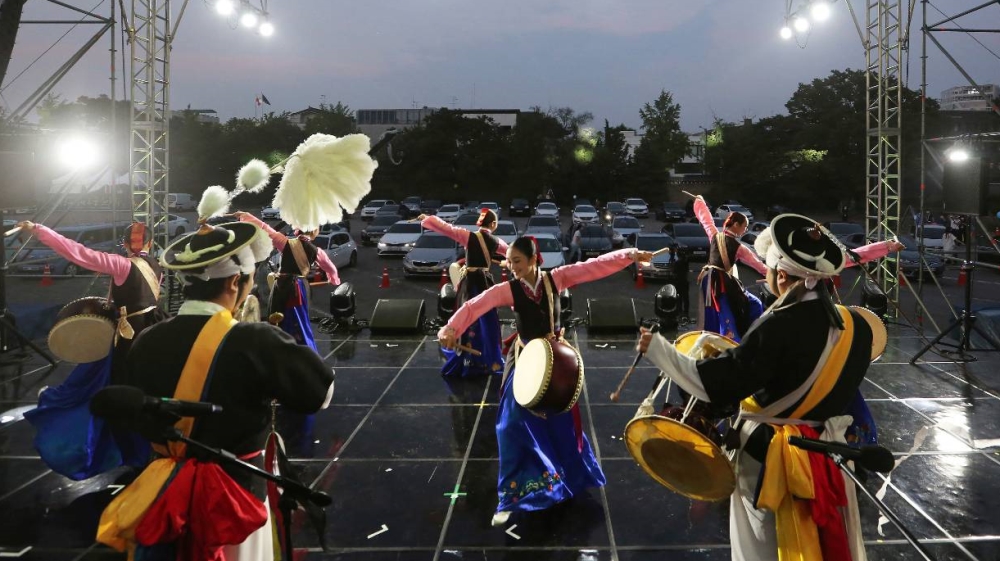 South Korea’s new daily virus cases hovered below 40 for the second straight day on Sunday, but the number of local transmissions outpaced that of imported cases for the first time in over a week, according to Yonhap news agency.

The country identified 34 new cases, raising the total caseload to 13,745. Of the newly reported cases, 21 were locally transmitted, according to the Korea Centers for Disease Control and Prevention (KCDC).

The latest tally marks a steady decline from 61 new infections reported Thursday and 60 on Friday, largely due to high numbers of imported cases.

As of Sunday, South Korea has seen double-digit figures of imported cases for 24 consecutive days.

The country’s death toll came to 295, with one more virus-caused death reported, according to the KCDC.

Police in Barcelona are limiting access to some of the city’s beaches because sunbathers are ignoring regulations amid a resurgence of the coronavirus.

Catalan health authorities reported over 1,200 new cases on Saturday from the preceding 24 hours. The new outbreaks have forced regional officials to announce the prohibition of gatherings of over 10 people that went into effect Saturday.

Barcelona and other areas of the surrounding northeast Catalonia region have experienced the largest outbreaks in Spain since the European country ended a strict three-month nationwide lockdown.

The mandatory use of face masks is rapidly spreading across Spain as officials grapple with more than 180 active outbreaks, most in Catalonia and neighbouring Aragon regions.

The coronavirus has resulted in at least 28,000 confirmed deaths in Spain.

Greek authorities announced 19 new cases of coronavirus and no new deaths over the past 24 hours, the Associated Press news agency reported.

Total confirmed cases in Greece since the outbreak of the epidemic are 3,983, with 194 deaths.

Despite the relatively low number of cases, authorities are concerned about increasing evidence that social distancing guidelines are not being followed. On Saturday, they extended the requirement to wear masks to supermarket customers – and they are considering expanding the mask requirement further. 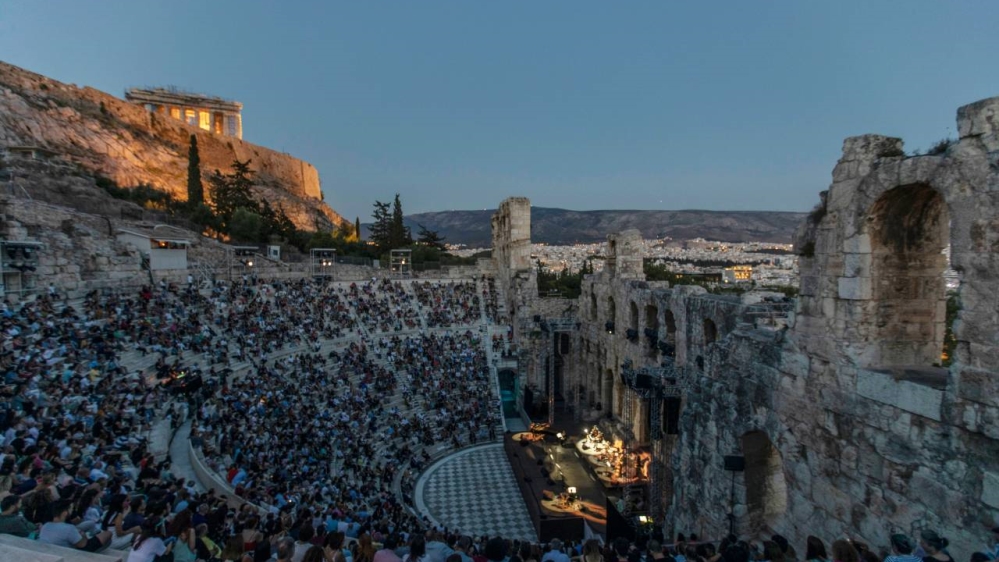 South Africa now ranks fifth in the world for confirmed coronavirus cases as the African continent faces the pandemic’s first wave head-on, according to the Johns Hopkins University tally.

South Africa on Saturday reported 13,285 new confirmed cases for a total of 350,879. That puts the country ahead of Peru, and accounts for roughly half the cases in Africa.

Gauteng province, home to Johannesburg and the capital, Pretoria, is now Africa’s epicentre for the virus. It has one-quarter of the country’s population and many of the poor are crowded in township areas with inadequate access to clean water and sanitation.

South Africa has seen 4,948 reported virus deaths, but the South African Medical Research Council in its most recent report shows the country had 10,944 “excess deaths” between May 6 and July 7.

Mexico’s Health Ministry has reported 7,615 new confirmed coronavirus infections and 578 additional fatalities, bringing the total in the country to 338,913 cases and 38,888 deaths.

The government has said the real number of infected people is likely significantly higher than the confirmed cases, according to Reuters news agency.

Leaders of the European Union have extended until Sunday their summit after failing to agree on a massive stimulus fund to revive their coronavirus-hammered economies after two days of fraught negotiations, Reuters news agency reported.

As the 27 leaders scurried back to their hotels after a late Saturday night, German Chancellor Angela Merkel and French President Emmanuel Macron stayed behind in the EU’s headquarters in Brussels to haggle with the Dutch-led camp of thrifty countries demanding cuts to the 1.8 trillion euro ($2.06 trillion) package.

“The negotiations were heated,” said Prime Minister Giuseppe Conte of Italy, one of the EU countries most affected by the coronavirus crisis that are seeking generous aid from the bloc. “Europe is under the blackmail of the ‘frugals’.”

“We have to do all what is possible to reach a deal tomorrow,” Conte said. “Further delays are not useful to anybody.”

You can find all the key developments from yesterday, July 18, here.