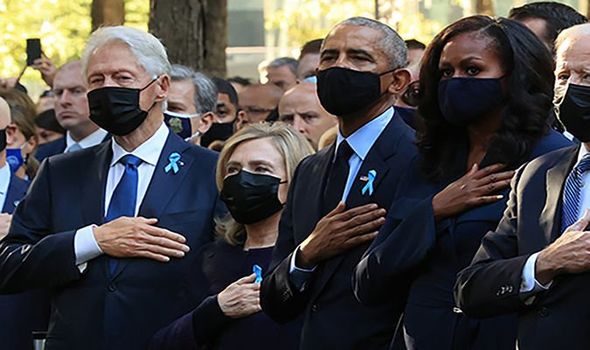 Almost 3,000 people from more than 90 nations were killed as al-Qaeda terrorists flew planes into the Twin Towers of the World Trade Centre and the Pentagon.

Another plane, United Airlines Flight 93, crashed into a field in Pennsylvania after passengers stormed the cockpit in a doomed bid to regain control.

At scores of memorials and gatherings around the globe, a moment of silence began at precisely 8.46am in New York (1.46pm in the UK) – the exact time the first plane hit the North Tower of the World Trade Centre.

In Britain, hundreds gathered inside and outside the walls of Windsor Castle for a special Changing of the Guard ceremony. The Band of the Welsh Guards played the Star Spangled Banner just as, two decades ago, the US national anthem was played at Buckingham Palace the day after the attacks in which 67 Britons died.

In a special message to President Biden, the Queen recalled her own visit to Ground Zero 11 years ago.

She said: “As we mark the 20th anniversary of the terrible attacks on 11th September 2001, my thoughts and prayers – and those of my family and the entire nation – remain with the victims, survivors and families affected, as well as the first responders and rescue workers called to duty.

“My visit to the site of the World Trade Centre in 2010 is held fast in my memory.

“It reminds me that as we honour those from many nations, faiths and backgrounds who lost their lives, we also pay tribute to the resilience and determination of the communities who joined together to rebuild.”

Prime Minister Boris Johnson said it was “precisely because of the openness and tolerance of the United States” that people of almost every nationality and religion were among those who were killed.

A floral tribute from Mr Johnson was also placed at a memorial in Grosvenor Square in London yesterday.

Labour leader Sir Keir Starmer said the anniversary was not only about remembering and honouring the victims but also to show “support to our American friends as they mark this difficult time in their history”.

Archbishop of Canterbury Justin Welby said that 20 years on, it is still hard to articulate the sense of “shock and horror” felt around the world after the attacks, including “the devastating loss experienced by so many people, and the fear and uncertainty that terrible day brought”.

Prince Harry and Meghan also paid tribute by blacking out their Archewell website homepage and instead devoting it to an “In Mem- oriam” list of every single name of the almost 2,977 victims who were killed at theWorldTrade Centre, the Pentagon and at Shanksville, where the heroic passengers of Flight 93 sacrificed their lives.

At 9/11 Memorial Plaza in New York, the names of each victim were read out as President Biden – along with former Commanders-in-Chief Barack Obama and Bill Clinton – stood in silence.

Mr Biden, who also later attended memorials at the Pentagon and in Pennsylvania, called on Americans in a speech on Friday to embrace unity as they reflect on the attacks that reshaped the nation.

He said: “In the days that followed September 11, 2001, we saw heroism everywhere – in places expected and unexpected. We also saw something all too rare: a true sense of national unity.” The President added: “We also witnessed the darker forces of human nature: fear and anger, resentment and violence against Muslim Americans, true and faithful followers of a peaceful religion.

“We saw national unity bend. We learned that unity is the one thing that must never break. Unity is what makes us who we are – America at its best.”

Few who were watching on TV at the time will forget the look of frozen horror that spread across the face of Mr Bush after an aide whispered news of the first deadly attack in his ear during a visit to a school in Sarasota, Florida, at which youngsters were reading to him in a classroom.

Yesterday he recalled “the day the world went quiet with missing voices”, adding: “Man’Americans struggled to understand’ why an enemy would hate us with such zeal. The security measures [now] incorporated into our lives are both sources of comfort and reminders of our vulnerability .

“And we have seen growing evidence that the dangers to our country can come not only across borders but from violence that gathers within.”

The former Republican president noted there is “little cultural overlap between “violent extremists abroad and violent extremists at home except for their disregard of human life. In their determination to defile national symbols, they are children of the same foul spirit and it is our continuing duty to confront them,” He said .

In the UK, a British survivor told a memorial service in London that she copes by living “in the hope that tomorrow will be a better day – and it mostly is”.

Janice Brooks, now aged 61 and living in Norfolk, spoke in front of a huge piece of twisted steel, weighing four tons, part of theWorldTrade Centre ‘s South Tower, from which she managed to escape – unlike 61 colleagues and friends from financial firm

Euro Brokers who died on the 84th floor.

The colossal piece of debris has now been forged into a memorial work of art at London’s Olympic Park.

Janice asked a large crowd to “not only think about my friends but also everyone who died on September 11”.

She added: “Can I please ask that you spare a thought for all the survivors… because we are still struggling.”