Outbreak at pork plant leads to more than 1,600 cases and 20 deaths as Trump orders meatpackers to restart production. 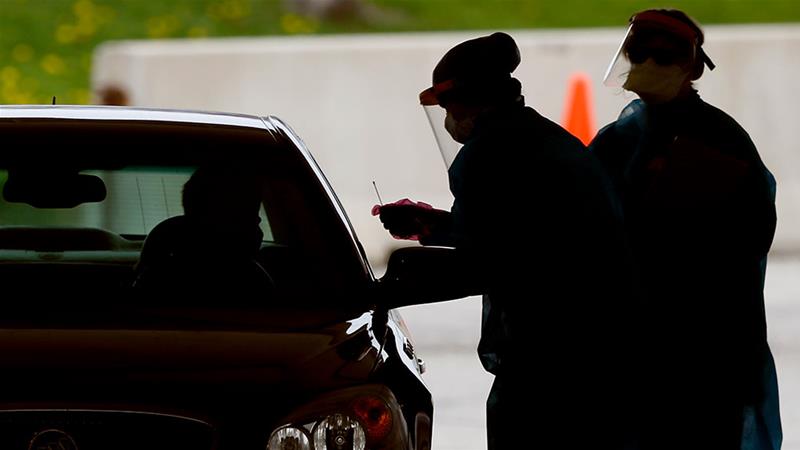 ReQuia Campbell is a hairstylist and mother of five with family members who got sick with COVID-19 while working at a massive pork slaughterhouse in Waterloo, Iowa.

After her father came home sick from work at the Tyson Fresh Meats plant in early April, Campbell became alarmed.

Management at the plant – in the Midwest region of the United States – was not acting on workers’ concerns about spreading the coronavirus in close-quarter conditions at the plant, labour advocates said.

“I was devastated because he has 14 grandkids that he’s around. We were panicking like, ‘Are our kids going to get sick? What is going on?'” Campbell, 31, said.

Campbell and her friends launched a social media campaign and organised a protest urging the shutdown of the plant. After weeks of rising community pressure, the Tyson plant suspended operations on April 22. More than 1,000 of its nearly 3,000 workers tested positive for COVID-19, the disease caused by the coronavirus, and the infection has spread to the wider community and caused 20 deaths, according to local authorities.

Now, in a major test of President Donald Trump’s push to reopen the US economy, the Tyson plant in Waterloo is reopening even as COVID-19 case numbers continue to rise locally and nationwide. Workers and their families are fearful.

“A lot of people are on edge,” Campbell told Al Jazeera.

Trump used a wartime law on April 28 to direct meatpacking plants nationwide to continue operating during the pandemic to avert food shortages. More than 170 meat and poultry processing plants nationwide have reported COVID-19 outbreaks, according to the Midwest Center for Investigative Reporting.

Before the coronavirus forced its shutdown, the Tyson plant in Waterloo slaughtered 19,500 hogs a day, producing 3.9 percent of the US pork supply. Farmers were forced to destroy their animals when the plant stopped running. 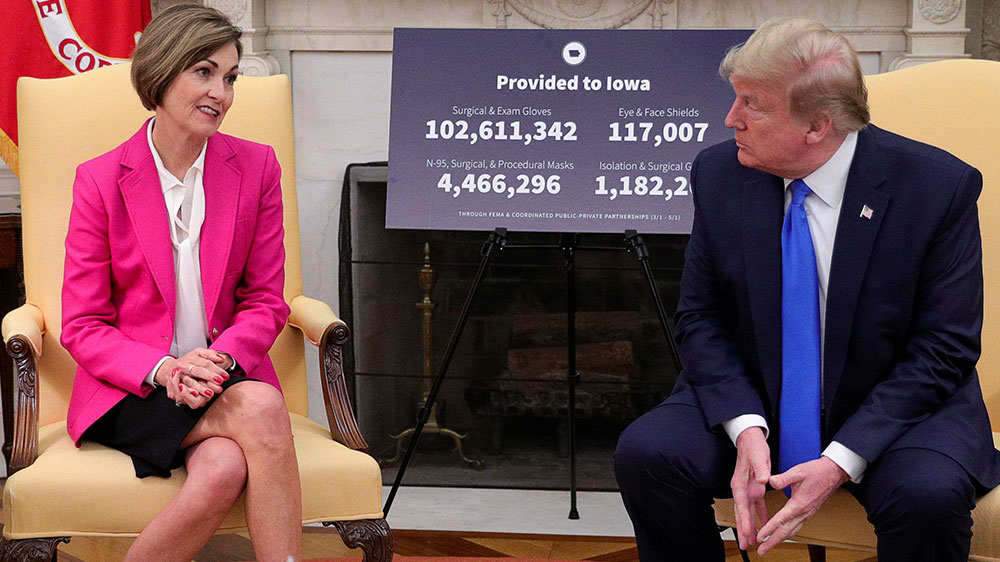 On Wednesday, Iowa’s Republican Governor Kim Reynolds joined the president at the White House to tout Iowa’s progress in reopening meatpacking plants. Employees must get tested for the coronavirus before returning to work and are required to wear face masks and stay six feet apart, she noted.

“We are providing them the confidence of a safe environment, but at the same time we’re making sure that food supply chain is moving and that the country is being fed,” Reynolds told reporters at the White House.

But local officials see a bigger problem. With the virus spreading in communities, the state is not providing adequate testing and is not fully counting data on new cases, they say. Further, without monitoring and enforcement, reopening of the meatpacking plants is seen as an experiment in social distancing.

“It is irresponsible to downplay what is happening,” said Ras Smith, who represents Waterloo in the Iowa state legislature.

“We are seeing outbreaks all over the state,” Smith told Al Jazeera. 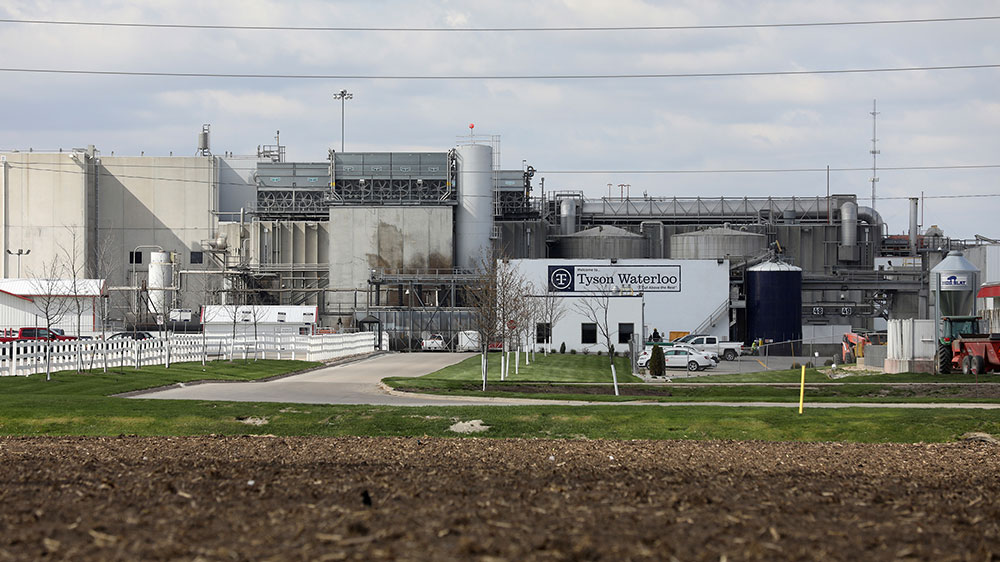 Major meatpacking plants in the Iowa cities of Columbus Junction, Tama, Estherville, Perry and West Liberty were forced to close last month because of the coronavirus. A pet food plant in Independence also has had cases, according to workers.

“Governor Reynolds is out of touch with the people of Iowa,” Smith said.

Straddling a tributary of the Mississippi River flowing through the agricultural heart of the Midwest, Waterloo is a diverse city of 68,000 people. Nearly everyone in town knows someone who works at the local meatpacking plant. Most of the workers are people of colour or immigrants. Many are undocumented.

“I was enraged. I was incensed,” said Tony Thompson, the sheriff of Black Hawk County after he visited the Tyson plant in early April.

Seeing conditions at the plant, “I knew they had just blown a hole out of the front-line of defence in our community,” Thompson told Al Jazeera.

Thompson was one of 20 local officials who signed a letter to Tyson in mid-April asking the plant to shut down.

Now, most of the 1,600 confirmed cases in the Waterloo area can be traced to the plant, said the sheriff. And while Tyson has done an “impressive” job fitting the plant with dividers to separate employees on the processing line, “that in no way alleviates” the damage already done, he said.

Tyson invited workers to tour the newly outfitted plant on Wednesday and distributed a video illustrating the new social-distancing measures and health-monitoring procedures.

“We have been speaking with a lot of different workers,” said Nilvia Reyes Rodriguez, a community organiser with the League of United Latin American Citizens Local 370 in Waterloo.

“With the reopening happening, there are concerns as to whether truly all of the measures can be implemented,” Rodriguez told Al Jazeera.

“The way the production is currently run, they just feel that it is going to be hard to implement safety measures,” she said.

Working conditions in the US meatpacking industry are difficult and dangerous. The killing floor where animals are executed before being processed is a brutal scene. Processing lines involve rapid, repetitive cutting motions that can lead to injuries. All of it takes place in a cold, refrigerated atmosphere.

The work pays low wages and is more often done by immigrants and minorities. As a result, workers’ rights to safe working conditions are not well protected, and their latitude to speak up without being threatened is compromised, labour advocates said.

In Waterloo – where many of the meatpacking workers are Congolese immigrants and Burmese refugees – some feel their lives are being put at risk to keep up the national pork supply.

“A lot of people think that is still a tad bit too soon in light of what we think we know. The cases are still going up. We haven’t even flatlined yet,” said Abraham Funchess, director of the Waterloo Commission on Human Rights, which has opened an inquiry into what’s happening at the Tyson plant.

“They are very reluctant about wanting to go back in because they realise they are risking their lives,” Funchess said.

Trump is betting his re-election prospects in November on how the contest between the virus and reopening the economy in places like Iowa works out. In states like Iowa, control of the US Senate is in play.

Republican Joni Ernst, who has been quiet about the meatpacking issues in Iowa, is among several US senators who face difficult re-elections.

Despite the upbeat messages from Trump and Governor Reynolds, local officials said the state of Iowa is not putting in place the testing and monitoring measures needed to stop the pandemic.

Jonathan Grieder is a member of the Waterloo City Council and a high school teacher. He knows former students whose parents have died from COVID-19.

“It is very clear that essential workers – who are often paid very little, who are often from communities at risk, economically, politically and socially – are so essential but we are so willing to exploit them because it is bothersome for the rest of us with privilege to deal with this issue,” Grieder told Al Jazeera.

“This has been an abject failure,” he said.