The latest horror of the pandemic is that large numbers of people around the world are dying for lack of access to medical oxygen, especially in India. Each day, tens of thousands of people are admitted to hospitals with Covid-19, driving the demand for the oxygen far beyond the supply.

Oxygen makes up 21 percent of the atmosphere. A handful of companies capture and purify it in bulk, but they sell most of it to industry. Many poorer parts of the world lack the infrastructure needed to deliver or make use of the medical grade supplies those companies sell, which are designed to be delivered via pipes to hospital rooms.

Some hospitals and clinics have machines that produce purified oxygen at a much smaller scale, but they are in short supply. So many hospitals and patients in poor countries and in remote areas rely on the most expensive option: oxygen tanks that have became scarce in the countries hit hardest by the virus.

The shortages affect patients with every kind of respiratory ailment requiring oxygen, not just those with Covid.

The World Health Organization said in February that $1.6 billion would be needed to remedy the oxygen shortage for a year; now that estimate is up to $6.5 billion. Efforts to raise that money have faltered, though it is a small fraction of what has been spent on vaccines and financial support for businesses and workers.

Here are answers to some of the questions being asked about the oxygen crisis. 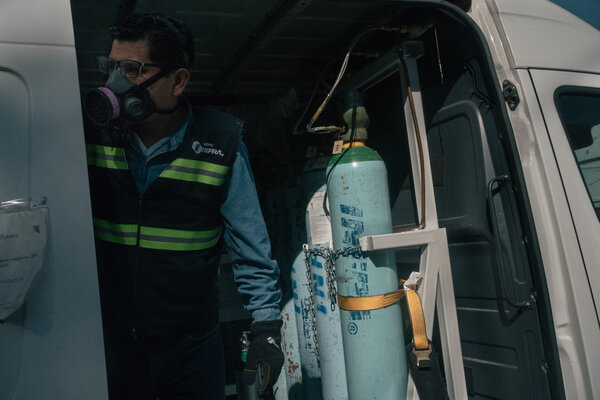 How did it get so bad, so quickly?

Given the enormous, and obvious, need for oxygen during a pandemic affecting the respiratory system, the crisis should not have come as a surprise. But in a year when policymakers lurched from one pandemic challenge to another — P.P.E. shortages, lockdowns, the threat of economic collapse, remote schooling, therapeutics, vaccines — oxygen supply never rose to the top of the list.

“Oxygen hasn’t been sufficiently prioritized,” said Robert Matiru, program director at Unitaid, one of the global public health groups working to address the shortage with the World Health Organization.

Even before the pandemic, some poorer regions were unable to ensure adequate supplies. But it was not until early this year, when lethal oxygen shortages hit northern Brazil, Mexico and elsewhere, that it became clear that what had been seen as a potential problem was becoming a dire emergency. The World Health Organization created an emergency task force on the oxygen shortage and called for money to address it.

Then the pandemic surged in India, where it had been relatively contained, pushing oxygen supplies to the center of the world’s attention. India’s official count of new coronavirus infections leapt from an average of about 11,000 a day in mid-February to a daily average of more than 370,000 in the past week — and experts say the true figure is far higher.

In the last two months, the unmet, global need for medical oxygen has more than tripled, from less than 9 million cubic meters a day to more than 28 million, according to a coalition of aid groups that are tracking the crisis.

About half of that unmet need is in India. And health advocates warn that the calamity there could be repeated in other countries.

How is oxygen made and supplied?

In wealthy countries, hospitals generally rely on tanker trucks to make bulk deliveries of liquid oxygen, far denser than regular air, that is stored in large containers. A system of pipes draws out the gas, allows it to expand to ordinary density and delivers it to each bedside.

This is by far the most cost-effective way of supplying oxygen, and companies that supply bulk oxygen have enough production capacity to meet the global medical demand for it. In just the last few weeks, some of them have begun ramping up their production of medical gas by diverting some from industry, whose gas has somewhat different requirements.

India’s government has ordered the producers there to temporarily direct all of their oxygen output to medical needs.

But many hospitals around the world are not equipped to make use of liquid oxygen, lacking the pipes to distribute it to patients, and there is no delivery system in place for many remote locations.

Oxygen can also be obtained in less dense gaseous form, in cylinders that need to be refilled more often. This is often the most expensive option — it can cost 10 times as much as bulk liquid oxygen — but it is the only one available to many parts of the developing world.

Understand the Covid Crisis in India