Home » World News » Why football is cancelled, but fighting isn’t 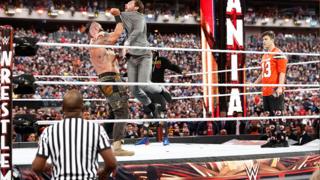 Football, basketball, baseball – all cancelled because of coronavirus. But when it comes to wrestling, must the show go on?

Wrestlemania is the Super Bowl of wrestling, attracting thousands of fans a year and watched on television by many more.

This year, the event was broadcast over the weekend of 4-5 April from the World Wrestling Entertainment’s (WWE) training facility in Florida. Fifty-three performers appeared across 18 matches, including one match with five wrestlers and one referee in the ring at once.

And another segment saw around 10 people – including recently-signed former NFL star Rob Gronkowski – in a brawl. Not to mention the camera operators and crew.

This despite Florida governor Ron DeSantis issuing a state-wide stay-at-home order against a backdrop of more than 14,000 confirmed coronavirus cases in Florida and 283 deaths.

As all other mainstream sports in the US have been either cancelled or postponed, WWE faced calls to cancel the event. Critics pointed to Roman Reigns, one of its most prominent wrestlers, who said he “made a choice” to pull out of the main event.

Reigns has had leukaemia – a type of cancer – and returned to wrestling when it went into remission in 2019.

WWE officials say they did make changes to try and limit the number of people at the event. The organisation said “only essential personnel were on the closed set”, and it was broadcast without an audience, instead of the usual throng of fans.

In its defence, many of the performers took to social media ahead of the event to argue that the show must go on not despite Covid-19, but because of it.

Wrestlemania isn’t the only fighting sport that plans to go ahead.

Mixed martial arts showcase UFC 249 is still slated to go ahead on 14 April.

In late March, UFC president Dana White came under fire for comments he made about coronavirus to Yahoo Sports, when he said UFC 249 would be continuing as planned in April.

“Whether you’re a coronavirus expert or not, it’s like hiding from cancer,” White elaborated.

“I’ve had a great run. If the coronavirus is what’s going to get me, I’m ready. Bring it, corona.”

His comments have been echoed by WWE personnel – “people need to be entertained”.

Wrestlemania opened with Stephanie McMahon, chief brand officer of WWE and daughter of owner Vince McMahon, saying that she hoped the show would provide a “diversion during these hard times”.

“It is our commitment to… deliver a sense of hope, determination and perseverance,” she said.

“And most of all, to entertain you and your family.”

As far as everyone involved in the production is concerned, their purpose is to distract from the coronavirus pandemic. But it is hard to marry up that sentiment with the action in the ring.

Wrestlemania could have minimised contact between performers. Matches could have been limited to a maximum of two people in the ring, with static cameras to eliminate the need for manual camera operators.

Instead, Wrestlemania went far in the other direction with various multi-person matches, and even a bout between Edge and Randy Orton which saw the wrestlers fighting throughout the backstage area and coming into close physical contact with many people in the production crew.

As fans were quick to point out on social media, it would seem WWE is not operating a social distancing policy even for its support staff.

It is clear that Wrestlemania was not broadcast live. It is not clear when the matches were recorded, though we can assume from Roman Reigns’ last minute decision to drop out that they were still being filmed up until a few days before the event.

The company’s decision to go ahead with the show is yet another in a long history of controversial calls for WWE programming to go ahead no matter what.

In 2012, Jerry Lawler suffered a heart attack at ringside whilst commentating on a broadcast of Monday Night Raw. He was transported to hospital and his co-commentator Michael Cole continued calling the action in the ring, which was not halted. Lawler ultimately recovered.

Five years earlier, Monday Night Raw was broadcast mere hours after it was reported that Chris Benoit, one of the company’s leading wrestlers, was found dead at his home with his wife and seven-year-old son. Over the course of the programme, news outlets began reporting that the deaths were a murder-suicide perpetrated by Benoit. The show continued regardless.

But nothing shows WWE’s belief that the show must go on no matter what clearer than a pay-per-view in May 1999. Owen Hart, 33, was being lowered into the ring for a stunt entrance. Something went wrong, and he plunged 50 feet into the ring. He was given CPR in front of the 16,000 fans in attendance, and was ultimately pronounced dead at a hospital.

WWE decided to continue with its Over the Edge pay-per-view event despite the tragic death of one of its wrestlers.

Compare this to a similar event in a different sport, in a different country, when Fabrice Muamba collapsed during a football match between Bolton Wanderers and Tottenham Hotspur in the UK. The match was abandoned – and Bolton’s next fixture was postponed. Muamba ultimately recovered.

If the deaths of its own wrestlers were not enough to stop WWE from broadcasting a show, it is perhaps not surprising that the company did not pull its biggest event of the year.

Coronavirus: Number of cases in Germany rises by nearly 3,000 to 13,957 overnight