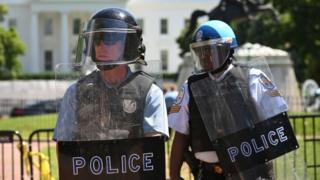 A US National Guard major is disputing the official accounts of the clearing of a 1 June protest near the White House.

The protest in Lafayette Square Park was disrupted by law enforcement who used chemical irritants to push protesters out of the area.

In testimony to Congress, the major says he was “deeply disturbed” by the police reaction to the protest.

It comes amid continuing protests against racism and police brutality.

Adam DeMarco, an Iraq War veteran who is now a major in the Washington DC National Guard, was at the scene of the protest that came after days of rallies outside the White House that injured several officers and left a nearby historic church and park vandalised.

Mr DeMarco is expected to testify on Tuesday to the House Natural Resources Committee, which posted his opening statement to their website on Monday.

What did Mr DeMarco witness?

In his statement to Congress, Mr DeMarco will tell lawmakers that, as he stood behind the US Park Police, he observed that “demonstrators were behaving peacefully” and that tear gas was deployed by law enforcement in an “excessive use of force”.

“It was my observation that the use of force against demonstrators in the clearing operation was an unnecessary escalation of the use of force,” he will tell the committee.

Park Police have denied using tear gas, saying that they instead fired “pepper balls” – projectiles with capsaicin, the chemical that gives peppers heat – at protesters. The US Secret Service has not said whether they used tear gas.

“From my observation, those demonstrators – our fellow American citizens – were engaged in the peaceful expression of their First Amendment rights,” Mr DeMarco’s testimony reads.

“Yet they were subjected to an unprovoked escalation and excessive use of force.”

The police moved in to clear the protesters around 18:30 local time (22:30 GMT) – around 30 minutes before a city-wide curfew went in to effect – and just as Mr Trump began a televised speech from the White House Rose Garden.

After his speech ended, and as the protesters were further pushed back, Mr Trump walked to the nearby St John’s Episcopal Church and briefly posed for a photo as he held up a Bible.

The White House contends that the decision to expand the security perimeter was not related to Mr Trump’s decision to visit the church where moments earlier protesters had gathered.

Mr DeMarco, who says he was standing about 20 yards (18 meters) from protesters, says it was difficult for them to have heard dispersal warnings from police speakers as they were “barely audible” to him.

According to US law, police must give clear and repeated warnings to protesters before dispersing them through force.

“The announcements were barely audible and I saw no indication that the demonstrators were cognisant of the warnings to disperse,” Mr DeMarco will say.

A spokeswomen for the Department of Justice has said that all law enforcement agencies had been told in advance of the plans to disperse the crowd, but Mr DeMarco said the military and police forces present had all been assuming that the order would not come before the curfew deadline of 19:00 local time (23:00 GMT).

“So I was not expecting any clearing operation to commence before then,” he will tell lawmakers.

He also says that he witnessed Mr Trump walking with his White House entourage to the church, and that his presence at the scene – where he says tear gas had been deployed shortly before – was unexpected.

“The president’s arrival was a complete surprise,” Mr DeMarco will say, “as we had not been briefed that he would enter our sector.”

US Park Police and the Department of Justice have not responded to questions about Mr DeMarco’s testimony.

Committee Chairman Raul Grijalva – an Arizona Democrat who invited Mr DeMarco to testify, said his statement shows “the discomfort the military has with policing against the American citizen. This was a political stunt at the expense of the protesters and at the expense of the reputations of the National Guard and the police”.

Mr DeMarco served three overseas deployments, including one in Iraq with the US Army.

The 34-year-old now works as defence contractor for Booz Allen Hamilton, according to the Washington Post.

In 2018, he ran for Congress as a Democrat on a platform that was heavily critical of Mr Trump.