Donald Trump will be able to return to public events as of Saturday, his doctor announced late Thursday, saying the United States president’s condition after being diagnosed with COVID-19 has improved.

In a statement from the White House, Dr Sean Conley said Trump has “responded extremely well to treatment” and that “since returning home, his physical exam has remained stable and devoid of any indications to suggest progression of illness”.

Conley said that Saturday marks 10 days since Trump was diagnosed with COVID-19 on October 1, and he “fully anticipate[s] the president’s safe return to public engagements at that time”.

Guidelines from the US Centers for Disease Control and Prevention say a person who tests positive for COVID-19 can be around others again 10 days after his or her symptoms first appeared.

That is provided the infected person’s symptoms have improved and they have gone 24 hours “with no fever without the use of fever-reducing medications”, the agency says on its website.

Trump’s COVID-19 forced him to cancel several events ahead of the US presidential election on November 3, but since he returned to the White House earlier this week, Trump has insisted that he is doing better and wants to get back on the campaign trail.

“I’d love to do a rally tonight. I wanted to do one last night,” Trump told Fox Business Network on Thursday, adding that “If I’m at a rally, I stand by myself very far away from everybody”. 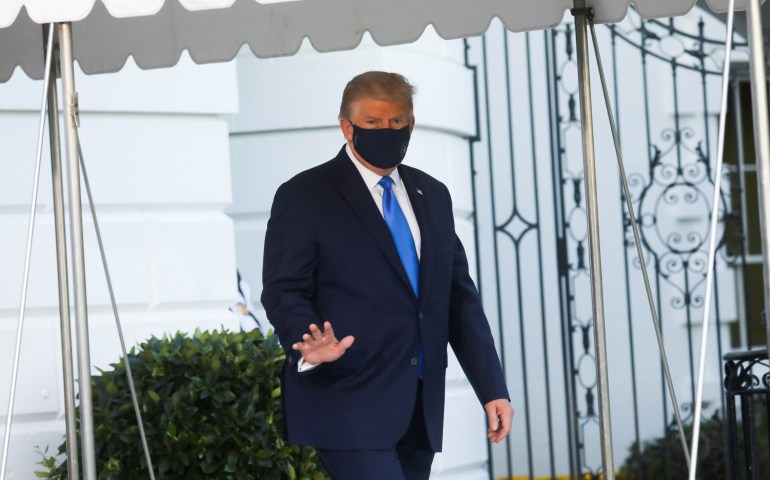 Trump was moved to Walter Reed National Military Medical Center last Friday after testing positive for COVID-19 [Leah Millis/Reuters]But observers have questioned whether the president could still be contagious, and raised concerns about his proximity to staff and others. More than two dozen of Trump’s close aides, political allies and White House staff have tested positive for COVID-19 in the outbreak.

“At this point, there’s no diagnostic test that tells you whether a person that’s infected remains infectious,” Dr Benjamin Pinsky, who leads Stanford University’s virology labs, told The Associated Press news agency. “There is absolutely a chain of unknowns.”

“So, if the president goes 10 days without symptoms, and they do the tests that we were talking about, then you could make the assumption, based on good science, that he is not infected,” Fauci said Thursday on MSNBC.