A celebration of one of the most delicious and versatile vegetarian ingredients we know.

It’s always a thrill to feast on cushiony wild morels and chanterelles, frilly hen of the woods, or black smudges of huitlacoche. But I grew up on those cultivated button mushrooms in the plastic-wrapped pints, and I like cooking with them, too! Even buttons carry the flavor of deep earth, of balmy decay, while somehow mopping up whatever you cook them in, whether it’s soy sauce or red wine, hot sauce or lime juice.

Mushrooms are magic in the kitchen: an all-star ingredient with a range of textures from feathery and delicate to rugged and muscular, and just as satisfying roasted or grilled as raw, fried, stuffed, pickled and braised. We’re celebrating with Mushroom Week at The Veggie, and we’ve got five (5!) recipes for you today.

Let’s start with Yewande Komolafe’s new recipe for roasted mushroom larb. In her version of the Laotian and Thai dish, you pop some mushrooms in the oven until they’re brown, then toss them in a vegan dressing. Don’t be afraid to tweak the dressing to your taste, adding more chiles to make it hotter, or fewer to temper the heat, just don’t skip the roasted rice. Leftovers are perfect for lunch the next day.

Hot sauce. Butter. Blue cheese. You know where this is going: Ali Slagle’s buffalo grilled mushrooms. I admit that I sort of cheated and didn’t turn on the grill because it’s been so hot in Los Angeles. Instead, I used the broiler setting in the oven, which worked great — if you do that, particularly if the pan is set very close to the heat, keep an eye on it because some of the mushrooms will go much faster than others. And if you’re looking for a vegan blue cheese, you can taste some high-quality versions at Riverdel in Manhattan (and they take orders online, too).

Mushrooms simmered in red wine, nestled in a buttery divot of mashed potatoes. This is the kind of dinner I want to snuggle up with at the end of a tiring day. Melissa Clark’s mushroom Bourguignon is also perfect on polenta, or a pile of noodles, but I need it on mashed potatoes! It could be the star of a dinner party, but I’d absolutely make it for just myself and put any extra in the freezer for a rainy day.

I don’t cook nearly enough with farro, which has a wonderfully chewy texture that I think goes particularly well with mushrooms. This Martha Rose Shulman recipe for farro with mushrooms is so good, and if you don’t have dried mushrooms to make that mushroom stock in the first step, you can use vegetable stock instead.

And if you want to get ahead on not one, but two excellent mushroom recipes, buy about four pounds of mixed mushrooms. Roughly chopped or torn, they’ll fit on 2 sheet pans in the oven, and you’ll have the browned mushrooms ready to go for both the larb recipe and these mushroom chicharrón tacos from Jocelyn Ramirez. Now, make a pico de gallo, warm some corn tortillas and revel in the delights of Mushroom Week. 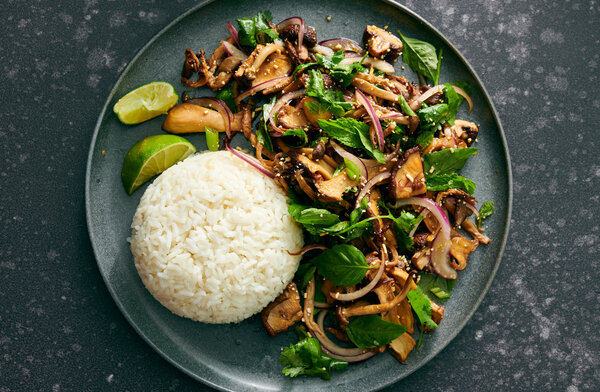 How do you clean your mushrooms? Priya Krishna gives her mushrooms a little wipe with a wet paper towel, as do many of the NYT Food staffers I polled. Eric Kim runs them under water because, as he put it, life is short.

I use the tip of a paring knife to take off any clumps of dirt as I’m trimming, chopping or tearing the mushrooms up, and that’s the extent of it. But if the mushrooms are really dirty, I’ll submerge them in water and shake them around, then drain and repeat. While some of that excess water adds a few minutes to the overall cook time, it also, eventually, evaporates.

Coronavirus: Here’s a look at COVID-19 research around the world