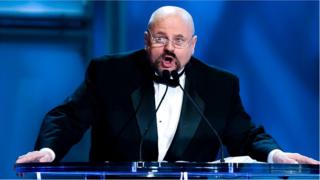 Professional wrestling ring announcer Howard Finkel has died. He was 69.

Finkel’s voice was synonymous with World Wrestling Entertainment (WWE) in the 1980s and 1990s, and he announced wrestlers from Hulk Hogan to Stone Cold Steven Austin.

He made his debut for the World Wide Wrestling Federation – the predecessor to WWE – in 1977.

The announcer then became the first person WWE hired when it was established in 1980.

There has been an outpouring of tributes from the wrestling world, with wrestlers and fans alike sharing their memories of Finkel.

WWE CEO Vince McMahon said “the grandest moments in sports entertainment history were made all the grander thanks to Howard’s iconic voice”.

Triple H, whose first title win in WWE – the Intercontinental Championship in 1996 – was announced by Finkel, said “you weren’t someone until you heard Howard announce you”.

You weren’t someone until you heard Howard announce you. A championship win didn’t feel real until you heard him say “and the new!” His voice, his personality, and his positivity will be sorely missed. Thank you for everything…especially your friendship. https://t.co/CYSPt6vnvU

Former champion Booker T called him “without a doubt the greatest ring announcer of all time” and Trish Stratus, a six-time women’s champion, said Finkel was “the voice of the WWE”.

Meanwhile, Hulk Hogan thanked “the Fink” for supporting him “through the good and bad times”.

“Even when I was on the outs Howard would call on a consistent basis to tell me to always keep my head up,” he said.

“It was ‘never say never’ and ‘you and Vince will work it out’. My good friend RIP. I love you for life.”

Such was his ubiquity in professional wrestling that even rival wrestling company AEW shared a tribute on social media.

We are saddened to learn that Legendary Wrestling Ring Announcer, Howard Finkel has passed away at the age of 69. Our thoughts are with his friends and family. pic.twitter.com/HiwooWVF4f

Though he made fewer appearances with WWE in later years, one memorable moment in 2011 saw Howard Finkel return – to a rapturous response from the crowd.

Tasked with announcing CM Punk to the ring, Finkel was overcome with emotion when the 16,000 people in attendance began loudly chanting his name after the surprise appearance.

The crowd were so vocal, he was teased by commentators that he was taking his time to savour the moment, and when CM Punk eventually made his entrance, he pretended to glance at his watch before the two shared a hug.

Finkel later called it the highlight of his career.

Mum ‘drugged and smothered her five kids after splitting from husband’