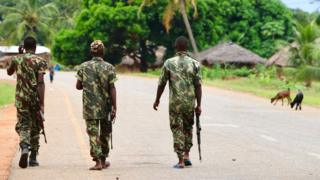 The police say that the villagers in Cabo Delgado province were “massacred”, with some beheaded, after some people refused to be recruited into the militant group.

Hundreds have been killed and thousands displaced during the three-year insurgency in Cabo Delgado.

No group has said it was behind the attack.

A militant group calling itself al-Shabab operates in the area and last month briefly seized control of the town of Mocimboa de Praia.

It is unclear whether it is linked to the significantly larger Somali movement of the same name.

The attack took place in the village of Xitaxi in Muidumbe district on 7 April but only came to light late on Tuesday.

“Recently, the criminals tried to recruit young people to join their ranks, but there was resistance on the part of the youths. This provoked the anger of the criminals, who indiscriminately killed – cruelly and diabolically – 52 young people,” police spokesman Orlando Mudumane told state media.

Cabo Delgado is one of Mozambique’s poorest regions, but is rich in untapped mineral resources.

Last Wednesday, national police commander Bernardino Rafael denied that any parts of the province were under the control of insurgents, reports Reuters news agency.

There is conflicting information about the number of people killed in this incident, which happened two weeks ago. There have been reports that 14 local people were massacred. The Mozambique government – which rarely offers information about this sort of attack – has now announced a much larger figure.

The timing and context of the police statement may be significant.

The so-called Islamic State group – which has sought to take credit for recent insurgent attacks in northern Mozambique – has just put out a video claiming responsibility for the downing of a military helicopter in the region. The helicopter is reported to belong to one of several foreign security companies allegedly hired by the Mozambique government to support its counter-insurgency operations in Cabo Delgado province.

There is speculation that the Mozambique authorities are now highlighting the 7 April incident in order to deflect attention from what is widely considered a propaganda coup for IS, which is actively seeking to build “franchise” operations in conflict zones across Africa.

Other recent videos have tended to strengthen the theory that the insurgency in Cabo Delgado is a home-grown Islamist rebellion, fuelled largely by local grievances.