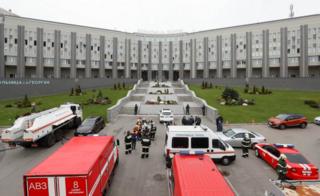 The US says it will not use a batch of Russian ventilators, pending inquiries into two deadly hospital fires.

The ventilators have been linked to blazes that killed five people in a coronavirus intensive care unit in St Petersburg on Tuesday, and one at a hospital in Moscow last week.

Russian regulators have suspended use of the Aventa-M ventilators nationwide, after they were linked to the fires.

The manufacturers say they have been in use since 2012 without safety concerns.

Radio-Electronic Technologies Concern, which controls the company that makes the Aventa-M, urged others not to rush to judgement until investigations had reported back.

What did US officials say?

In the US, the Federal Emergency Management Agency (Fema) made clear the Russian ventilators, procured during a race to stockpile medical equipment to deal with the coronavirus pandemic, had not been used.

The Aventa-M has “not been deployed to hospitals”, Fema spokeswoman Janet Montesi said in a statement. “Out of an abundance of caution, the states are returning the ventilators to Fema.”

The agency told CNBC: “The conclusion(s) of the investigation being conducted by the Russian authorities into the fire in St Petersburg will help inform our decision regarding any future use of the ventilators.”

What happened in the fires?

The blaze at St George’s Hospital in St Petersburg was apparently started by a short-circuit in a ventilator, Russian news agencies reported.

The fire was quickly put out and 150 people were evacuated from the hospital, the country’s emergency ministry said. All the patients who died had been on ventilators.

“The ventilators are working to their limits. Preliminary indications are that it was overloaded and caught fire, and that was the cause,” a source at St Petersburg emergencies department told the Interfax news agency.

Russia’s NTV news website quoted doctors as saying a short-circuit caused a ventilator “literally to explode”, and the ward filled with smoke, which suffocated the patients.

The fire did not spread beyond one small Covid-19 ward on the sixth floor.

A statement by Russia’s healthcare watchdog Roszdravnadzor suggests ventilators are also suspected of causing a fire at Spasokukotsky hospital in Moscow on 9 May.

The Emergencies Ministry’s Moscow branch reported that one person had died, and about 200 were evacuated. Reports said the blaze was in an intensive care ward, and had been started by ventilators. Part of the hospital was repurposed for treating Covid-19 patients in April.

What is known about the Aventa-M?

Production of ventilators has increased rapidly to cope with a shortage in Russia, but research by the Reuters news agency found that outside Moscow many ventilators are old – made in the 1990s.

The Aventa-M model in question, however, is reported to have been built this year in Sverdlovsk.

A police source quoted by Tass news agency said the ventilator which caught fire was new – it had been installed just this month – and was made by Russia’s Ural machine-building plant.

It’s not clear how many machines are affected by the order from Russia’s healthcare regulator, or how many were sent from Russia to the US.

State investigators have opened a case to determine whether there was criminal negligence – either in the ventilator design and manufacture or in the hospital’s fire precautions.

The All-Russia Institute for Medical Technology Research points out that there are many different types of medical ventilator, so a fault in one may not be common to others.

Alexei Kurinny, a member of the Russian parliament’s health committee, said it was unlikely that a ventilator could have short-circuited or overloaded, and that fire safety was built into their design.

What is the coronavirus situation in both countries?

News of Tuesday’s fire came as Russia is starting to ease lockdown restrictions. Construction, farming and factory workers are resuming their duties.

Russia now has the second-highest number of confirmed infections worldwide after the United States.

On Tuesday the top US infectious diseases doctor warned senators that the coronavirus would spread further if the country opens up too soon.

Dr Anthony Fauci said if federal guidelines to reopen were not followed, “little spikes” would become outbreaks. He also said the real US death toll is probably higher than the official figure of 80,000. 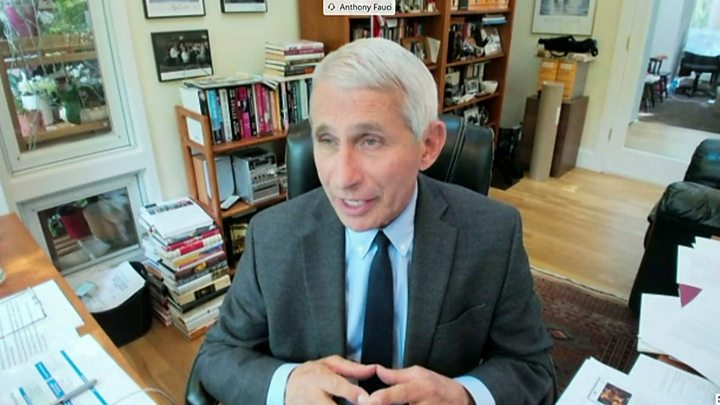 St Petersburg’s hospitals have been overstretched by the outbreak and doctors are working at full capacity.

The city has recorded just over 8,000 cases of Covid-19 so far – far fewer than Moscow, where the infection rate is continuing to climb at over 10,000 new cases daily.

Israel and Bahrain formalise relations at ceremony in Manama