US presidential election candidates Donald Trump and Joe Biden were scheduled to debate on-stage tonight in their second bout since a “toxic” clash in late September. However, President Trump contracted COVID-19 not long after the first event, leaving him briefly in hospital and out of action for more than a week as he recovered from the disease. Now he has returned back to the campaign trail, both Mr Trump and Mr Biden have scheduled town hall events for today, but plans have received widespread criticism from hundreds of thousands of voters and public figures.

Mr Trump and Mr Biden will appear on-screen as scheduled today, but not against one another.

Each will participate in a “town hall” – a moderated event in which each candidate answers questions on their policy plans for the US.

The appearances should give voters a chance to learn the detail of each candidate’s platforms rather than bear witness to a hostile to and fro, which offered little more than spectacle last month. 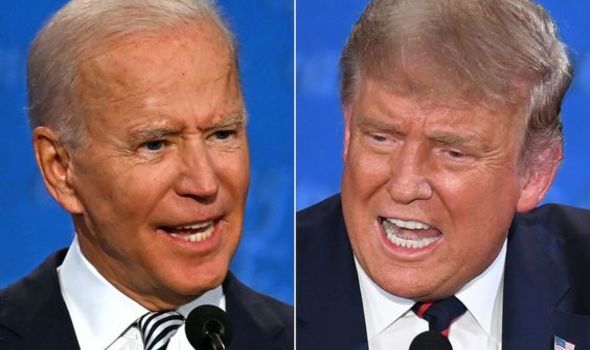 The event will run for two hours in total, covered by the network from the National Constitution Center in Philadelphia.

The former Vice President will speak for 90 minutes in total, and ABC will follow with another 30 minutes of analysis.

ABC may list it as part of their 20/20 news show, as the town hall technically forms part of this series.

NBC announced earlier this week the President would speak at the same time.

The President will speak from the Perez Art Museum in Miami at 8pm ET (1am BST) until 9pm ET (2am BST).

Savannah Guthrie, co-anchor of NBC’s morning show Today will moderate the event, separated from the President by 12 feet.

The National Institute of Health said they have extensively tested Mr Trump, who is “not shedding infectious virus.”

NBC’s decision to run the event at the same time as Mr Biden’s has incensed people across the US, who want to hear from both candidates.

An inside source said the network was kowtowing to and enabling Mr Trump’s “bad behaviour”, while others – including a host of celebrities – have demanded them to change the slot.

They told Politico: “This is completely insane. We’re rewarding Trump’s bad behaviour and playing his game.

“The fact is this shows how NBC always helps the Trump brand. He was created here on ‘The Apprentice.’ He got a W-2 from here just like I do.”

He said in a statement: “We share in the frustration that our event will initially air alongside the first half of ABC’s broadcast with Vice President Biden.

“Our decision is motivated only by fairness, not business considerations.

“We aired a town hall with Vice President Biden on October 5 at 8 pm. If we were to move our town hall with President Trump to a later timeslot we would be violating our commitment to offer both campaigns access to the same audience and the same forum.”

Every adult in UK could receive Covid-19 vaccine by Easter, scientists claim