The United States and the European Union have imposed sanctions targeting a number of senior Russian officials and businesses over the attempted murder and jailing of opposition leader Alexei Navalny.

The 27-nation bloc imposed bans on travel and froze the assets in Europe of four members of Vladimir Putin‘s inner circle. They are:

An EU statement said the four were listed “over their roles in the arbitrary arrest, prosecution and sentencing of Mr Navalny, as well as the repression of peaceful protests in connection with his unlawful treatment”.

Meanwhile, the US announced sanctions of its own against Russian officials and businesses. Senior members of president Joe Biden‘s administration did not immediately identify the Russian officials named in them.

Fourteen businesses, most of which it said were involved in production of biological and chemical agents, have also been targeted.

One official, who briefed reporters on condition of anonymity, said the sanctions would be the first of several steps by the Biden administration to “respond to a number of destabilising actions”. 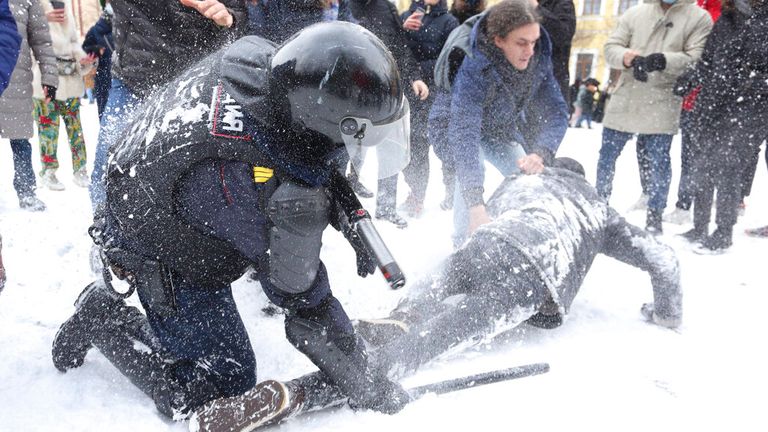 Mr Biden has pledged to confront Mr Putin for alleged attacks on Russian opposition figures and hacking abroad, including of US government agencies and US businesses.

Mr Navalny, an anti-corruption investigator, was arrested in Moscow in January upon returning from Germany, where he spent five months recovering from a nerve-agent poisoning that he blames on the Kremlin.

Russian authorities have rejected the accusation.

In February, a court sentenced the 44-year-old to two years and eight months in prison for violating the terms of his probation while recuperating in Germany.

The sentence stems from a 2014 embezzlement conviction that Mr Navalny has rejected as fabricated.