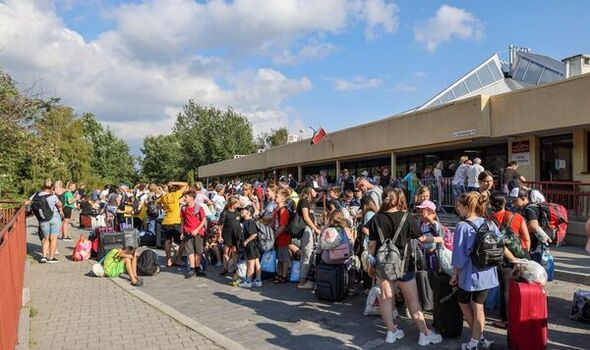 After more than six months of war, and the mass exodus of around 10million people, many are now seeking to return to their homeland.

And as the Ukrainian military was yesterday involved in a huge new counter-offensive to drive the Russian army out of the country, thousands were busily trying to get back after fleeing to neighbouring countries.

Hundreds of these were seen queuing at the Przemyśl Główny station in Poland as they sought to get a train back into Ukraine.

It was revealed earlier this month that the number of people fleeing Ukraine since the war began hit the 10million barrier for the first time, the United Nations announced.

The UN’s Refugee Agency reported that the number of border crossings from Ukraine passed the 10 million milestone for the first time since Russia invaded the country.

In total, it said, some 10,107,957 border crossings from Ukraine have now been recorded since the invasion began on February 24, the agency’s tally showed.

A spokesman for the UN refugee agency said: “We are urgently upscaling relief operations across Ukraine and in neighbouring countries to support fleeing civilians. Urgent needs include shelter, relief items such as blankets, and specialist protection – all rely on voluntary donations.”

More than half of those to have been displaced in the country are understood to have been children, with the vast majority of refugees fleeing to the neighbouring countries of Poland, Hungary and Romania.