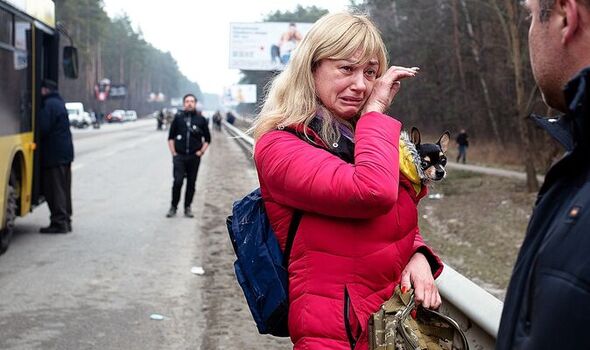 Cowardly Russian troops homed in on civilians fleeing an under-fire Kyiv suburb – killing three members of the same family. A mother and father with a teenage son and young daughter were hit when a shell landed near them. Soldiers rushed to help, but the woman and children died. The father had a pulse but was unconscious and badly wounded. Their luggage, a blue roller suitcase and some backpacks, was scattered nearby with a green carrying case for a small dog that was barking.

The sickening incident came as bombs rained down indiscriminately on Irpin, 12.5 miles north-west of the capital, as forces try to batter the city into submission.

A bridge linking Irpin and Kyiv was blown up by Ukrainian soldiers to halt the Russian advance.

But it made the escape more hazardous for those desperate to join the 1.5 million-plus who have reached neighbouring nations.

Poland has taken in one million of those refugees.

Small groups of civilians were seen making a daring dash across a section of exposed road, aided by Ukrainian soldiers, when they were struck. Some were seen cradling pets as they made the exodus.

Despite Ukrainians being urged to stay and fight, many tried to leave at the sight of the heavily-armed Russian troops. One said: “They’re shooting at everything. They’re not shooting at anything special – just shooting everywhere and at everything.”

Russian forces continued to shell heavily-­populated areas in the face of a global outcry.

United Nations monitors estimate 350 Ukrainian civilians have been killed in the past 11 days but acknowledge the real death toll is likely to be “considerably higher”.

The UK’s Ministry of Defence (MoD) confirmed a second ceasefire attempt in Mariupol failed to be upheld by Russia yesterday.

The southern port city has been heavily shelled for days. The MoD said: “For the second day in a row, a ceasefire agreement to enable the evacuation of civilians failed.

“The ceasefire was scheduled between 10:00 and 21:00 local time, but the agreement was ­violated within hours.”

The MoD added that Russian artillery strikes on Mariupol “have likely remained at the high level seen in recent days”.

The ceasefire was supposed to provide a safe corridor for some 200,000 people to flee. But it was reported just 300 got away.

Those who remain are penned in as food runs low, water and power have been cut off and chemists have no medicine.

Sergei Orlov, the deputy mayor, said officials had seen dead bodies on the street, but the danger from rocket fire was so grave they could not be retrieved. He added: “They continue to destroy this city, they continue to kill people on the street. There is no safe place.”

Russia also reportedly ignored a ceasefire in nearby Volnovakha, a city of 21,441.

Putin is now feared to be targeting Odesa on the Black Sea coast – the country’s main port.

Controlling the cosmopolitan harbour city which was home to one million people would be key to choking Ukraine’s economy.

Zelensky urges Russians to speak out against Putin

In a video address Ukraine’s President Volodymyr Zelensky warned: “They are preparing to bomb Odesa. Odesa. Russians have always come to Odesa. They have always felt only warmth in Odesa. Only sincerity. And now what?

Russian forces were also firing at a physics institute in Kharkiv, in the north, which contains nuclear material and a reactor, said Ukraine’s national security service.

The nuclear power plant at Zaporizhzhia, the biggest in Europe, is now under the orders of the Russian army command after it fired on the site last week before taking control.

The International Atomic Energy Agency (IAEA) said it had been informed by Ukraine that Russian forces have switched off some mobile networks and the internet so reliable information from the site cannot be obtained through normal channels.

The IAEA insists staff must be able to fulfil security and safety duties and make decisions free from undue pressure.

Turkey, a member of Nato and a historic ally of Russia, shares a maritime border with both countries in the Black Sea. It has described Putin’s onslaught as “unacceptable” and offered to host talks, but has so far refused to enforce economic sanctions on Moscow.

Putin told Mr Erdogan he would only halt his assault if Ukraine stopped fighting, adding his “special military operation” was going to plan.

Russia has warned neighbouring countries against hosting Ukraine’s warplanes, saying it may consider it a part of the conflict if combat missions are flown from their territory.

Russian defence ministry spokesman Igor Konashenkov claimed some Ukrainian combat planes had redeployed to Romania and other countries he would not identify.

The UN has called the humanitarian emergency the fastest growing refugee crisis in Europe since the Second World War. While World Health Organization chief Tedros Adhanom Ghebreyesus said there had been “several attacks” on health centres across Ukraine which had caused “multiple deaths and injuries”.

Pope Francis said Ukraine was being battered by war but stopped short of publicly condemning Russia by name during his weekly address to crowds in St Peter’s Square, Vatican City.

But he said: “In Ukraine rivers of blood and tears are flowing. This is not just a military operation but a war which sows death, destruction and misery.”

Ukraine’s military command say more than 11,000 Russian troops have been killed since the war started on February 24, alleging invading forces had suffered the loss of 2,000 units of enemy weapons and military equipment, including 285 tanks, 44 aircraft and 48 helicopters.

Russia claimed its losses were far fewer, saying 498 troops had been killed with 1,597 more suffering injuries.

UK military intelligence said Russian forces were targeting populated areas but the strength and scale of Ukrainian resistance was slowing the advance.

The Ministry of Defence said the depth of resistance from soldiers and armed civilians, some of whom have chased invading forces in street-to-street battles “continues to surprise Russia”.

This has triggered “targeting populated areas in locations including Kharkiv, Chernihiv and Mariupol”.

And in a chilling reminder of the destruction of Grozny, the capital of Chechnya, and Aleppo, in Syria, where Russia neutralised opposition forces of dictator Bashar al-Assad, the MoD added: “Russia has previously used similar tactics in Chechnya in 1999 and Syria in 2016, employing both air and ground-based munitions.”

He added: “Attacks on healthcare facilities or workers breach medical neutrality and are violations of international humanitarian law.”

Mr Putin continues to blame the war solely on Ukraine and said: “If they continue to do what they are doing, they are calling into question the future of Ukrainian statehood. And if this happens, it will be entirely on their conscience.”

DOWNED Russian fighters dragged from their planes sobbed that they were just “following orders” after being captured by raging Ukrainian civilians. Nine aircraft were shot down in one day over the war-ravaged country this weekend. Putin’s airmen were swiftly rounded up and handcuffed. Some had suffered serious injuries.

A video of two airmen shows them being interrogated, with one captor saying: “You are killing our people, you b******.” One pilot begs for mercy as he says he was just “ordered to fly”, claiming he was on a rescue mission. Other footage shows a bloodied Russian pilot saying he was “not told anything” about his mission.

“Were you blind?” one man replies, as troops report that they seized maps from his jet showing bombing runs.

Despite having one of the largest and best-equipped air forces in the world, Russia has failed to secure air superiority over Ukraine. Putin has warned Nato and its allies that a no-fly zone over the country would be “participation in an armed conflict”.

Russian airstrikes have killed hundreds of innocent civilians so far. Ukraine says its forces have shot down 44 planes and 48 helicopters – as well as blowing up 285 tanks, 985 armoured cars and 60 fuel tankers.

In a major propaganda coup, a Russian gunship helicopter was blown out of the sky by a missile over Kozarovychi, near Kyiv.

On Saturday a humanitarian corridor was arranged to allow civilians in Mariupol to escape the fighting. The exodus was abandoned as Russian forces continued to shell the city.

A further effort, also disrupted by Russian breaches, began yesterday. This amounts to a test of Russia’s resolve to allow civilians out of other besieged cities before intensive attacks are launched.

Meanwhile, Russia’s offensive grinds inexorably on, with a land corridor pretty much established between Crimea and Donetsk, a key Putin objective.

Much of the Sea of Azov and Black Sea coastlines are under Moscow’s control. Russian forces continue to push west to Odessa which, when taken, will effectively deny Ukraine all its sea ports.

In the north, Russia continues its onslaught against Kharkov and is progressively encircling Kyiv.

Unless talks lead to a diplomatic breakthrough — likely President Zalensky’s capitulation — it is hard to see how the Russian army does not eventually overcome the staunch resistance.

Ukraine claims to have killed 11,000 Russian soldiers. Russia says only 500 have died. Neither can be believed. There are indications Moscow’s best troops are not even fighting in Ukraine but remain on standby in Russia. US intelligence estimates Putin has only committed 75 of the hundreds of aircraft readied for the invasion. Some reports suggest risk averse use of those planes that are fighting. Why?

It must be assumed Putin is preserving the cream of his land and air forces for a phase 2 — somewhere beyond Ukraine.

Other than Putin’s downfall, the one thing that could deter such planned future aggression is direct Nato engagement in this war, which would, of course, carry enormous risks of escalation.

That was excluded on Friday when Nato foreign ministers, further cowed by Putin’s nuclear threats, rejected Zelensky’s call for a no-fly zone over Ukraine.

Organizing a Union in the Disorganized World of Small Restaurants