After powerfully strong winds on Friday, the UK is set to see a dramatic fall in wind speeds. But the South East of England and Wales, which suffered the worst of the weather, will still see wind speeds up to 61.1km per hour (38mph) before tapering off by the end of the weekend. The rest of the UK will still feel the breeze, but with intermittent sun and showers throughout the weekend.

He added: “With these occlusions bringing some more prolonged rain at times, there’s a wet spell for the northwest Highlands.

“And around lunchtime there’s some heavy rainfall into Northern Ireland that moves by the afternoon into north Wales, northwest England and southern Scotland – otherwise it’s scattered showers generally.

“There will be a greater chance later on Saturday of the weather quieting down a little in the south, with the winds less strong and a bit more sunshine coming through.” 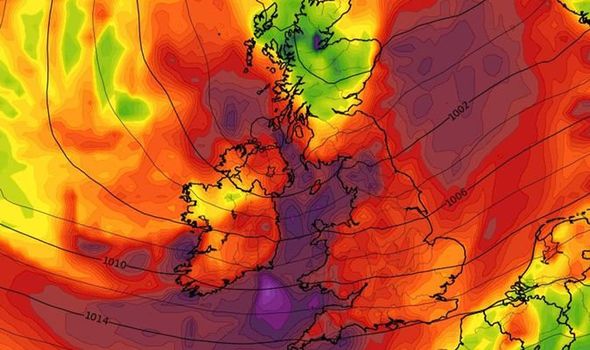 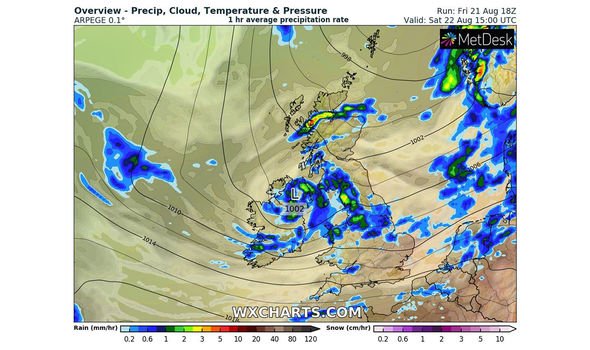 Low pressure causing the strong winds will begin to move away from Norway today, but will still blow across the UK.

Locally wind speeds will gust between 30 to 40mph, particularly in the West of England and Wales.

Despite the worst being felt on the west coast, by 4pm wind speeds of 39mph will crash into the East of England.

Northern Ireland and the West of Scotland will have moved past the pressure front, and see lighter breezes up to 24mph. 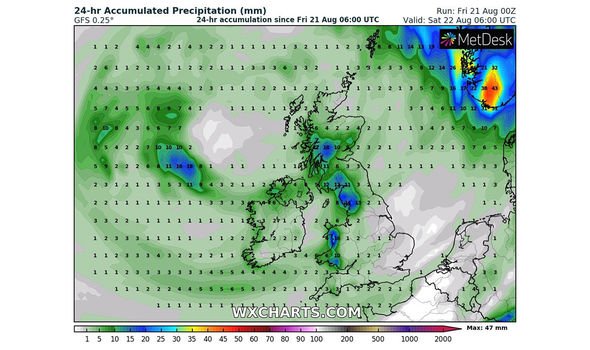 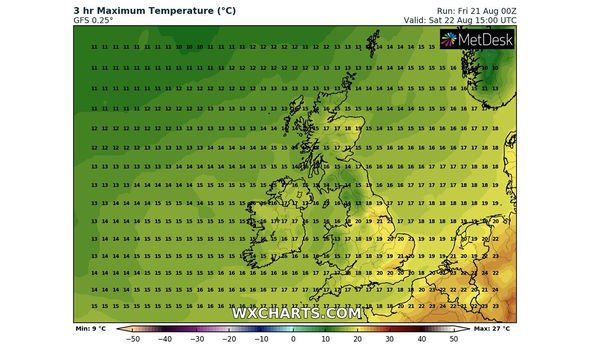 Intermittent showers are likely to be spotted throughout the UK today, with rainfall up to 4mm per hour.

Heavier showers of rain are set to soak central and northern parts of the country, where conditions are cloudier.

The Southern and Eastern parts of England will see the least rain however, and should be drier for longer periods and brighter.

London will see some spells of rain, but only 2mm per hour with South East England and Anglia seeing the longest periods of sunshine today.

Temperatures are set to remain balmy despite the fast gusts and showers.

Camborne in the South West and Dumfries in Scotland will see temperatures up to 17C (62.6F).

London and Norwich will enjoy highs up to 22C (71.6F) along with relatively clear skies by the afternoon.

Moving into the evening, temperatures will stay consistent and cool at 16C (60.8F). 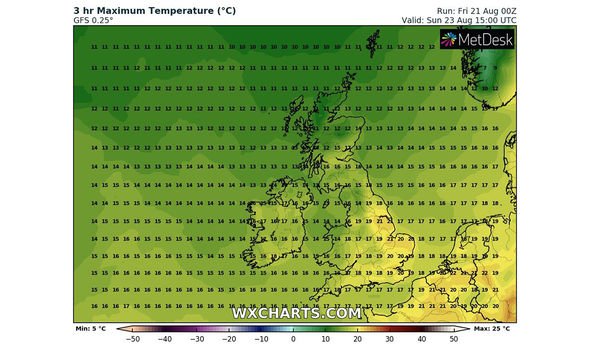 Winds are set to continue dropping on Sunday, with the Norwegian pressure continuing to move into the North Sea.

The South West and Wales will get relief from the heavy gusts, with wind speeds at a more reasonable 17mph by midday Sunday.

The Midlands will see a dramatic drop in wind speeds with an almost still 8mph by 4pm.

Scotland will have some north-western breezes coming from the Atlantic Ocean, but will still enjoy gentler winds than it has seen over the past few days.