An easterly flow is predicted to bring warmer temperatures from Continental Europe next week following a bitterly cold February. The latest temperature models from Netweather show 13C hitting south-eastern parts of England on Tuesday, March 2 at 6pm, including Kent. Further north, the Yorkshire Dales could see highs of 11C on the same day, while the Lake District and Cumbria peak at 10C.

In the north-west, Liverpool should be slightly colder at 9C and Scotland could see 10C in eastern and western parts.

Hot air also appears to push over in an easterly direction from Europe on Tuesday, as the latest temperature anomaly models at WXCHARTS turn different shades of orange and red.

Paul Michaelwaite at Netweather expected easterly winds to allow sunshine to push through in the west, although temperatures will only rise slightly.

He said: “High pressure is now well in charge of the UK’s weather and looks set to stay that way into next week as well. 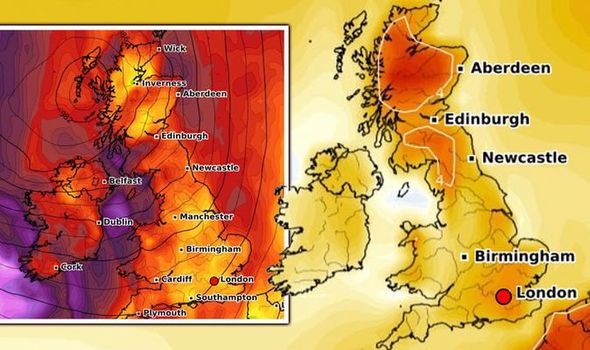 “That means a lot of settled, dry, and for the weekend at least, sunny weather.

“Into Monday, with an easterly flow becoming more pronounced, the early mist and murk will have more trouble clearing in many central and eastern parts, leaving the west the best of but still not all of the sunshine.

“Where the sun does break through, 10-12c is likely, but under the cloud, 6-8c will be more like it and feeling chillier than that in the wind.

“The northern half of Scotland bucks a couple of trends though, with lighter winds and more sunshine, even in the east, but head to the far north and northwest, there could be more cloud again as Atlantic fronts brush nearby, and here the winds will be in the west rather than east.” 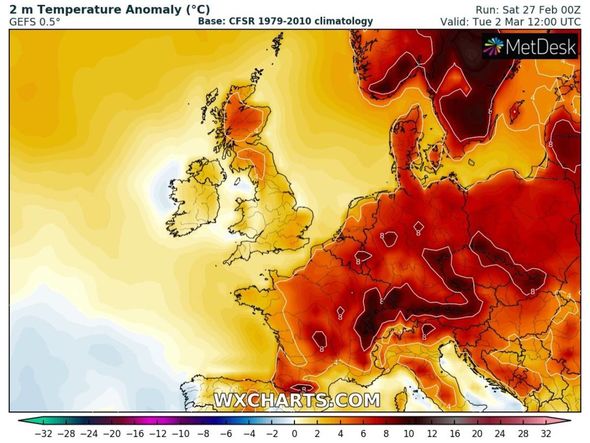 He said: “Most of the UK has dry weather this weekend but there will be light rain in parts of the north today.

“Daytime temperatures remain above the late February average, however the nights will be chilly.

“The meteorological spring starts on Monday with quiet conditions.” 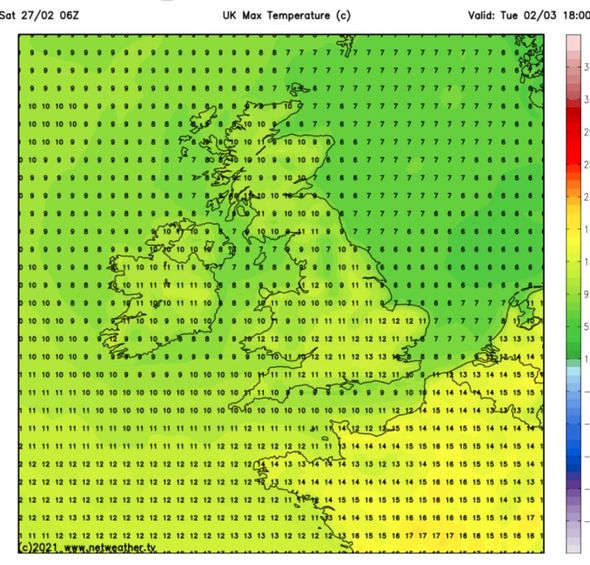 The BBC’s weather forecast added air will push in from the continent over the coming days as temperatures stay mild and sunny.

The forecast between Saturday, February 27 and Sunday, March 7, said: “February is set to close on a fine note with high pressure providing for a largely dry and in places rather sunny weekend.

“There will be plenty of cloud around for some though, especially northern areas on Saturday, and eastern areas on Sunday.

“There is potential for low cloud to make things rather dull for some on Sunday too. Nights will tend to be mostly clear and chilly with frosts for many and some patches of dense fog too. 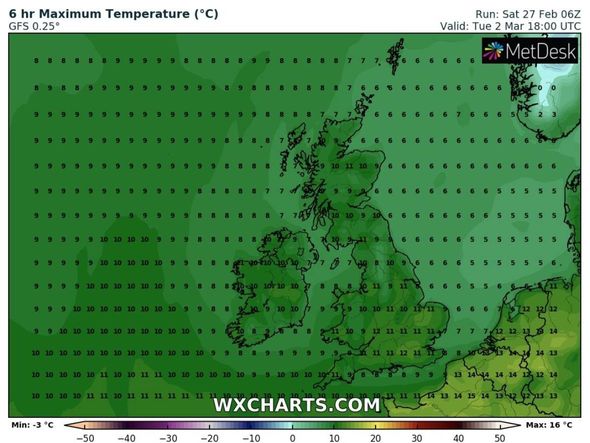 “As we head into the first week of meteorological spring, high pressure will stick around overhead throughout the working week.

“This will keep things similar to the weekend, with temperatures near normal, some afternoon sun with light winds, and chilly, often frosty nights.

“However, there is a wrinkle in the forecast, especially early in the week.

“As light winds drag some air from the continent into England via the North Sea, there is potential for quite a bit of low cloud to develop.”

The Met Office added sunshine is likely to occur next week before temperatures briefly cool later in the month. 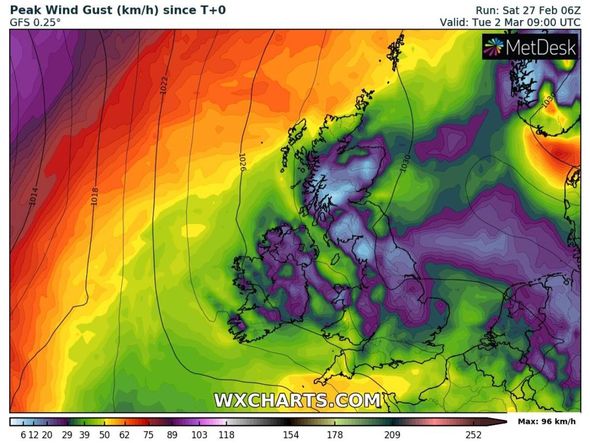 The long-range forecast said: “High confidence for this period as local high pressure is likely to give a mostly settled outlook, with any uncertainty existing with respect to the orientation of this high.

“Currently the signal suggest a placement over the south of the UK before transferring to the north later next week.

“This means most areas will stay fine and dry with plenty of sunny spells, and that any spells of rain and stronger winds are most likely to the far north and west of the UK where front incursions are most likely.

“Temperatures are likely to remain around average for this time of year, however a short cold spell may occur near the end of this period. Where skies clear overnight frost and fog patches may become prevalent.”