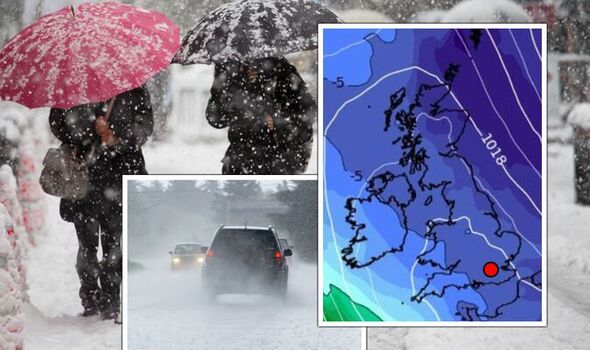 Temperatures will rise into double figures after the weekend although rather than blue skies and sunshine, Britons face heavy downpours and gales.

The change will be driven by weakening high pressure to the west allowing low-pressure systems to hurtle into the UK carried on the jet stream as it swoops over the country.

Wet and windy weather will hold out through the week turning to snow as it reaches colder air over Scotland and northern England.

Then another freezing blast ahead of the weekend will push temperatures widely back below freezing, according to some forecasters.

Jim Dale, meteorologist for British Weather Services, said: “There is no sign yet of any return to the warm and sunny weather that we saw at the end of March.

“Temperatures will move back towards average at the start of the week, but this will be accompanied by more unsettled conditions from the Atlantic.

“This is the start of a balancing effect commonly seen with the weather.

“It was very dry and settled throughout March, especially during the final part which brought fine conditions, but this is now about to change to something wetter.”

Temperatures will hover around the early-April norm until Wednesday when colder winds drive in from the north, he said.

He added: “Winter can always bite back at this time of year, and well into April.

“It is going to turn colder again towards the end of the week, and there will be the risk of further snow.

“A polar front will move southwards bringing much colder conditions in from the north again.”

Temperatures in parts will dip slightly on Monday bringing the risk of wintry flurries to north-eastern Britain, according to the Met Office.

Thermometers will fluctuate with heavy rain a risk through the week as high pressure to the west weakens.

“By later next week the jet stream becomes flatter still and more active areas of low pressure become closer to the northwest of the UK.

“There will be some strong winds especially in the northwest and spells of rain bringing plentiful rainfall across the country through next week.”

Moisture-laden low-pressure systems from the Atlantic will crash into cold air over parts of Britain brining heavy snow.

Scotland and the north will be most at risk with heavy wintry downpours most likely over hilly and exposed regions.

Temperatures may hit 15C across southern regions at the start of the week, according to Netweather forecaster Ian Simpson.

He said: “The weather looks set to be somewhat more unsettled next week.

“Rain will spread south-eastwards across the country on Sunday night into Monday.

“On Tuesday, brighter weather with scattered wintry showers will move into the northern half of Scotland, while it will be cloudy elsewhere with some rain.

“As this precipitation pushes into the north of Scotland overnight on Tuesday and Wednesday, there is potential for significant snowfalls.”

Some forecasters reckon Britain is in for another freezing wintry blast at the end of the week.

“Some computer output suggests we may end the week in the company of some impactful wintry weather once more.

Australia's Melbourne clamps down in frantic bid to curb virus