A freezing cold front is making its way down the west of the UK from the North Atlantic, according to the latest snow probability models from WXCHARTS. The weather charts show Scotland is expected to bear the brunt of the wintry blast as the charts turn a deep shade of red from Wednesday until Friday morning, suggesting there is 90 percent chance of snow. Soon after the charts turn deep blue and purple – meaning there may be 40 to 60 percent chance of snow – over western parts of Scotland including Ayreshire and Loch Lomond across a five day period until Monday.

Regions as far south as Bournemouth turn blue during this period, while also covering Birmingham, Manchester and Liverpool along the way.

On Monday, the charts turn a faded blue, meaning there is only a small 10 percent chance of snow.

Temperatures are also forecast to plummet to bitterly cold lows of -4C in western Scotland and -3C in Liverpool on Thursday evening, weather maps by WXCHARTS suggest. 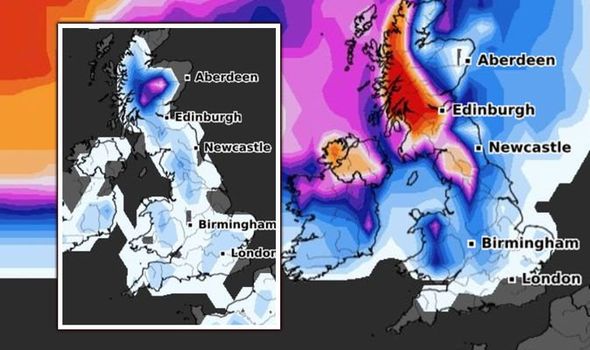 He said: “This evening, the showers will continue in the west with snow starting to accumulate up over the hills of Scotland, Northern England and Wales.

“Where skies clear across Scotland and Northern England, it’ll be a cold night with a hard frost forming in places. Further south, with more cloud, it’ll stay milder.

“Into Thursday and with low pressure both to the north and south of the UK, it’s fair to say it’ll be a messy, unsettled kind of day.

“The showers, which will have started the day most affecting the west and north will quickly spread east through England and Wales.

“They’ll be wintry over the hills in particular, with rain mostly falling lower down, but in the heavier bursts and into the evening some sleetiness or wet snow is possible to lower levels as well.

“As the southern low becomes the dominant player during the day.” 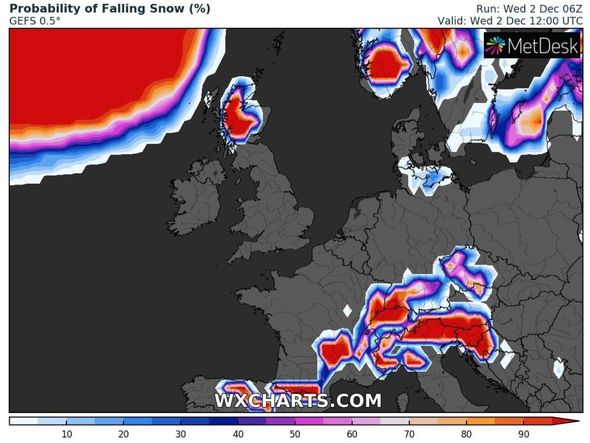 Mr Michaelwaite added snow could hit some regions over the weekend.

He said: “Looking ahead to the end of the week, and into the weekend. We’ll keep low pressure overhead or nearby, so there’ll be further spells of showery rain, sleet and snow.

“With colder air in situ, we’ll also see temperatures fall away quickly during clearer spells, with frost and ice forming.”

BBC Weather’s forecast for this week said snow may linger until Monday as low pressure moves in.

The forecast said: “On Wednesday a weak frontal system moves south east across the UK, bringing rain and then colder air. This front will be followed by a deepening low pressure system stalling over the UK between Thursday and Saturday. 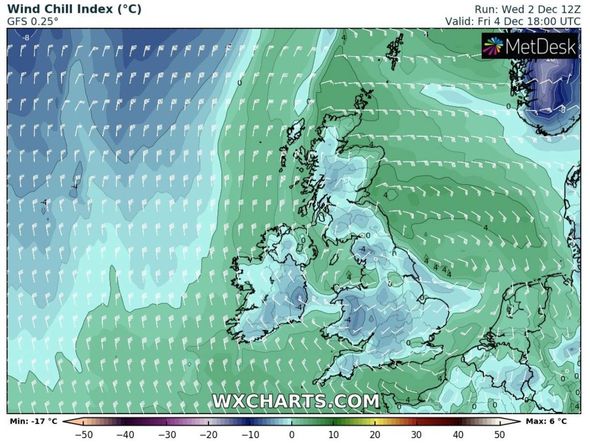 “This will bring rather miserable weather on Thursday, grey and wet with rain for all areas as well as increasing winds, peaking in strength on Friday when there will be an uncomfortable wind chill.

“There is the risk of hail showers for western regions, especially Northern Ireland, Wales and southwest England, while the best chance of any sunshine on Friday will be across Wales and southern and western counties of England. It will become cold enough Thursday to Saturday for some snow to get mixed in, especially over northern and western hills but possibly to lower levels in Scotland at times. Some sleet or wet snow cannot be ruled out further south but looks unlikely to be disruptive.

“By Sunday morning the low pressure system should be moving away southwards, leaving drier, sunnier, calmer but cold conditions. Frost, ice and fog patches on Sunday night. A few wintry showers will still be possible, especially for Northern Ireland and across northern and western areas of Scotland, Wales and England.

“Monday will see a new area of low pressure moving in from the east, introducing extensive cloud cover to northern, central and eastern areas with showers or longer spells of rain, sleet and hill snow moving west. Most snow of any consequence will be over the Pennines, Peak District and eventually southern Scotland.” 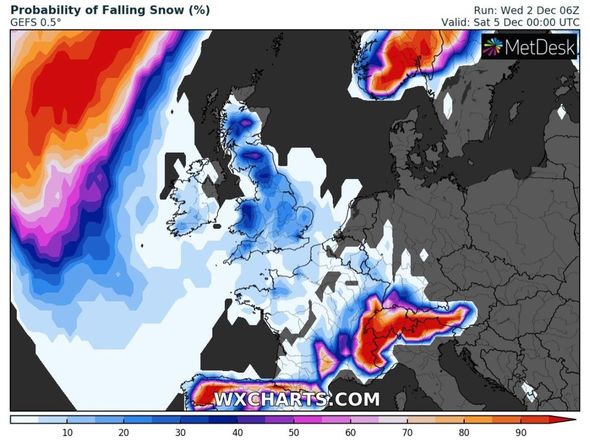 The Met Office has issued weather warnings for snow and ice from today until Friday at midday.

Areas affected are the highlands of Scotland, as well as more southern parts of the country, including Pert and Edinburgh.

The Met Office also warned of 10cm snow falling in some parts of western Scotland.

The warning said: “Frequent showers will increasingly turn to snow Wednesday night and persist into Thursday morning though these likely to fall as sleet and hail at times, mainly around coasts. 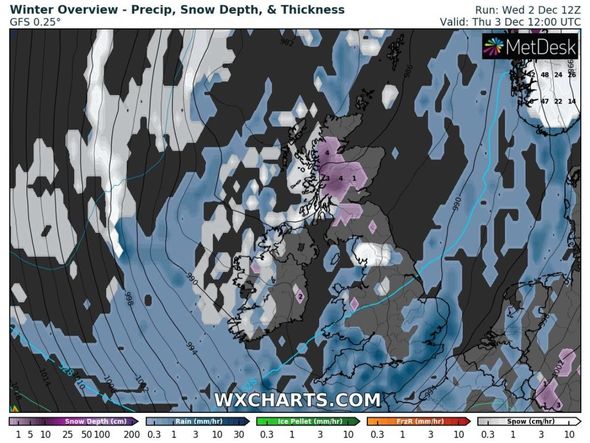 “Northwest Scotland looks most exposed to these showers with 2cm of snow accumulating by Thursday morning in places even to low levels. Larger accumulations are expected at higher elevations with 2-5 cm above 200m and up to 10cm over some of the highest routes.

“Snow is expected to arrive from the east overnight Thursday into Friday.

“Early on Friday morning, this may briefly settle across areas as low as 100m above sea level, although through the morning the accumulating snow level is likely to rise to 500m and above as milder air arrives from the east.

“Snow will then turn to persistent and at times heavy rain at lower levels. 2-5cm of snow is possible above 150m, with transient sleet/snow at lower elevations.

“Steadily increasing amounts are likely at higher levels; perhaps as much as 15-20cm above 400m, significantly affecting higher transport routes for a time before it turns to rain.”