Bitterly cold air from the north Atlantic is expected to bring wintry conditions over the festive period. Christmas Day could see up to 6cm of snow in Central Scotland by 6pm, according to WXCHARTS’ snow depth models. The charts suggest snow could linger until the end of December, with 8 inches forecast for the same region on Thursday, December 31 at midday. Meanwhile, the snow depth models show western Scotland will see just under 10 inches (25cm) on this date.

Temperatures are also expected to plummet to freezing lows of -7C in parts of Scotland on Monday, December 28, WXCHARTS has predicted.

The rest of the country could also see a cold Christmas Day with 0C forecast in northwestern parts of England including Manchester and even further south in London. 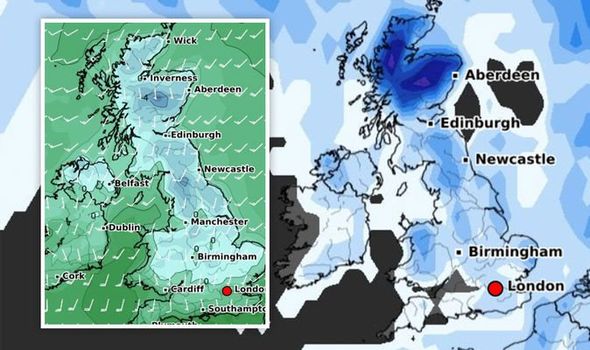 She told Express.co.uk: “As we begin Christmas week, it looks likely to stay unsettled, though it’ll feel a little cooler as northwesterly winds bring temperatures closer to average for this time of year.

“Looking further ahead to Christmas Day itself, whilst it is still too early to say with certainty what weather we can expect, there are some signs of high pressure developing which could bring a colder, drier and more settled spell around Christmas Day.”

The forecast said: “There is a potential for strong winds in the far south at first; at other times any strong winds are likely to be confined to the north and perhaps the east. 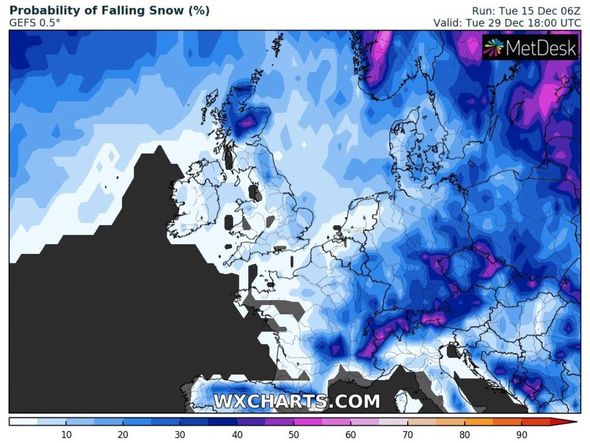 “Prevalence of overnight fog and frost is likely increasing, with fog potentially slow to clear during the daytime.

“Temperatures either close to or slightly below normal.”

The Met Office added new weather systems from the Atlantic could bring more unsettled conditions in the New Year.

The forecast for Tuesday, December 29 to Tuesday, January 12 added: “High pressure will probably be remaining the dominant pattern for the UK over the last days of December. 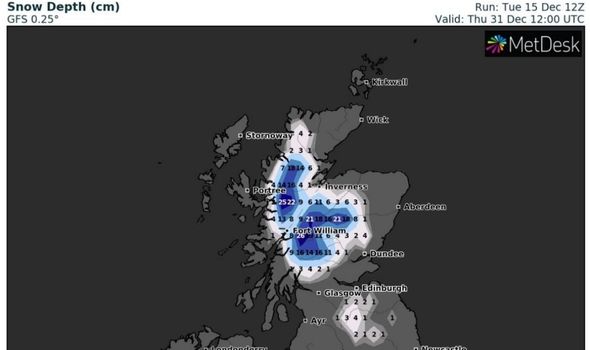 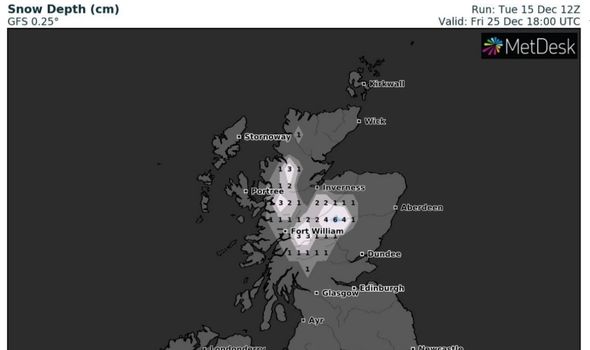 “This means a good deal of dry weather for many parts but with overnight frost and fog, with fog potentially slow to clear. Some periods of wetter weather may develop at times, most likely in the east.

“Into January confidence is low, although a change to more unsettled conditions with Atlantic systems moving in from the west is looking likely to occur during the first half of January.”

BBC Weather’s forecast for the end of December added: “As we head into the Christmas week, there will be little change.

“While cold polar air may well start to encroach over Scandinavia, our weather will still be coming in from the west, with a seemingly never-ending supply of Atlantic low pressure areas. 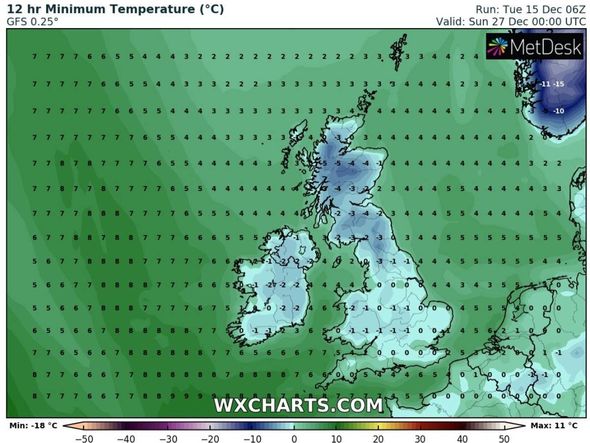 “Some unusually cold air for the time of year is likely over Canada during mid-December and this may linger into the Christmas week.

“Very cold air here, combined with the residual warmth of the north-west Atlantic ocean, helps to accelerate the jet stream.

“This is a high altitude belt of westerly winds above the north Atlantic.

“The jet stream will frequently be aimed straight at the UK, so this will help to steer the low pressure areas our way.”