The UK has already seen snow this year, with Essex and Cambridgeshire currently experiencing flurries, and the latest weather maps suggest the country is set for more this week. Forecasters expect the Scottish highlands to be blanketed by up to 13 inches (33cm) of snow on Friday, with the Met Office warning even the South East can expect snow by the end of the week.

Charts by Netweather show there is significant risk of snow this week for much of Britain.

By 6pm tonight, parts of Scotland and northern England can expect a 100 percent risk of snow, according to the forecasters.

The high chance of snow is indicated by the areas of red and white, which suggest between a 75-100 percent risk of snow.

Parts of east England and the south have a moderate risk of snow, shown by the green and yellow colourings.

The forecasters show similar snow risk is expected on Wednesday, with mainly Scotland affected by the wintry conditions. 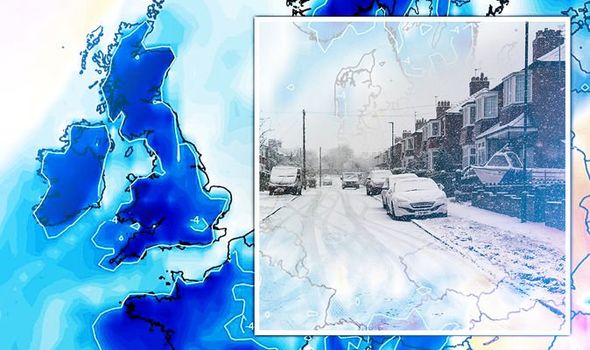 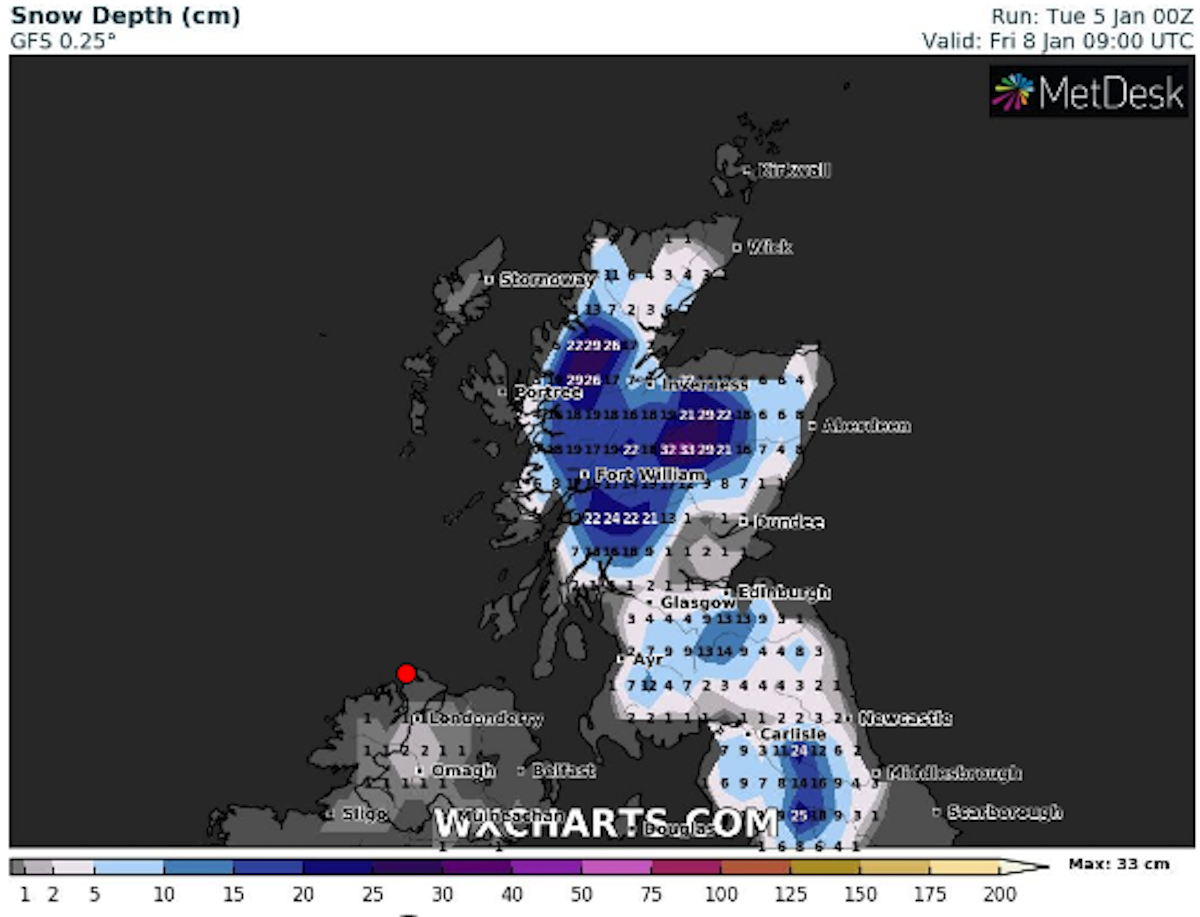 The risk of snow increases dramatically on Thursday, as the cold temperatures sweep further south.

The whole of Wales is seen to turn red, indicating a high snow risk, by 9pm, with parts of the north west and Scotland also showing high chances of snow.

By 6am on Friday the snow risk moves further south still, covering the West Country and parts of the capital.

Netweather’s snow risk chart shows almost the whole of Wales covered by a 100 percent risk of snow, and large swathes of the south of England turn red to indicate over an 80 percent chance of snow. 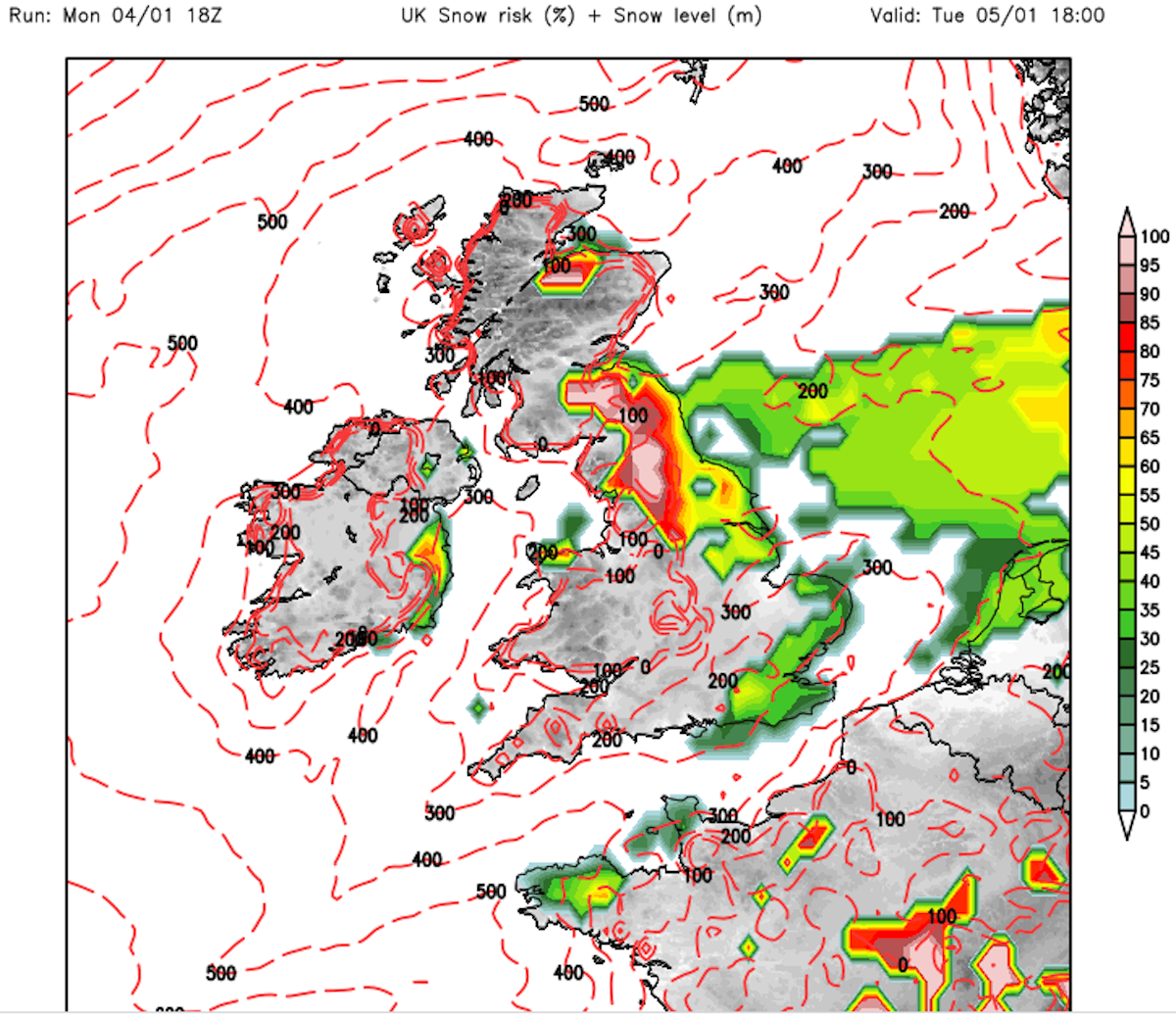 Large parts of Scotland are also covered by white colourings, which show the highlands are set for heavy snow.

WXCharts support this, and predict parts of Scotland will see as much as 13 inches (33cm) of snow.

The dark blue areas of the map show the north of Scotland is set for heavy snow by 9am on Friday.

The Met Office said the South East could see some snow by Friday but added: “If it happens, it won’t stay around for long.” 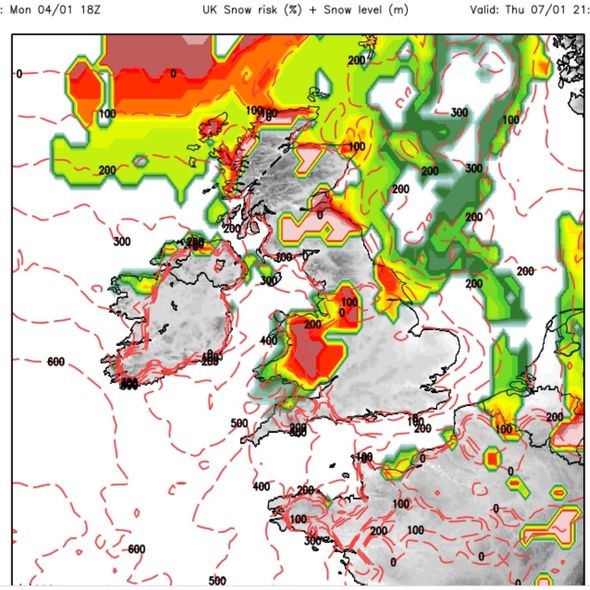 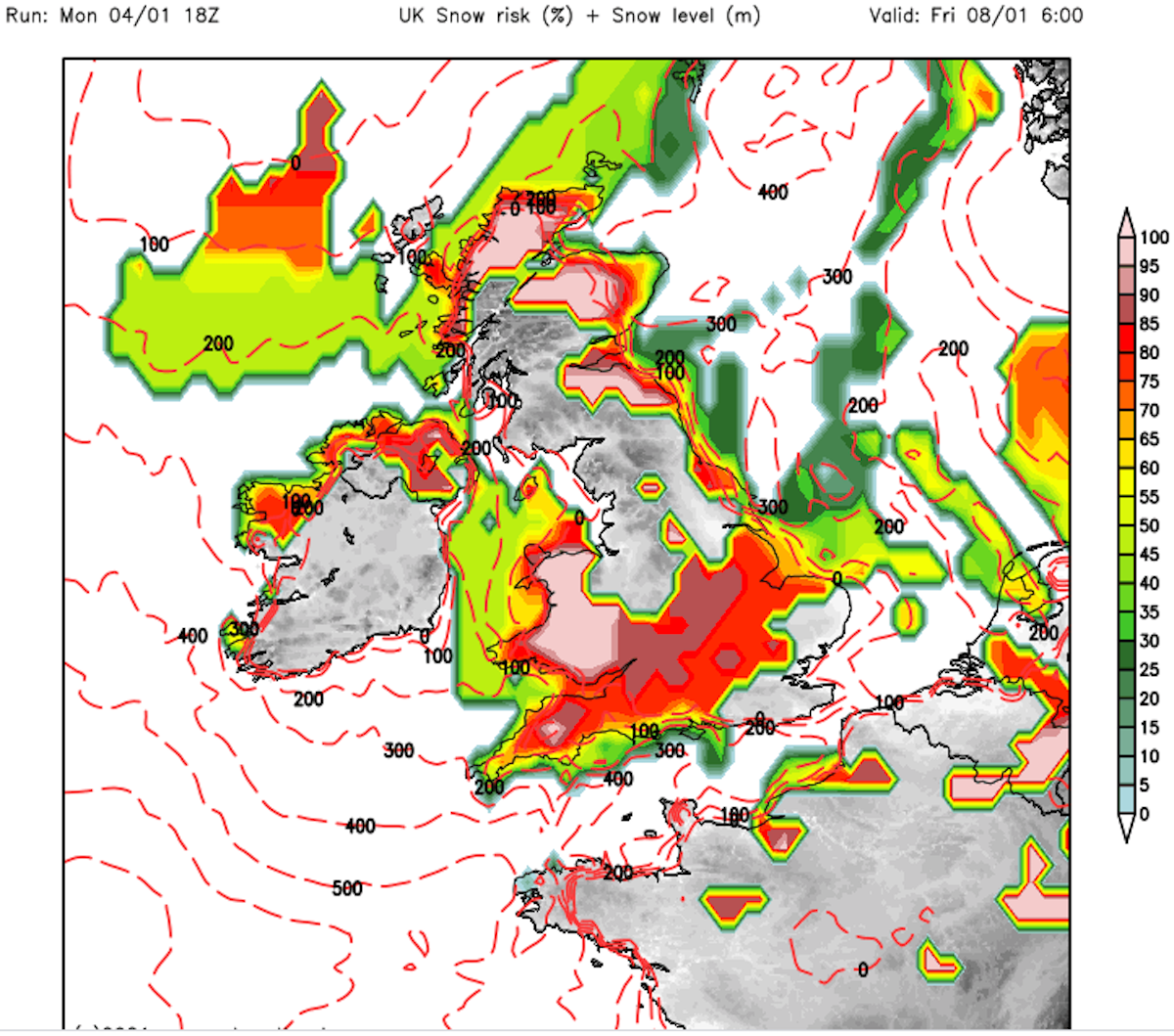 When discussing the outlook for Thursday to Saturday, the forecasters added: “Remaining cold with a weakening band of rain, sleet and some snow pushing southeastwards.

“Showers either side of this feature will be wintry, with these heaviest in eastern areas.”

The Meteogroup UK agreed the south could see some snow this week.

They said: “Thursday will be dull with thick cloud cover and there will be outbreaks snow across Scotland which will sink southwards during the day. A few snow showers possible further south.” 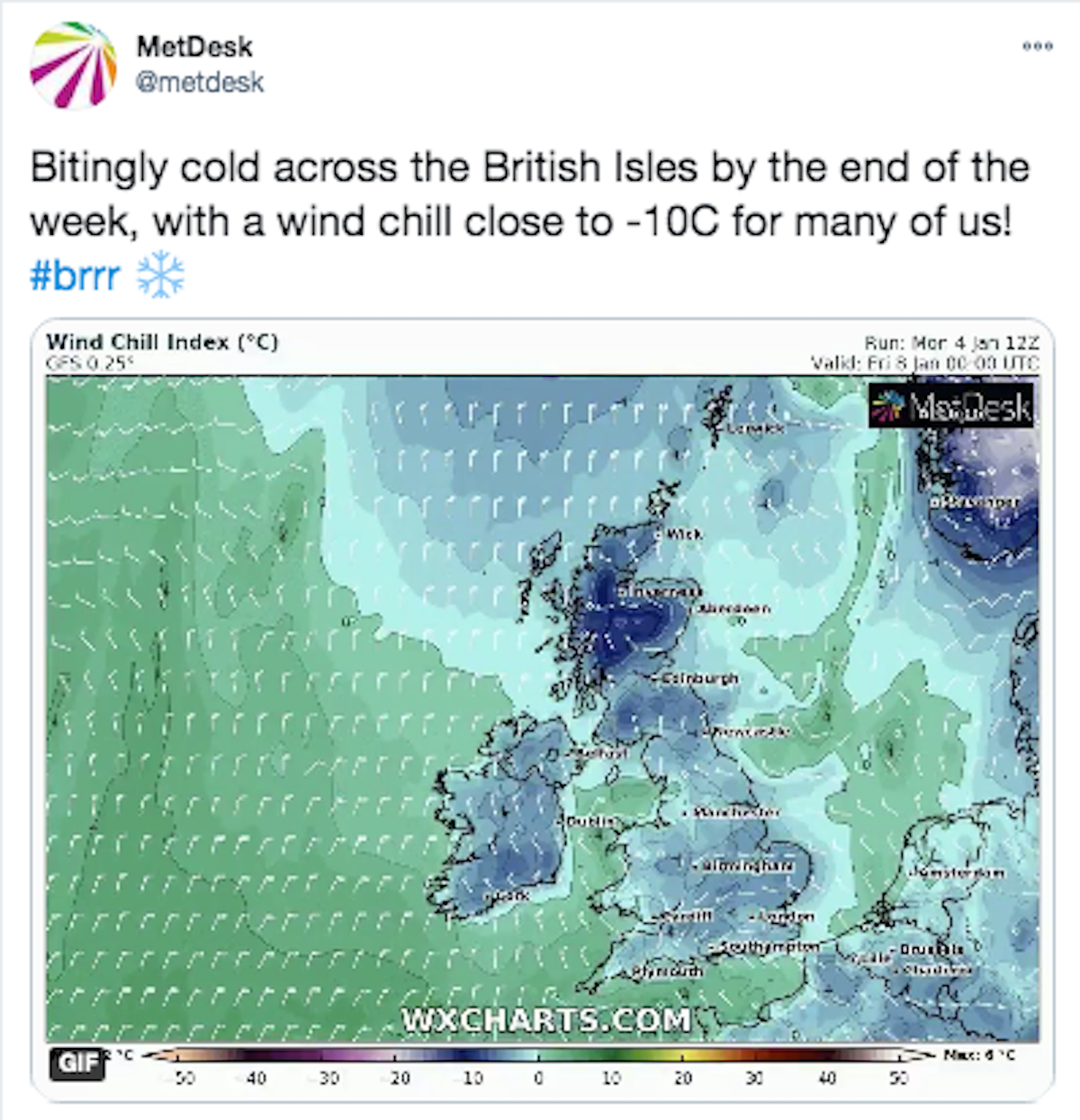 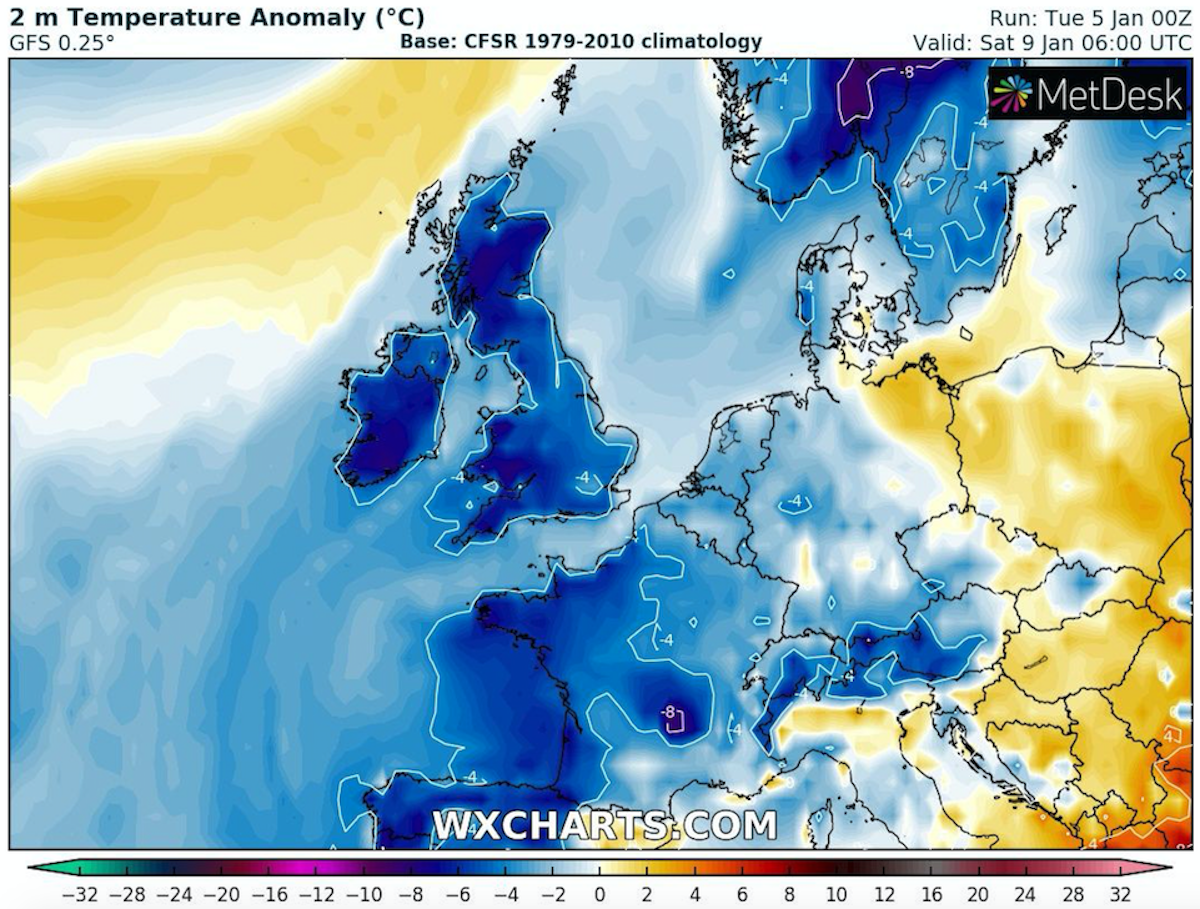 As well as the high risk of snow this week, temperatures are set to plummet.

The MetDesk warned this week will be “bitingly cold” with a wind chill close to -10C for much of the country.

While sharing WXChart’s windchill index map, they wrote on Twitter: “Bitingly cold across the British Isles by the end of the week, with a wind chill close to -10C for many of us!”

A second chart shows the UK turn dark blue on Saturday, as the mercury plummets to well below freezing.