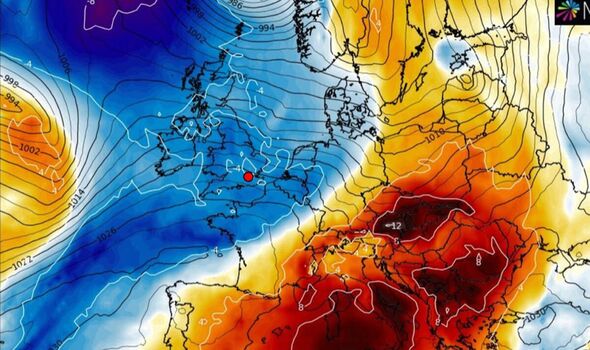 Britain’s mild Christmas will end tonight as a sub-zero swathe of Arctic air engulfs the nation. Up to four inches of snow is forecast in Scotland through the next 12 hours, while elsewhere stays mild and green. But a dramatic U-turn will see temperatures plunge before a swirl of Polar air sweeps the UK through Boxing Day.

Widespread snow is possible with flurries even possible to southern Britain, according to some experts.

Government forecasters have issued a warning for snow and ice across western Scotland until tomorrow evening.

“Cold air comes down from the Arctic through the next 24 hours, although it may stall halfway down the country and move away.

“However, Boxing Day is going to be much colder for many.”

Punters hoping for a festive flurry pay-out from the bookies anywhere away from north-west Britain will be disappointed.

Scotland is favourite for a White Christmas with an outside chance of a flurry across the fringes of northern England, according to Mr Dale, an independent adjudicator for some bookmakers.

He said: “Glasgow will be the favourite for Christmas snow, and maybe perhaps Inverness.

“Any wintry showers will be largely confined to the northwest of Britain, the Highlands of Scotland and the Grampians.

“We will be keeping a sharp eye on Manchester, Glasgow and Belfast, although the further south you go is likely to be on the mild side.”

The Met Office has issued a weather warning for up to four inches of snow across western Scotland from tonight until tomorrow evening with warnings to avoid travel in the area.

Met Office meteorologist Alex Deakin warned a change in wind direction from the north is about to thrust Britain back into the freezer.

He said: “It is going to be a mild day on Christmas day but later on as winds switch direction colder air may push back across the western Isles and Highlands of Scotland which could allow some late snow flurries here.

“As we go through the night, we do open the door to more snow showers coming in, and some very gusty conditions with snow showers peppering western Scotland as we head into Boxing Day.”

Scotland is likely to end the day under a blanket of snow while the rest of Britain lucks out on a White Christmas, he added.

He said: “A White Christmas is still likely in northwest Scotland with some snow shower here later in the day but for most places it is going to be a green Christmas and too mild for any snow.”

It comes as forecasters tussle over whether the cold will hold out into New Year or give way to another mild spell.

Weather models continue to fluctuate by day with some experts predicting warmer temperatures while others warn to stay wrapped up by the fire.

Mr Dale, author of ‘Weather Or Not?’, said: “It will ebb and flow fluctuating between colder and milder conditions through the coming days.”

“There is a possibility that an area of snow could sweep through the south or even the Capital later on Boxing Day.”