BBC Weather: UK to be covered in mist and fog

March is predicted to be hit with mixed conditions as bursts of cold and warmer temperatures could sweep over the UK. But spring-like highs are likely to grip the UK as the month progresses as high pressure moves over from a southerly direction – giving good signs for when Britain begins the long-awaited scale back from lockdown. Temperatures could soar to a balmy 14C in Surrey and Reading on Thursday, March 18, according to WXCHARTS.

Other parts of the south-east of England, including London and Kent could also bask in 13C on the same day.

Further north, there could also be double-figure highs as North Yorkshire is hit with 11C.

Brian Gaze at the Weather Outlook said the UK could bake in temperatures of 20C as spring progresses during the second half of the month, although it is still too early to confirm.

He told Express.co.uk: “At the present time I’m expecting an increasing chance of milder periods developing during the second half of March. 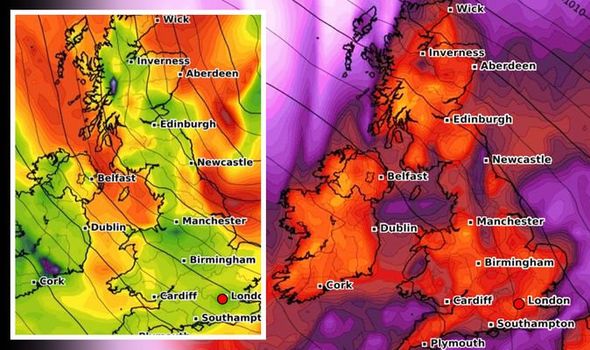 “The strengthening sun and longer days mean there is the potential for it to feel quite warm, especially in the south.

“The warmer conditions are most likely to come from the south or southwest.

“I wouldn’t be surprised to see 20C (68F) reached during this period.” 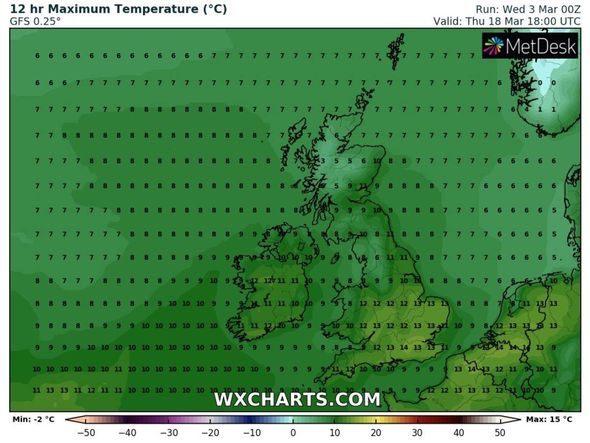 The outlook said: “This year seasonal computer models and recent climatology are favouring a warmer than average season.

“The signal for this is relatively strong in the context of the above.

“The signal for precipitation amounts is weaker, as is usually the case.” 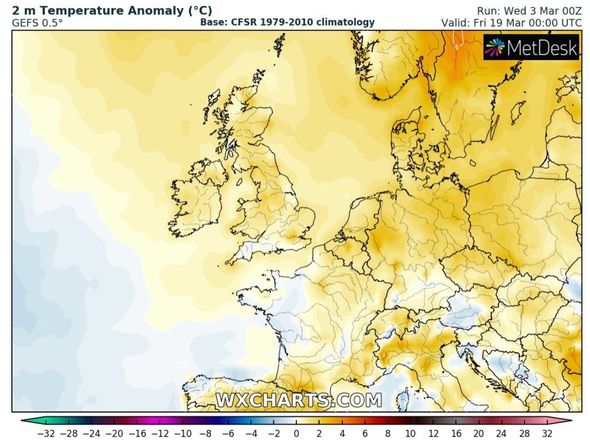 The long-range forecast between Tuesday 16 and Tuesday 30 said: “High pressure is expected to slowly sink southwards during Sunday with settled conditions confined to the far southeast of the UK, as cloud and spells of rain gradually push in from the northwest.

“A trend towards more unsettled conditions widely across the UK is likely through the beginning of next week, with spells of rain and showers spreading in from the west but also with some drier and brighter interludes at times.

“Through this period there is potential for windy conditions with the strongest winds most likely in the west and northwest of the UK.

“Temperatures are expected to trend from rather cold at first to closer to average, perhaps mild at times in the south. 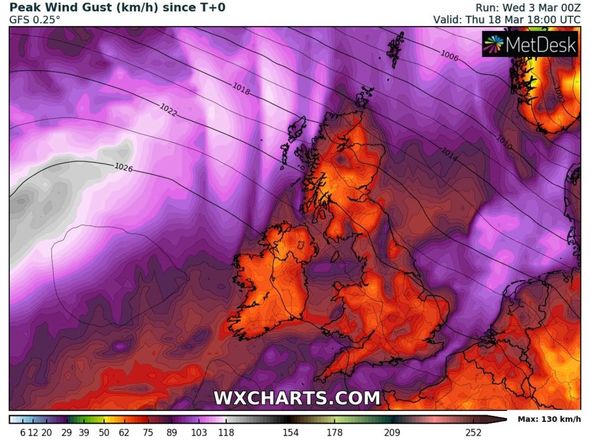 “During the middle of March unsettled conditions look likely to continue across the UK, with spells of rain and showers but also some drier and brighter interludes at times especially in the south.

“Temperatures are most likely to remain near to or slightly above average, with any colder intervals from the north short lived.”

The BBC also forecast conditions to be unsettled as March progresses, typical of British spring.

The long-range prediction between Monday, March 15 and Sunday, March 28, said: “The second half of March is shaping up to be locked into a fairly consistent large scale weather pattern for northern Europe (including the UK). 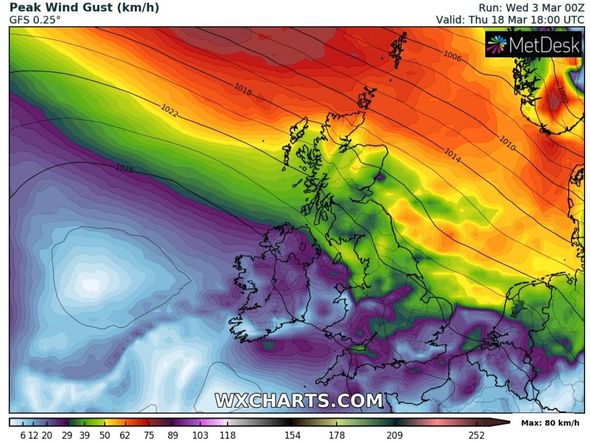 “We are expecting high pressure to be a dominant feature in the Central Atlantic and occasionally extend into southern Europe and the Mediterranean Sea.

“Meanwhile, low pressure will persist near Greenland and Iceland and also near Scandinavia and West Russia.

“This will send weather fronts through northern Europe frequently, keeping things unsettled and bringing some changeable temperatures, which is pretty typical for a British spring.”