UK hot weather has come and gone this month, despite the official beginning of summer coming on June 1. Weather forecasters have seen successive stormy systems touch down on the country, especially our the last week, with temperatures still struggling to pass the mid-teens. Officials expect this will soon change, however, with a rise in temperature on the horizon.

While Friday marks another inclement day for much of the country, the forecast for next week offers a ray of hope.

Weather maps from WXCharts, which gets its data from MetDesk, show a run of scorching conditions expected to bake Britain from Tuesday.

Maximum temperature maps for the UK show the country could see highs of 24C on Tuesday, June 23, extending up t0 26C on Wednesday as the heatwave spreads over much of the country.

Thursday will also see highs of 26C around London, although slightly cooler outside the capital at around 20|C compared to Wednesday’s 23C to 24C predictions. 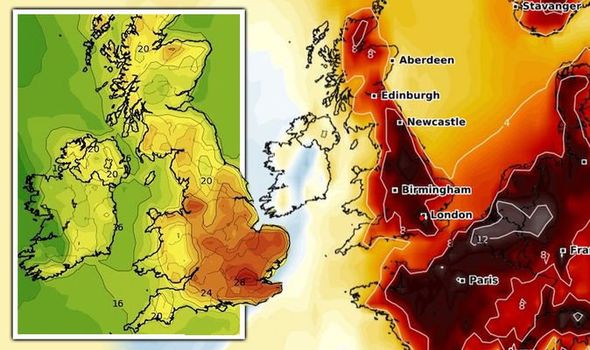 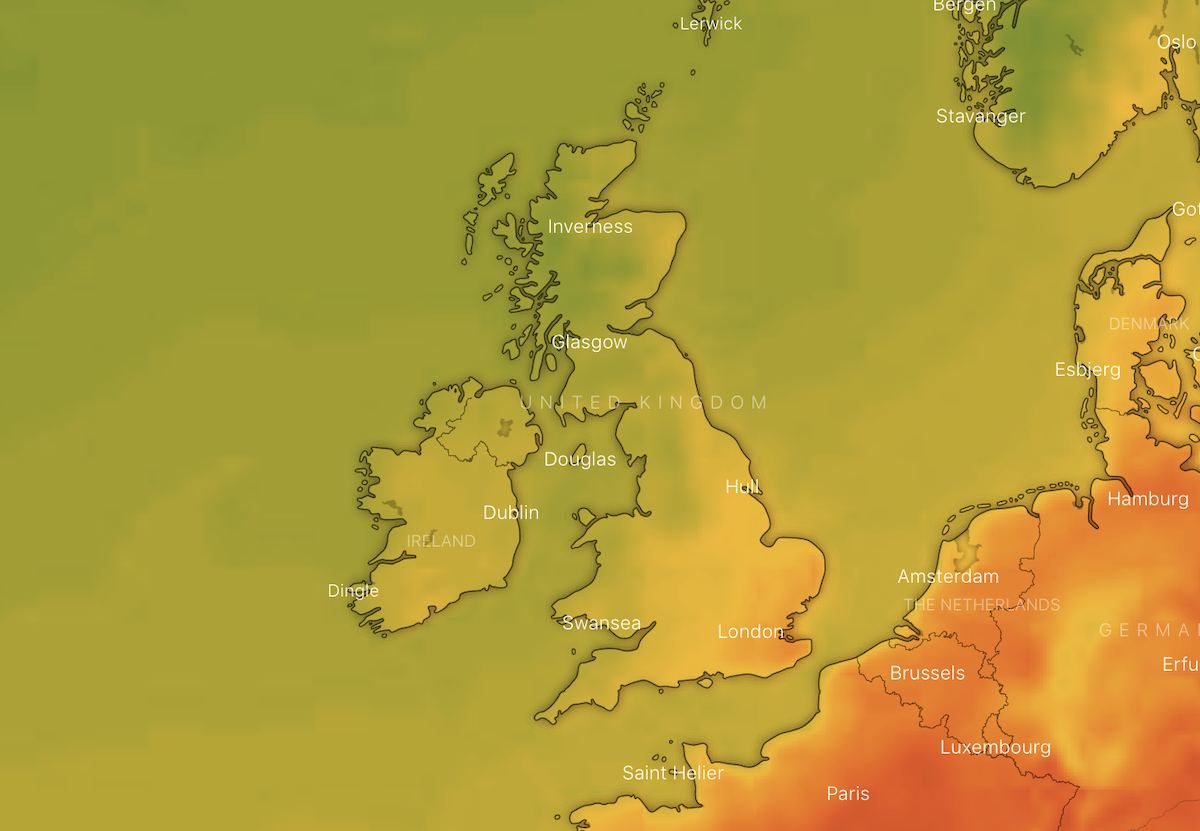 Come Friday, June 26, the temperatures will cool again, reaching highs of 22C across much of the country and 25C in London.

The 6-hour maximum temperature chart for Saturday, June 27 for 6pm shows much of England facing 24C and above – while London and parts of the south-east could see a scorcher 29C.

The mercury holds strong into Sunday, with highs of 27C forecast on the south-east coast. 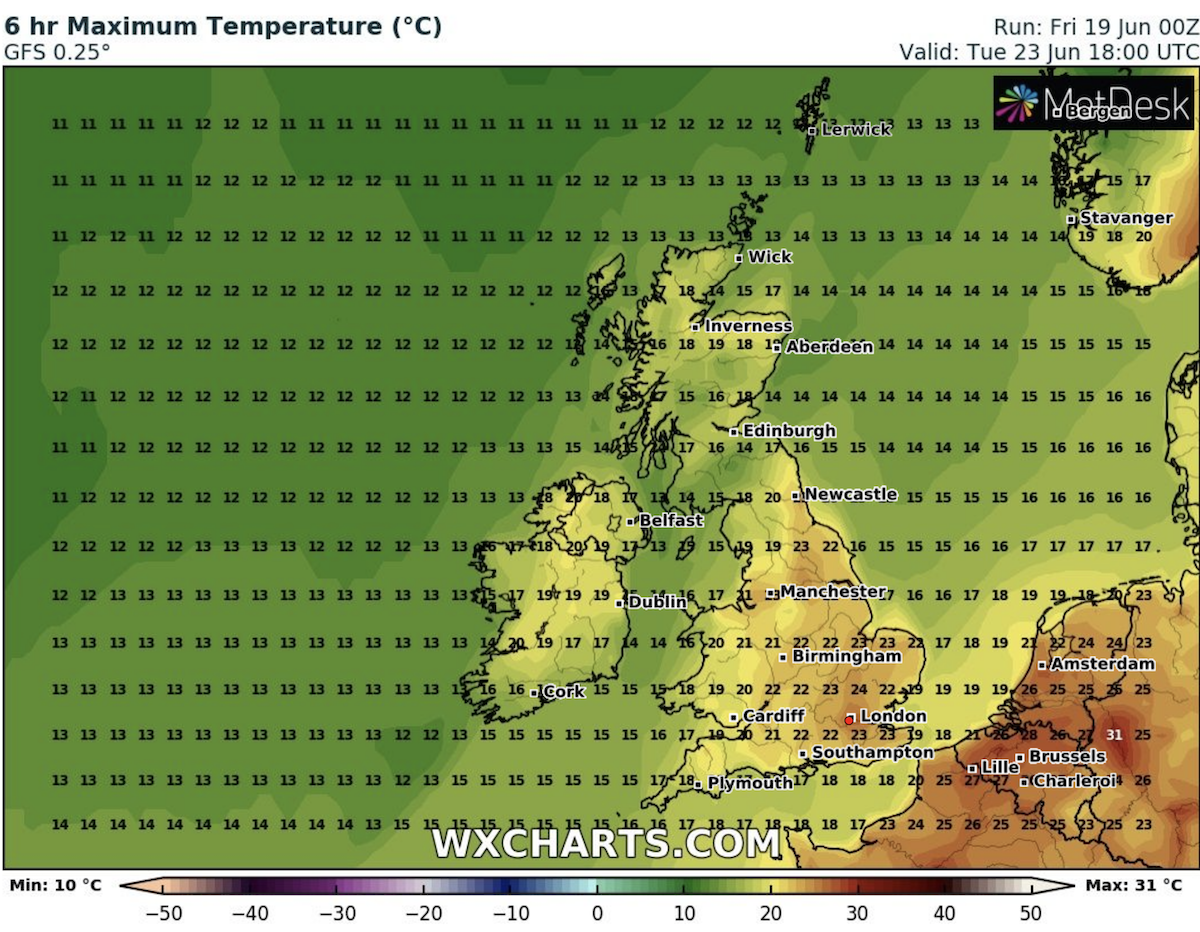 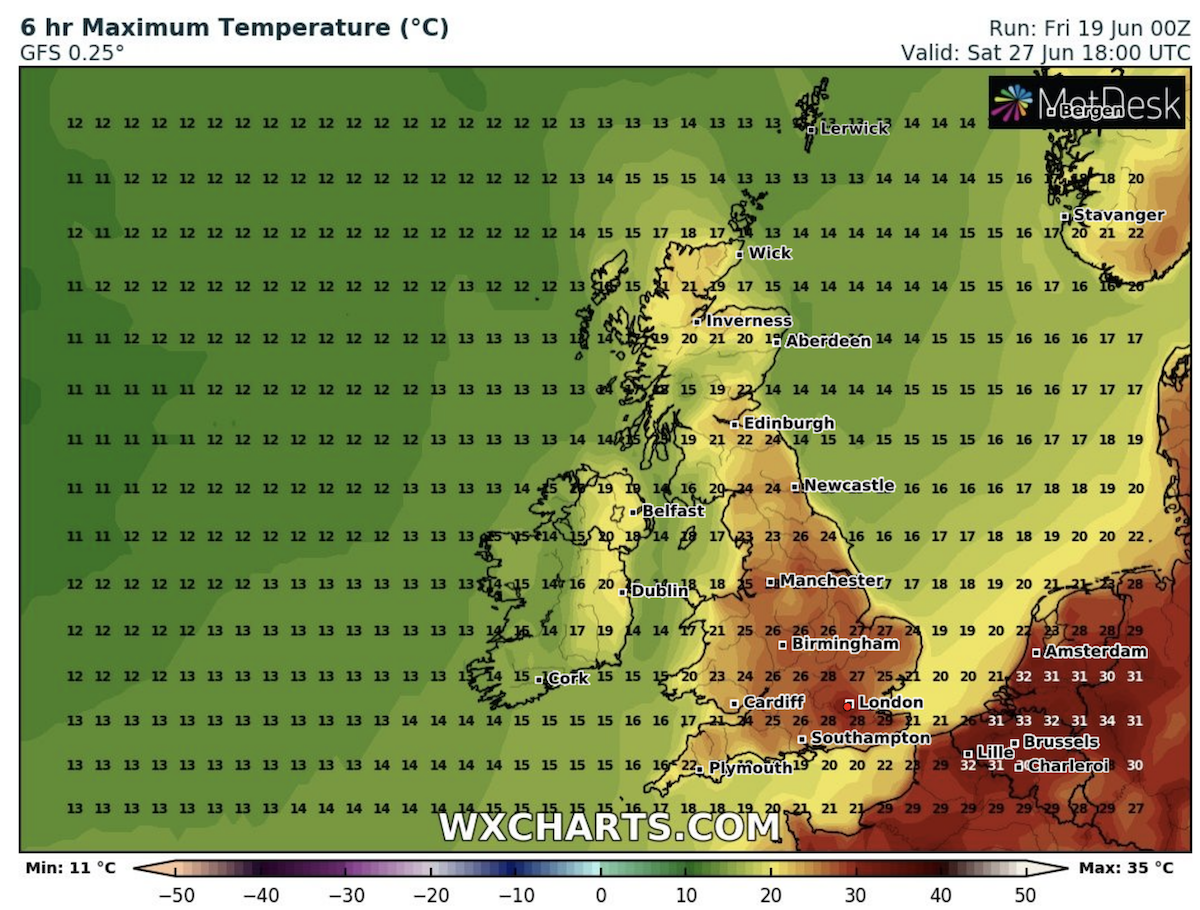 Met Office weather forecasters have also predicted a brighter weekend edged with showers in some parts.

They said Saturday would feel warm in much of the UK, with wet and windy conditions later on in the day.

By Sunday, the country will be “mostly dry”, with “frequent showers” to the northwest.

By Tuesday, forecasters expect the weather will transition and become “increasingly warm and sunny”. 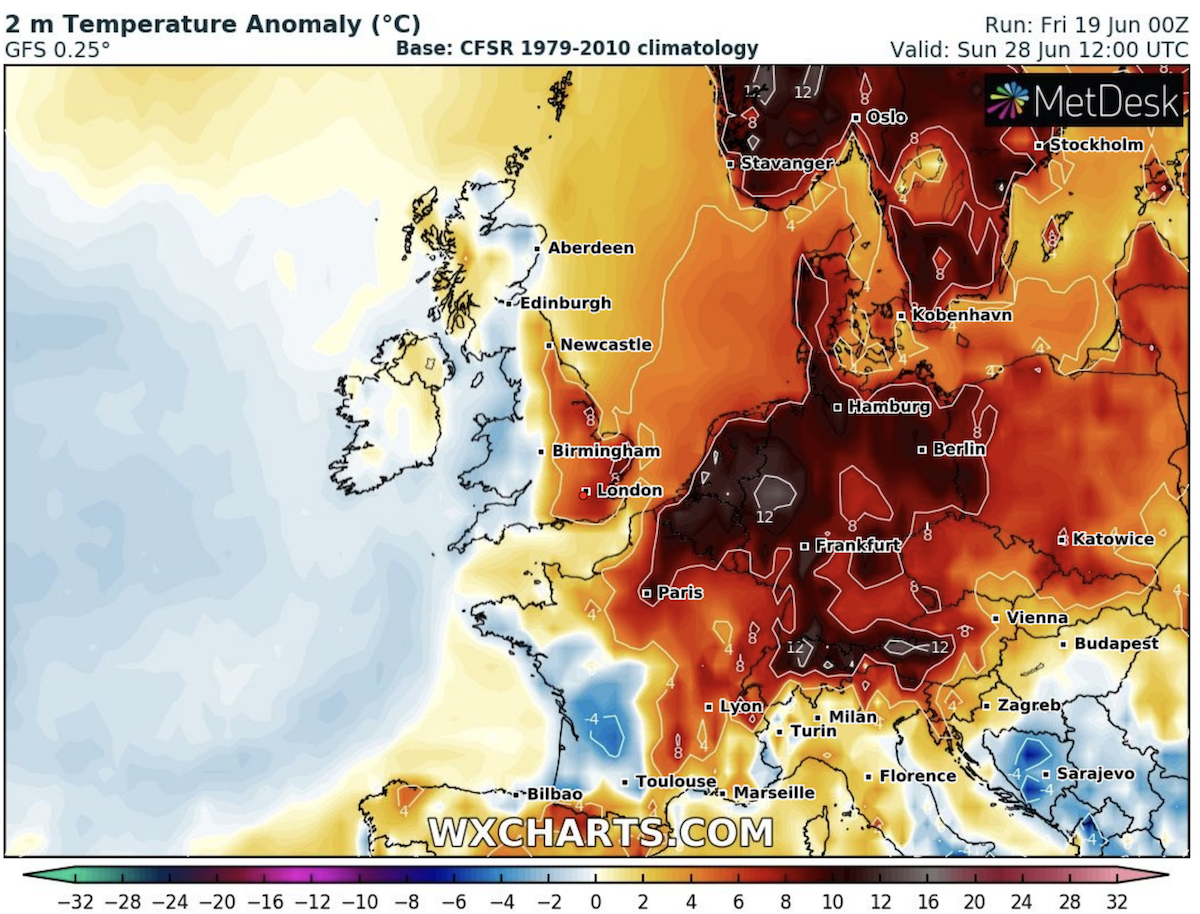 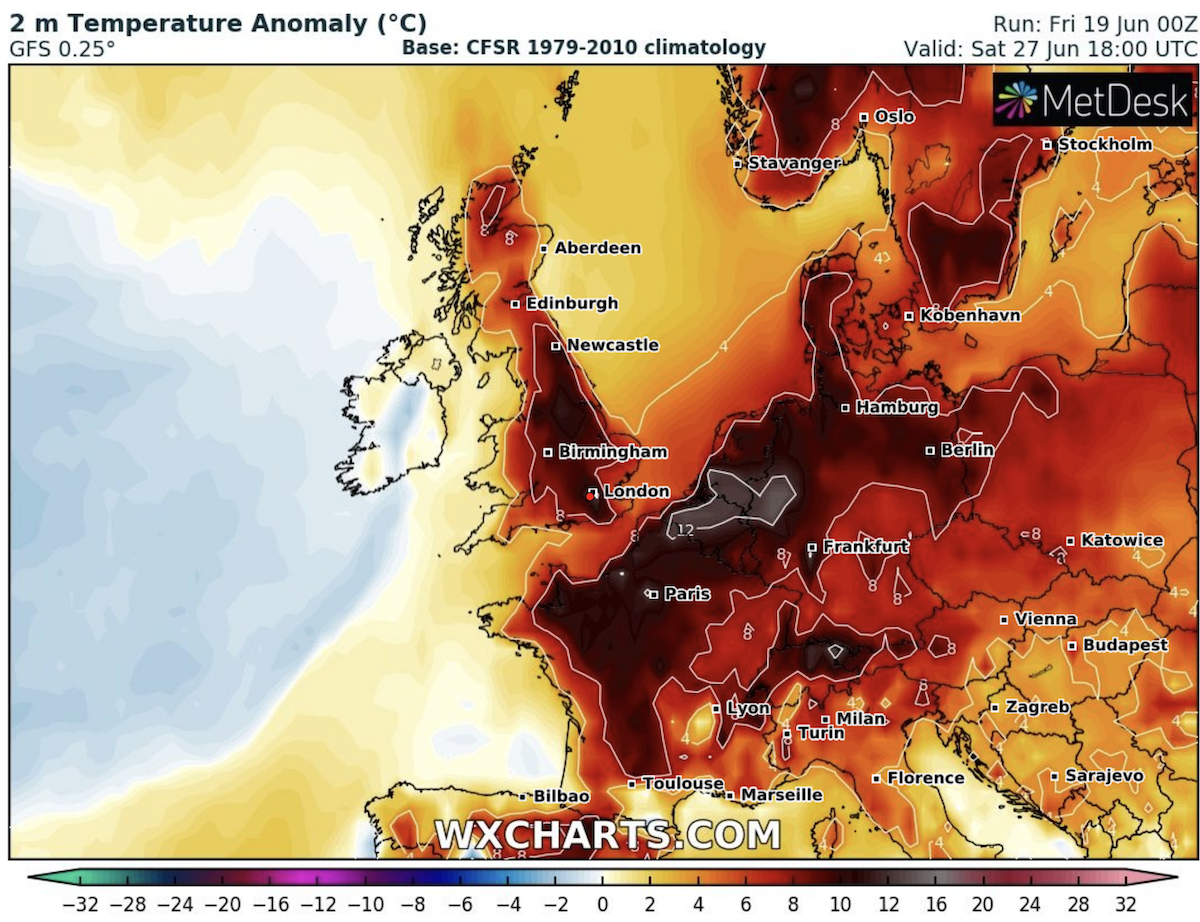 Speaking to Express.co.uk, Met Office meteorologist Oli Claydon said much of the warm weather would stick to the southeast of the country.

He added the country would see a change from the unsettled chaos of this week towards higher temperatures.

However, by next weekend they may start to decline once more.

According to the Met Office long-range forecast, which covers June 23 to July 2, states it could become “very warm” in some places.

Weather charts show streaks of red descending over the UK, indicating potential temperatures of 25C and over.

However, this will only come once the UK has left another “changeable” period.

The forecast reads: “It is likely to be a changeable start to this period, with showers or some longer spells of rain, particularly in northwestern areas where it may be windy at times.

“Eastern and southern areas should have the driest and brightest conditions.

“However, there are signs of a more settled and dry spell of weather becoming established for many parts towards the middle part of the period.

“However, the northwest may stay more changeable, whilst there is a risk of thunderstorms in some southern parts.

“More generally changeable and somewhat cooler conditions are likely to return again by the end of this period.

While the country looks forward to a brighter week ahead, some areas are under flood warnings.

The Environment Agency and Scottish Environmental Protection Agency have set a total of 12 warnings for the country today.

They are active in the following areas: