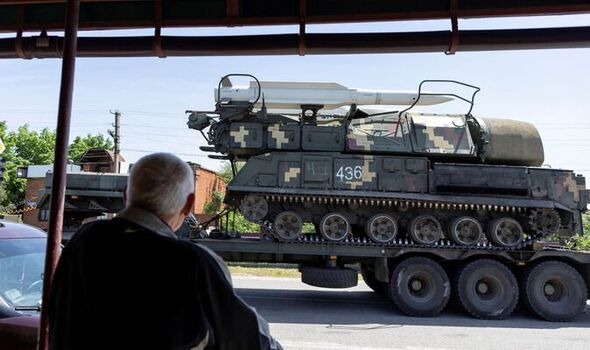 Despite warnings from Kremlin despot Putin just a day earlier of grave consequences if the West sent such weaponry, Boris Johnson said it was Britain’s duty to help. He tweeted: “We cannot stand by while Russian long-range artillery flattens cities and kills innocent civilians. The UK will gift the Ukrainian armed forces multiple-launch rocket systems so they can effectively repel the continuing Russian onslaught.”

The commitment came as President Volodymyr Zelensky ­visited the eastern towns of Lysychansk and Soledar, after earlier going to the south-eastern Zaporizhzhia region. He said: “I am proud of everybody I met, everyone I shook hands with.”

Three of the state-of-the-art missile systems will be sent from the UK, with the possibility of more later.

The US is also despatching a small number of its medium-range M142 High Mobility Artillery Rocket System (Himars), after being given the green light by President Joe Biden.

It came as Defence Secretary Ben Wallace yesterday said the UK was taking a ­lead in supplying Ukrainian troops with the “vital weapons they need to defend their country from unprovoked invasion”.

He added: “As Russia’s ­tactics change, so must our support to Ukraine.

“These highly capable multiple-launch rocket systems will enable our Ukrainian friends to better protect themselves against the brutal use of long-range artillery, which Putin’s forces have used indiscriminately to flatten cities.”

The Government said Ukraine’s troops would get training in the UK on how to use the launchers. The system can fire 12 missiles in a minute and strike ­targets within 50 miles with pinpoint accuracy – far ­further than the artillery Ukraine has now.

Explosions shook parts of Kyiv on Sunday in the first assault on the capital for weeks. Putin warned if long-range missiles arrived in Ukraine, he would “strike at those targets that we are not striking yet”.

Fierce fighting is raging in the eastern city of Severodonetsk.

Capturing it would deliver the Luhansk region to Russian forces.

China protests at support of U.S. and others for Taiwan at WHO