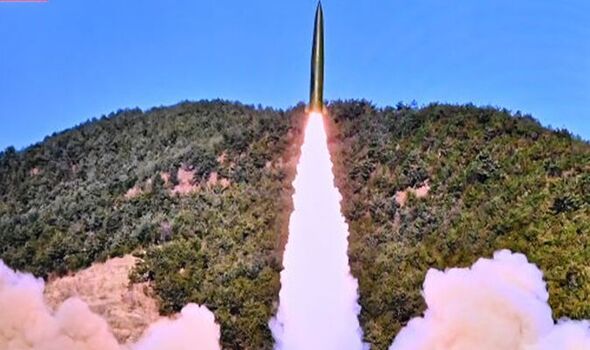 According to information given to the South Korean news outlet SBS, a missile that was fired from Pyongyang, the North Korean capital, on March 16. Intelligence officials said that fragments of the rocket had hit Pyonyang city university.

The high-ranking official added that the roof of the university building had been blown off, and had received intelligence that two people were dead as a result.

However, this information still needed to be verified, they said.

The official commented: “The missile fragments did not fall like hail on a private house, but major facilities in downtown Pyongyang were damaged.”

SBS reported that the Hwasong-17 rocket had exploded at the early stages of launch.

It added that the impact had created a large crater near the Kim Jong-il Political and Military University.

According to the LA Times, Lee Choon Geun, honorary research fellow at South Korea’s Science and Technology Policy Institute, said earlier this month he believed the missile likely exploded less than a minute after its launch.

He warned that if the toxic fuel from the missile had fallen on residential areas of Pyongyang, it may have major health implications.

The Hwasong-17 rocket, a two-stage inter-continental ballistic missile, was first unveiled in October 2020.

The Pentagon said that the first test launches of the new missile were carried out on February 26 and March 4 this year.

North Korean officials confirmed a successful maiden flight on March 24, however this account is contested due to inconsistent evidence.

According to state media, Kim Jong-Un, the North Korean dictator, remarked that the launch “would be an occasion of convincing the world of the modern feature of our strategic forces and further consolidating the foundation of guarantee and confidence in security of the state”.

He also is claimed to have said that the North Korean military “keep themselves fully ready for long-standing confrontation with the US imperialists”.