In 2013 Judy Rodgers, the 57-year-old chef of Zuni Café in San Francisco, yielded at last to the rare appendix cancer she’d struggled with for more than a year. The many published tributes to Ms. Rodgers celebrated the urgent beauty in her deceptively simple dishes: the way Zuni’s roast chicken, house-cured anchovies and Caesar salad were woven into memories of perfect meals.

Lost to memory — and missing from most obituaries — was the name of Zuni’s founder, Billy West, the man who had coaxed Ms. Rodgers into the kitchen in 1987 after years of trying. Though the cooking still owes a highly visible debt to Ms. Rodgers, Zuni’s pioneering queer activism is Mr. West’s forgotten legacy.

Mr. West opened Zuni in 1979 just blocks from City Hall, three months after an ex-cop assassinated the gay San Francisco supervisor Harvey Milk, in part to shatter a fragile L.G.B.T.Q. coalition’s policy gains. In a decade when queer advocates struggled for inclusion at City Hall, Zuni put queerness on display to San Francisco’s political class, who in the pre-Rodgers years flocked to the restaurant for guacamole, margaritas and swordfish cooked on a Weber grill in the alley out back. 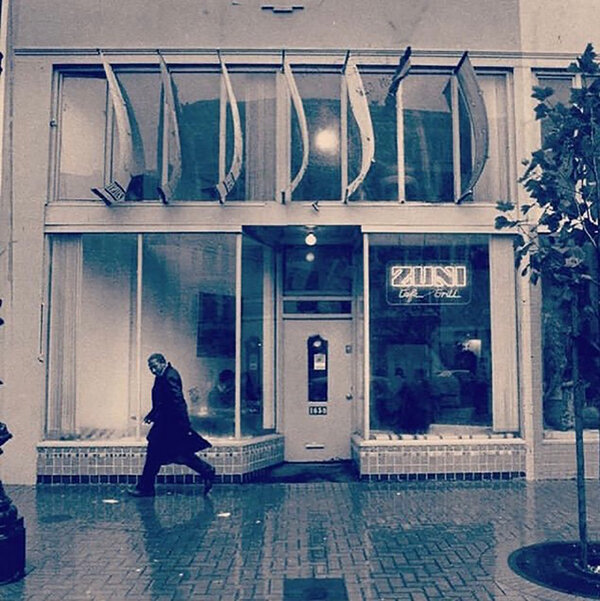 As Mr. West expanded Zuni into adjacent storefronts on Market Street throughout the 1980s, tables in the restaurant’s scattered dining spaces were a mix of politicians in suits, operagoers in tuxedos and gowns, and out gays and lesbians in T-shirts and jeans — all served by waiters with an uninhibited queer presence. Under Mr. West and his business partner, Vince Calcagno, Zuni would drive the movement for queer political and social integration in the context of the mainstream restaurant, at a time when the tragedy of AIDS was intensifying the stigma around being gay.

“Billy was a celebrity in the restaurant world and in the gay world,” said Gilbert Pilgram, Zuni’s current owner, who met Mr. West when Mr. Pilgram was a customer in the early days of the restaurant. “And that contributed a lot to the mystique of Zuni: an openly gay man being the owner of what was really a trendsetting restaurant.”

And yet Mr. West, at age 48, lost his own battle with AIDS quietly, at a bungalow in the Hollywood Hills, after a long struggle mounted in private. In 1994, Mr. West died of respiratory failure, a complication of AIDS.

Unlike Rodgers, Mr. West slipped away unnoticed by the food media. That’s due in part to the restaurant industry’s unwillingness to talk about H.I.V. and AIDS within its ranks in the 1980s and ’90s, the years before effective treatment, when gay men in food, including the chef Felipe Rojas-Lombardi and the cookbook author Richard Sax, died largely in silence, with no mention of their struggles with AIDS.

The only public narrative of Mr. West’s life is Ms. Rodgers’s paragraph-long tribute, which ignores both AIDS and even his passing, in “The Zuni Café Cookbook” of 2003. “Billy West opened Zuni Café in 1979,” she begins, “with a huge heart and exactly ten thousand dollars.” But that was already halfway into Mr. West’s story.

William McMaster West was born in Miami Beach in 1948, and grew up in Jacksonville, Fla., a place he wasn’t completely at ease in. “Billy always seemed a little more attuned to a broader, liberal landscape of the world,” said his brother Jim West. “He clearly needed to escape the confines of the South.”

In 1967, Mr. West’s escape route ran through Bard College in Annandale-on-Hudson, N.Y., only an afternoon’s train ride to Midtown Manhattan, where he studied Russian literature. He was a dark-eyed young man with hippie-long hair, handsome in a way that came across as soulful.

During a summer in Provincetown, Mass., Mr. West discovered the underground films of John Waters. Afterward, he phoned Mr. Waters in Baltimore to rent a 16-millimeter reel of “Mondo Trasho,” the filmmaker’s profane, tannic 1969 comedy, to show at Bard.

Mr. West partied through Provincetown summers with the louche, fabulous repertory of stars who staggered through Mr. Waters’s films, including Mink Stole and Divine (whom Mr. West called “Divvie”). Howard Gruber, who played President John F. Kennedy next to Divine’s Jackie in Mr. Waters’s gaggy staging of the Dallas shooting for the short “Eat Your Makeup,” became Mr. West’s mentor.

Mr. Gruber owned Front Street, a restaurant with culinary aspirations and a diverse cast of customers — a uniquely Provincetown mix of East Coast writerly types and ornate drag queens. Mr. West longed to open a similar place of his own — somewhere.

“Billy wanted to start a really cool restaurant that was for really all kinds of people,” Mr. Waters recalled. “Not just gay people, but the coolest of gay people and straight people hanging out together.”

In 1978, Mr. West settled in San Francisco, where in a dull storefront on a blank stretch of Market Street, he would realize his dream, an almost restaurant.

What to Cook This Week

Sam Sifton has menu suggestions for the week. There are thousands of ideas for what to cook waiting for you on New York Times Cooking.