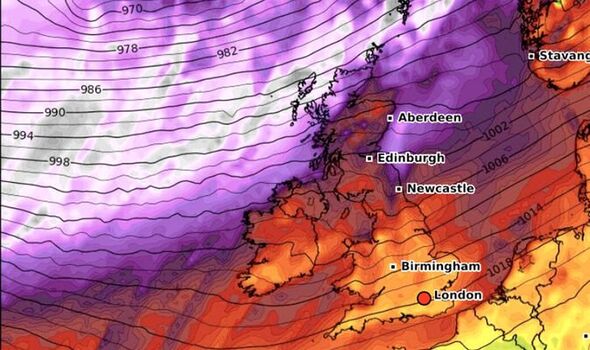 A ‘conveyor belt’ of storms responsible for the worst hammering in years is cranking up for yet another assault tomorrow and Thursday. Torrential rain will hit as rising river levels prompt government officials to issue ‘danger to life’ and rare ‘act now’ flood warnings. Storm Gladys, if named, would follow Storm Dudley, Storm Eunice and Storm Franklin which over the past seven days have subjected the UK to an unrelenting horror ride. The churning vortex will drag a plume of Arctic air across Britain bringing sub-zero temperatures and up to a foot of snow.

Forecasters warn it is ‘one to watch’ and say foul weather could hold out until the start of next week when finally, things may settle.

Jim Dale, meteorologist for British Weather Services, said: “Gladys could well be waiting in the wings this week.

“Although it is up to the Met Office to name these storms, a system arriving later this week will bring some further very strong winds to parts and this has the potential to warrant another storm name.

“Scotland and northern England will be in the firing line more so than the south of the country.

“This is another one to watch”.

James Madden, forecaster for Exacta Weather, said: “A potent wintry blast threatens to hit parts of Britain before the end of the week.

“There will be the risk of accumulating snow in parts.”

Gladys, as yet unannounced by the Met Office, would be the seventh named storm of the 2021/22 season and the fourth to strike in little over a week.

Atlantic cyclones are being dragged in by the jet stream, supercharged by a freakishly strong ‘jet streak’ core firing at 200mph.

The Met Office has issued further yellow warnings for severe weather through the coming days including alerts for snow and high winds.

Scotland is in the firing line where up to a foot of snow driven by 70pmh gusts threatens blizzards, travel mayhem and power outages.

A Met Office spokesman said: “Temperatures across Scotland are expected to drop sharply following a squally band of rain on Wednesday, with frequent heavy and blustery snow showers arriving from the Atlantic.

“Some places could see 20 to 30 cm building up by Thursday morning.

“The showers will be accompanied by strong, blustery winds, with gusts of 50 to 60 mph possible, and a small chance of 70 mph on coasts.

Met Office chief meteorologist Andy Page added: “A strong jet stream is driving weather systems across the North Atlantic Ocean with a succession of weather fronts moving into the UK bringing more wet and windy weather at times this week.”

“A weather front moves south and east through Tuesday petering out as it does so.

“Showers will, once again, move into the north and west on Wednesday bringing more wind and a band of heavy rain which could fall as snow or sleet over the hills, but also to lower levels at times.

“Gusty winds and heavy rain continue to move south and east across the country on Thursday, clearing the Southeast of England by lunchtime.

“Wintry showers are expected mainly over the hills in the north again, but there could be some snow to low levels at times.”

Meteorologists have sounded the alarm for a particularly savage storm season this year urging authorities to be more proactive in preparing for danger.

Mr Dale, author of Weather or Not? said local authorities, schools and government officials should prioritise warning for the dangers of severe weather.

He said: “We need to be more aware of these weather events and their impacts before they arrive so we can not only deal with them when they come but be better prepared for the next one.

“This is about educating people about how to be safe and making it clear not to carry out dangerous activities like swimming in coastal waters during storms.

“We have seen the damage the weather can do over the past week with Storm Eunice, and we should treat the weather with far more importance than sometimes we do.”

A spokesman said: “River levels are rising as a result of persistent heavy rainfall.

“Our incident response staff are liaising with emergency services and checking defences.

“Please move possessions and valuables off the ground or to safety and turn off gas, electricity and water.”