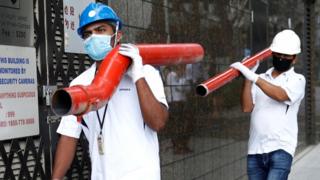 Singapore has told 20,000 foreign workers to stay in their dormitories for 14 days as coronavirus cases increase in the city state.

They are typically home to men who work in construction from South Asia.

The workers will be paid and given three meals a day – but some have complained of overcrowded and dirty conditions.

What has the government announced?

Two places are being sealed off – the S11 Dormitory at Punggol and the smaller Westlite Toh Guan dormitory.

The government said cases in the dormitories were rising, and that isolation would “keep the workers safe [and] protect the wider community from widespread transmission”.

Workers are banned from leaving their blocks, and have been told not to mix with people who don’t live in their room or floor.

The number of people in a room varies between dormitories, but in 2015 the BBC visited a new complex which had 12 people per room.

The workers will get their salaries, and their employers are entitled to claim S$100 a day (£57, $67) to cover their wages.

They will get three meals a day, plus masks, hand sanitisers, and thermometers. Temperatures must be recorded twice a day and there will be “on site medical support”.

But six workers in the Punggol dormitory told the Straits Times their centre already had cockroaches, overflowing toilets, and queues for food.

Foreign worker dormitories are privately-run but must be licensed if they have more than 1,000 occupants. There are around 40 such places in Singapore.

What is the virus situation in Singapore?

Singapore has recorded more than 1,300 cases and six deaths.

Although most cases were initially imported, local transmission is rising and on Sunday, 120 new cases were confirmed – the highest daily rise so far.

On Friday, the government announced a so-called “circuit breaker” policy, similar to the “lockdowns” seen in other countries.

Schools and non-essential businesses are set to close this week, and people have been encouraged to stay at home.

How many foreign workers are there in Singapore?

Of the foreign workers, 284,000 are there under “construction work permits”.

Employers can apply for construction permits for workers from 12 places, including India, Bangladesh, Sri Lanka, and Thailand.

As the virus consumes the U.S. government’s elite, Trump presides over a capital in chaos.