BALTIMORE — In July of 1999, Cindy Wolf cooked lunch for Julia Child at Charleston, her restaurant on the city’s downtown waterfront. At the end of a five-course meal that included fried oysters with cayenne-lemon mayonnaise and pan-seared sweetbreads, Ms. Wolf went out to the dining room to meet the cooking legend.

“Why haven’t I heard of you?” Child asked.

Ms. Wolf’s obscurity was understandable. She was then just 33, and Charleston was less than two years old, tucked away in an underdeveloped part of a city that had virtually no reputation for fine dining. “I love living in Baltimore,” Ms. Wolf said. “But let’s be honest — food people don’t think this is a sexy place to visit.”

No one has done more to change that perception than Ms. Wolf and Tony Foreman, her business partner and former husband. They own six restaurants in Baltimore, with another, the Milton Inn, due to open in a suburb later this year. The executive chefs at all of her restaurants have cooked at Charleston, and she mentored all of them from a young age.

Still, Ms. Wolf has never made the transition that so many of her peers have, from the stove to a corporate figurehead who delegates the cooking.

She cooks in Charleston’s kitchen nearly every night, as she has since the restaurant opened 24 years ago. Her decades-long mission to refine her blend of French and Southern cuisine has earned her nine nominations for the James Beard award for Best Chef: Mid-Atlantic, a record for a chef (tied with Peter Pastan) in a category they have not won. “Just give it to her already,” Tom Sietsema, the Washington Post food critic, wrote in 2017, after she received her sixth nomination. 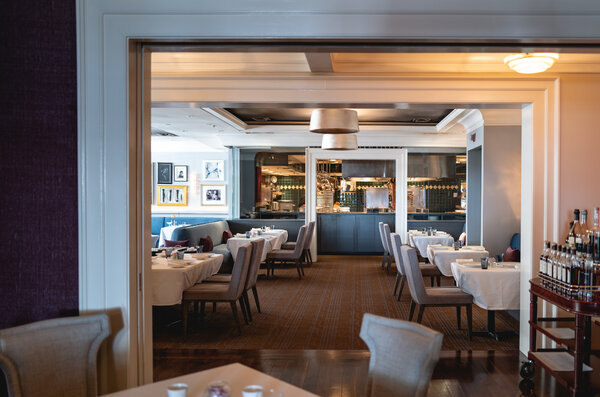 Charleston is among the relatively few still-thriving restaurants from the 1990s that helped spur the explosion of innovative New Southern cooking in the 2000s.

But after a turbulent year that has brought into question what the future will look like for restaurants catering to affluent diners, Charleston, with its Bernardaud china, cheese cart, tasting menu and long-cellared wines, feels like a throwback to a fading era.

Something similar can be said of Ms. Wolf. At 56, she is the rare chef-owner of her skill level and accomplishment who is mainly focused on her flagship, on traditional fine dining and on the daily task of cooking — something she insists will never change.

“When Tony told me he wanted to open more and more restaurants, we agreed that I would not leave Charleston,” Ms. Wolf said during one of several recent conversations in Baltimore. “Every restaurant since then really has been his dream, because I’m quite happy with this one.”

Three of the Foreman Wolf company’s restaurants are within walking distance of Charleston: Bar Vasquez, an Argentine tapas bar and steakhouse; Cinghiale, an Italian restaurant; and Cindy Lou’s Fish House, a Southern seafood restaurant that opened in October. The other two, Petit Louis Bistro and Johnny’s, a casual seafood place, are in the Roland Park neighborhood. (Mr. Foreman, who is responsible for the wine programs at all the restaurants, owns two wine shops separately from Ms. Wolf.)

The two partners don’t own the real estate for any of their businesses. As revenues shrank during the pandemic, the lease arrangements, particularly in the booming areas around Charleston, in Harbor East, made them uneasy. They decided to buy the Milton Inn, a restaurant in an 18th-century building 20 miles north of Baltimore, to give them more control over their financial future. Chris Scanga, the executive chef at Petit Louis, will be chef of the inn, as well as a business partner, the first such arrangement for Ms. Wolf and Mr. Foreman.

“It’s our first shot at a real sort of succession plan,” said Mr. Foreman, 55, who has had three heart surgeries. “Given my particular health history, you spend a lot of time planning for when you die.”

Ms. Wolf has had her own health crises: two struggles with cancer in Charleston’s first decade. She and Mr. Foreman, who is in charge of operations at all the restaurants, divorced in 2010 but decided to remain in business together.

“Tony is very good at what he does. And he cares about everything as much as I do,” Ms. Wolf said. “I was not about to give up everything I’d worked this hard for to achieve.”

It was a Thursday afternoon in early April, and both were at Charleston, preparing for a staff meeting. They interact like close siblings running a family business, and co-host a local public radio show about food and wine. “We don’t fight on air too much,” Mr. Foreman said.

The restaurant was filled with sunlight, and so quiet you could hear the patter of Leobardo Aguillar, a longtime prep cook, as he poured lobster shells into an empty pot across the dining room. He was making stock for curry-scented lobster bisque, Charleston’s best seller, beneath a row of hanging copper pots.

“Those were Cindy’s surprise gift, from the day we opened,” Mr. Foreman said.

The partners were upbeat over a recent turn toward normalcy in Baltimore. Restaurants were limited to seating at 50 percent capacity indoors (they are now at 100 percent), but pedestrians filled the waterfront walkways in front of Charleston, many heading to the Orioles’ home opener at Camden Yards, across the Inner Harbor. Some 215 employees were back to full-time work at Foreman Wolf restaurants, down from 340 before the pandemic, though Mr. Foreman said they had enough business to hire 50 more.

Charleston, which reopened for indoor service permanently in August, was fully booked through the weekend. (Among those dining that night was John Waters, whose films have celebrated the counterculture of his native Baltimore.) And in recent weeks, Ms. Wolf had noticed a change in her customers’ behavior.

“Now that people have got the vaccine, the weight has really been lifted,” she said. “There is laughter.”

Ms. Wolf and Mr. Foreman are aware of their position as high-end restaurateurs in a city beset by poverty and racial inequities. Ms. Wolf talks proudly of nurturing the careers of Everardo Florentino, Charleston’s chef de cuisine, and Mario Cano Catalán, the executive chef at Bar Vasquez, both Mexican immigrants first hired as teenagers.

The partners describe the unrest after Freddie Gray died in custody of the Baltimore police in 2015 as a transformative experience, for themselves and the city. Of the Black Lives Matter signs posted at all of their restaurants, Mr. Foreman said, “Cindy and I both think the same about that: Let’s just tell them how we feel.”

Emily Weinstein has menu suggestions for the week. There are thousands of ideas for what to cook waiting for you on New York Times Cooking.

A fiery plane crash, a near drowning – I escaped death seven times