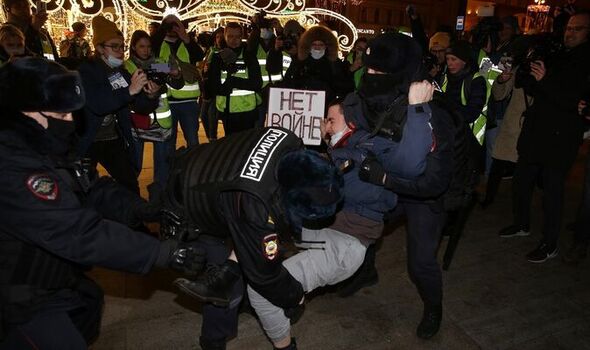 Urging a nationwide show of defiance Mr Navalny took to social media to write: “The crazed maniac Putin will be most quickly stopped by the people of Russia, if they speak out against the war.” Twitter accounts run by the incarcerated politician’s allies called for protests in central squares of Moscow and St. Petersburg on Sunday afternoon.

It acknowledged that protesters would likely be arrested and that surveys by state-backed pollsters indicate a majority of Russians support the war. But he predicted that support for the war would crumble as the death toll becomes clearer and as Western sanctions send Russia into a deep economic crisis.

Nearly 14,000 people have been detained at protests in Russia since the invasion of Ukraine began on Feb 24, according to independent protest monitor OVD-Info.

It comes as Liz Truss vowed to “tighten the screw” on Moscow after the UK slapped sanctions on hundreds of Russian parliamentarians over the invasion of Ukraine.

The Foreign Secretary said the 386 MPs who supported Vladimir Putin’s actions have been hit with a UK travel ban and a freeze on any UK assets.

It is the latest in a wave of sanctions unveiled by the Government, with Ms Truss saying Britain “will not let up the pressure” on Putin and his supporters.

The Duma is the lower house of the Russian parliament and at the end of February it ratified treaties which recognised the independence of the breakaway Luhansk and Donetsk regions in Ukraine.

The treaties also authorised the permanent presence of Russian forces in the regions in a move which was viewed as paving the way for the eventual invasion.

The latest announcement means 400 out of the Duma’s 450 members are now subject to British sanctions.

Ms Truss said: “We’re targeting those complicit in Putin’s illegal invasion of Ukraine and those who support this barbaric war.

“We will not let up the pressure and will continue to tighten the screw on the Russian economy through sanctions.

“Together with our allies, we stand firmly beside our Ukrainian friends.

“We will continue to support Ukraine with humanitarian aid, defensive weapons and diplomatic work to isolate Russia internationally.”

The announcement comes after the Government unveiled a new crackdown on key oligarchs – including Roman Abramovich.

The Foreign Office said the UK has now sanctioned more than 500 high-value individuals, entities and subsidiaries since the invasion started two weeks ago.

That brings the total now covered by the UK’s sanctions list to more than 800.

A total of 18 oligarchs, with a combined value of more than £30billion, have been hit with travel bans and asset freezes by the UK.

Technology minister Chris Philp said he was “very confident” Roman Abramovich and other sanctioned Russian oligarchs will not be able to successfully challenge the measures.

He told Times Radio: “I’m very confident that these sanctioned individuals would not be able to successfully challenge these measures legally, we’ve been very careful to make sure this is totally legally watertight.”