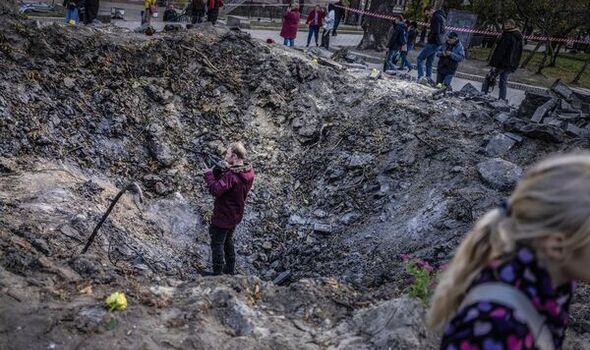 Several cities and provinces have indeed been forced to introduce rolling blackouts, and the prospect of freezing in one’s home remains a realistic threat as winter looms.

Here in Kyiv, where since April people have been returning to restart their lives, the early morning strikes felt like a sucker punch – one that leaves you angry, uncertain and struggling to catch your breath.

“This wasn’t supposed to happen,” I could read in the eyes of nervous passers-by as I went out to survey the damage.

Spring was filled with defiance, as the capital had withstood a brutal siege. Summer turned almost giddy, as people again began to fill the streets, optimistic of further victories in the south and east.

But Monday’s attack has knocked a big dent in public confidence.

One missile had crashed into the base of a giant footbridge that my youngest daughter and I meander across on Saturdays, making our way from one beautiful park to the next, the sparkling Dnipro river winding below.

I meet an elderly neighbour wandering around the corridor with a candle looking for someone familiar to talk to in the darkness.

Her refrigerator is Soviet-made and she’s worried her food will spoil, she tells me.

But the next day my landlord, a hearty septuagenarian who served on a Soviet submarine in his youth, arrives with a portable heater in case the heat is cut off this winter.