The former journalist is accused of passing military secrets to an unnamed NATO power. 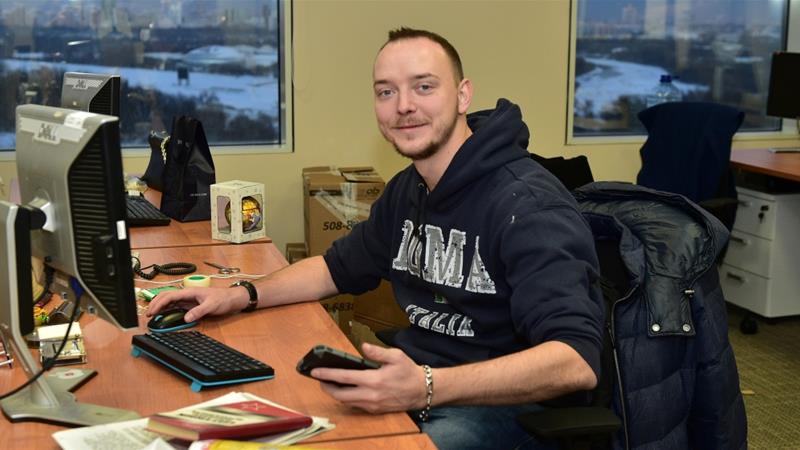 Russian security forces have arrested a former journalist who works as an aide to the head of Russia’s space agency on treason charges, accusing him of passing military secrets to an unnamed NATO power.

Footage released by the FSB security service on Tuesday showed Ivan Safronov being arrested outside his Moscow flat by armed plain-clothes agents who searched him before putting him into a van.

Safronov, who has covered military affairs for two national newspapers, faces up to 20 years in jail if found guilty.

His trial is expected to be held behind closed doors because of its sensitive nature.

Roscosmos, Russia’s space agency, said the case against Safronov was not linked to his work as a media adviser to Dmitry Rogozin, the agency’s director-general. Safronov started work there in May.

Rogozin told the TASS news agency Safronov did not have access to secret information.

“Safronov, carrying out tasks for one of the NATO countries’ intelligence services, gathered and handed over to its representative state secrets and information about military-technical cooperation and about the defence and security of the Russian Federation,” the FSB said in a statement.

Lawyer Oleg Eliseyev said Safronov was at the FSB’s detention facility, but he had not yet been given any access to his client.

Safronov previously worked as a journalist for the daily newspapers Kommersant and Vedomosti, and former colleagues took to social media to decry his detention.

Remarks from the Kremlin

Kremlin spokesman Dmitry Peskov said he did not believe the charges against Safronov were related to his previous work as a journalist, which he praised.

“But, unfortunately, such accusations have been made. We know that our counter-intelligence service has a lot of work, many concerns, and they are doing a very good job,” said Peskov.

The Russian online news portal the Bell said at the time that an article which Safronov had worked on had subsequently disappeared from Kommersant’s site.

The article, which remains unavailable, said Egypt had signed a deal with Russia to buy more than 20 Sukhoi SU-35 fighter jets.

US Secretary of State Mike Pompeo subsequently threatened Egypt with sanctions if it went ahead with the purchase.

Safronov said he was forced to quit Kommersant last year after the newspaper’s publishing house took issue with an article which suggested that the chairwoman of the upper house of parliament might leave her post.