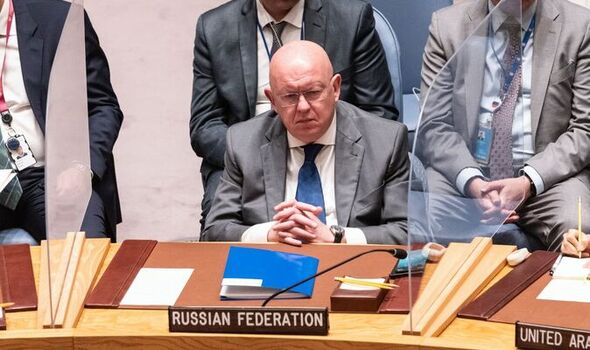 The Nuclear Non-Proliferation Treaty, which is reviewed by its 191 signatories every five years, including the UK, aims to prevent the spread of nuclear weapons. But, over the weekend there was dismay as Russia objected to a draft text. It cited “grave concern” over military activities around Ukraine’s nuclear plants, in particular the complex at Zaporizhzhia – the biggest in Europe.

Both Ukraine and Russia blame each other for shelling around the plant, which experts have warned risks creating a catastrophe not seen by the world since the Chernobyl disaster of the 1980s.

There was further bombing in the area yesterday with Ukraine saying it was Russian shelling and Moscow declining to comment.

It had been hoped that the nuclear disarmament review joint declaration would be signed by all nations in New York at the weekend.

But The West reacted with dismay when Russia refused to sign.

Australian Foreign Minister Penny Wong said she was “deeply disappointed” at the lack of agreement.

She added: “Russia obstructed progress by refusing to compromise on proposed text accepted by all other states.”

The US representative, ambassador Bonnie Jenkins, said the US “deeply regrets this outcome, and even more so on Russia’s actions that led us here today”.

The treaty commits countries which signed up – including the US, Russia, France the UK and China – to reducing their stockpiles and bars others from acquiring nuclear weapons.

The UN’s nuclear watchdog is expected to organise a trip to the Zaporizhzhia plant in the coming days to inspect facilities there.

Orca in Napier shallows: ‘The fin shaking is him ripping the prey apart’