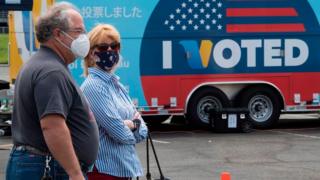 A Republican candidate has won a congressional seat from the Democrats in liberal California for the first time in more than two decades.

Republicans lost the House of Representatives seat by nearly double digits in the 2018 midterm elections.

The election was held to fill Democrat Katie Hill’s seat after she resigned last year in a sex scandal.

There are still ballots left to be counted, but as of Wednesday afternoon local time, Mr Garcia led with 56% of the vote to Ms Smith’s 44%.

It is the first time the Republican party has won a Democratic-held seat in the state since 1998.

In a statement, Ms Smith, a state assemblywoman, offered congratulations to Mr Garcia, saying the current tally showed him as the likely victor.

They will face off again during this November’s general election, to compete for a full two-year term in the seat, as Ms Smith noted in her concession.

“This is only one step in this process, and I look forward to having a vigorous debate about the issues in the upcoming November 2020 election,” she said.

“There is no doubt in my mind that together, we will prevail in the fall general election.”

The party was driven out of its former political fortress of Orange County in the so-called blue wave election of two years ago.

The 25th congressional district, which includes northern Los Angeles County and parts of Ventura County in southern California, went to Katie Hill over an incumbent Republican by around a nine point margin in 2018.

Ms Hill vacated the seat last October – days after she was placed under investigation by the House Ethics Committee over the alleged affair with a Capitol Hill aide, which she has denied.

Democrat Hillary Clinton won the suburban district in the 2016 presidential race by a nearly seven-point margin.

She, along with former President Barack Obama and Senator Elizabeth Warren, had endorsed Ms Smith.

Big Congressional win in California for Mike Garcia, taking back a seat from the Democrats. This is the first time in many years that a California Dem seat has flipped back to a Republican. Also, Tom Tiffany beat his Democrat rival BIG in Wisconsin. Two great Congressional WINS!

A harbinger or a blip?

We won’t know which category the Republican victory in the Los Angeles area falls into until later this year, but for the moment it’s cause for Democratic concern.

The party has lost one of the “blue wave” seats it pried from the Republicans in 2018. Back then, Democrats nearly swept all of California’s congressional districts, making the state the backbone of their new majority in the House of Representatives.

If Republicans can win races like this in November – in districts that Hillary Clinton carried in 2016 – they have a realistic shot of taking back control of the House.

That this victory happened in the middle of the coronavirus pandemic, when the economy is crumbling and unease about the future is growing, should be another reason for liberal heartburn.

Democrats can comfort themselves with the thought this race had unique circumstances because the Democratic incumbent resigned amidst a sex scandal. But if they thought they had the wind at their back in the current political environment, this result suggests they may be mistaken.

Mr Garcia said he was “ready to go to work right away”. His term from this special election will last until January 2021.

The runoff election has also served as an initial test of the voting system amid the coronavirus pandemic.

Voters received mail-in ballots, but there were also a select number of in-person stations set up in the district, with social distancing measures in place.