Thousands of Roma across Europe left to fend for themselves on polluted lands, new study reveals. 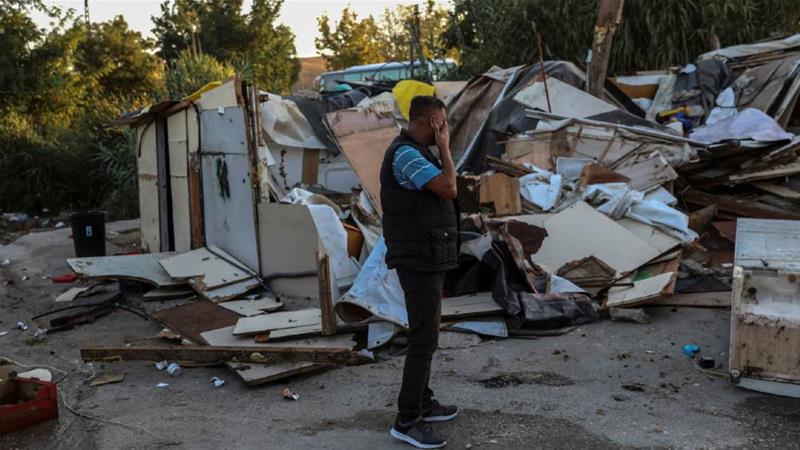 London, United Kingdom – Roma communities across Europe are often forced to live on polluted wastelands while deprived of essential utilities – such as clean running water – as a result of systemic “environmental racism”, a new report has concluded.

Released on Wednesday to coincide with International Roma Day, the European Environmental Bureau (EEB) study highlights the long-standing discrimination experienced by Roma people throughout the continent.

Many have endured forced evictions and are now left to fend for themselves in degraded areas near to landfills or contaminated industrial sites, the report says, with lack of access to clean drinking water or adequate sanitation systems found to be issues in more than half of the case studies examined.

One example cited by the report, named “Pushed to the wastelands” is Stolipinovo – Europe’s largest Roma settlement and part of the Bulgarian city of Plovdiv, a European capital of culture in 2019.

Many of the 60,000 people living in the district are cut off from the public water supply and from waste collection services.

Meanwhile, in the Hungarian town of Sajokaza, a wall built by local authorities in 2018 has separated about 300 Roma people from other non-Roma residents.

And in Jarovnice, a village in northeastern Slovakia, a Roma settlement is separated from a nearby majority-Slovak neighbourhood by a contaminated stream which serves as the former’s primary water supply. The contamination is caused by a local landfill.

‘Pushed to the wastelands’

Patrizia Heidegger, one of the report’s authors and the director of global policies and sustainability at the EEB, said the findings expose the largely overlooked, desperate conditions in which Roma people routinely find themselves living.

“In basically all of the countries we have covered, these are slums,” Heidegger told Al Jazeera, referring to Roma settlements.

She added the environmental problems faced by the Roma communities studied were compounded by “widespread and deep-rooted” prejudices held against them in many European societies.

“There’s all these stereotypes about Roma being dirty and not caring about where they live … or that Roma communities want to keep to themselves, and do not want to mingle with other people,” she said.

“But the fact is that, over centuries, or at least the last few decades, a lot of the communities we have studied have repeatedly been pushed to the wastelands and given no other choice than to live in dirty and polluted areas.”

One vivid example of that trend is Pata-Rat, a Roma settlement on the outskirts of Cluj-Napoca, a city in northwest Romania, and one of the country’s most important academic and cultural hubs.

There, some 2,000 Roma people live around a huge open-air dump in living conditions described as “inhuman” by Roma activist Ciprian Nodis, who has visited the site several times and was a researcher for the EEB study.

“Most of the people are living in improper housing – shelters built from materials they can find at the landfill, such as rotten wood, plastic or cardboard,” Nodis told Al Jazeera, adding many of the local residents had been forcibly evicted from homes in Cluj-Napoca and relocated to the site.

“Above all that, the air, water and soil pollution is extreme, and they don’t have access to electricity or drinkable water,” he said.

“The worst thing that can happen to you in Romania is to be born into a Roma family that lives in Pata-Rat – because you are born into dirt.”

Nodis identified four separate Roma communities living at the settlement, all with “different histories of discrimination”, but concluded the overriding sentiment felt among locals was one of being forgotten by state and European authorities.

“The people there feel abandoned – they say they are treated like the garbage they live next to,” he said.

Meanwhile, researchers identified several other Roma settlements also situated precariously close to hazardous sites in the region – including a former industrial site contaminated with mercury on the outskirts of the Romanian city of Turda, and a steel plant in the city of Kosice, in eastern Slovakia – leaving them acutely vulnerable to disease, accidents and depression.

While the report focuses on Central and Eastern Europe, its findings are indicative of Roma communities’ experience of “environmental racism” right across the continent, Heidegger said.

“We know there are similar situations in other countries, including in Sweden, Spain, Portugal, Italy, Germany, France, Ireland and the UK,” she said. “The problem definitely exists all over the place.”

An estimated 10-12 million Roma people live throughout Europe, according to the European Commission. Six million of them reside within EU member states, making them the bloc’s biggest minority group.

A collection of diverse groups including Roma, Gypsies, Travellers, Manouches, Ashkali, Sinti and Boyash, together the Roma form one of the continent’s most disadvantaged peoples.

Approximately 80 percent of them live below the poverty line in their country of residence, a 2016 survey of thousands of Roma people spread across nine EU member states found, while Roma life expectancy generally falls at least 10 years below the European average.

Combined, the bleak statistics and environmental hardships highlighted by the EEB report reflect a failure by authorities across the continent to integrate Roma communities into wider society, said Dr Pauline Lane, a sociologist at the UK-based Anglia Ruskin University and member of the European Academic Network on Romani Studies.

“The problem is that Europe talks about inclusion in the discourse, but in reality, it doesn’t put the mechanisms in place to make it happen,” Lane told Al Jazeera.

The European Commission called in 2011 for EU member states to produce concrete plans for improving the situation of marginalised Roma groups across education, employment, healthcare and housing. But little actual progress has been made, Lane argued, with most countries failing on both policy and monitoring fronts.

“Not only is the right thing not being done, but in fact, the opposite is happening and the EU is turning a blind eye to very blatant discrimination,” she said.

“In a land where other people get so much space to speak, the Romas are so vilified.”

In a statement, European Commission Vice President Vera Jourova and Commissioner for Equality Helena Dalli noted that online hate speech and fake stories about Roma people “are again on the rise” and acknowledged “we need to do better”.

“This is why the Commission will present a reinforced strategy for Roma equality and inclusion in European society,” they pledged.

“In these times, greater efforts must be put into ensuring that Roma people are included in society and that they have equal access to the basic needs, thus ensuring their protection against [coronavirus] infection.”

Acknowledging the troubling status quo, Nodis meanwhile emphasised the importance of projects such as the EEB report in helping Roma communities expose the discrimination they face.

“If they don’t have the capacity to speak about their problems, they will be seen to be part of the problem, which is not true,” he said.

“The voice of Roma is the most important – the issues that we are facing we know best, and we should have our voice in Europe.”