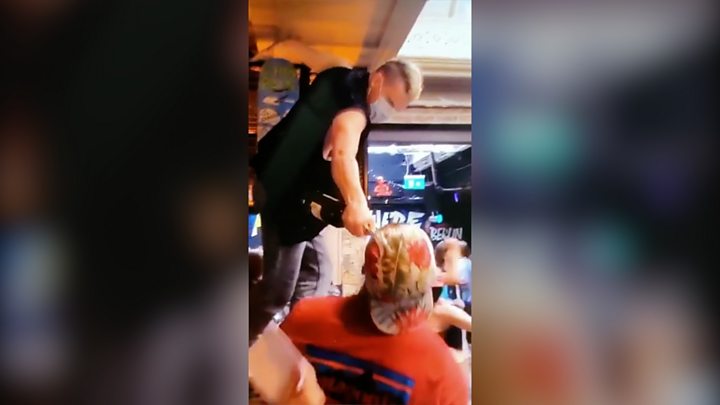 Ireland’s health minister has condemned “reckless scenes” at a venue in Dublin which appeared to breach social distancing regulations.

Footage from Berlin D2 on Saturday showed a man standing on the bar pouring drinks into people’s mouths.

Guidelines say people must sit at tables in such venues unless they are paying, leaving or going to the toilet.

Jay Bourke, a restaurateur who is involved with the venue, told RTÉ he was “not happy” with what had happened

He added: “They’ve shown huge solidarity. People are rightly sickened by these scenes.

“The reckless actions of a small few can have huge repercussions on everyone else.”

The person who took the video told RTÉ that when he arrived at the venue with his wife, some social distancing measures were being applied.

He said tables were being kept 2m apart and food was being served to the tables.

However, he said people stopped following the measures at a certain point, and the music was turned up.

But he said having reviewed the CCTV from the venue he believed the footage did not fully reflect what happened.

Mr Bourke said footage from inside the premises showed that for the majority of the time people were complying with public health guidelines.

He said 51 people had attended a brunch event, which was fully ticketed.

He said Berlin D2 was operating at less than 20% capacity at the time, was “spotlessly clean” and that food was served, temperature checks and details for contact tracing were taken on arrival and social distancing was maintained.

However he said Berlin D2 would stay closed until an internal investigation into the incident is completed.

Restaurants Association of Ireland CEO Adrian Cummins described the scenes as “deplorable and despicable” and a “slap in the face to front-line workers who are putting their life on the line during this pandemic”.

Mr Donnelly’s predecessor as health minister, Simon Harris, said the video was a “kick in the gut” and a “middle finger” to everyone who had suffered during the coronavirus pandemic.

“To everyone who has lost a loved one or been sick with Covid-19, to every frontline worker and to every responsible business owner who have suffered so much. Shameful,” he wrote.

It comes as the number of cases in the Republic of Ireland has risen in recent days.

On Saturday, the state reported 200 new confirmed cases of coronavirus, which was the largest daily increase since May.

The Irish Acting Chief Medical Officer Dr Ronan Glynn said the situation was “deeply concerning” and that there were “multiple clusters” across the country, as well “secondary spread” of the disease.

On Sunday, Taoiseach Micheál Martin echoed these concerns, and said the government would “continue to monitor the situation closely”.

Student, 20, placed in coma after horror car crash breaks arms, legs and back

Falklands warning: China and Russia ‘could push UK and Argentina into fresh dispute’