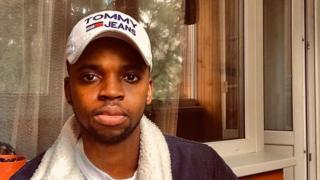 The Black Lives Matter (BLM) protests have not swept across Russia the way they have elsewhere, but people of colour living there have told the BBC about the casual discrimination they experience on a daily basis.

There are estimated to be tens of thousands of people of colour living in Russia – including Russian-born people with mixed heritage and people from African and Caribbean countries who are working or studying in Russia.

Here are some of their stories.

Recently a video of a taxi driver refusing to take a black man in his cab made waves on the internet in Russia.

The person left standing on the kerb was 21-year-old Roy Ibonga, a Congolese man studying economics at Bryansk State University.

In his video, published on social media, the driver can be heard saying “If I don’t like a person, I won’t give them a ride. It’s my car”. When Roy asks him bluntly “Are you a racist?” the driver replies, “Yes, of course.”

Later the Yandex taxi company, the Russian equivalent of Uber, apologised to Roy.

“Thank you for finding a way to tell us about this intolerable behaviour. I’m very sorry that it happened to you,” wrote a customer service rep.

According to news reports, the driver was dismissed the same day. The company said “rude or racist drivers have no place at Yandex Taxi”.

Roy wrote about the incident on Instagram. Some people expressed support, but others wrote racist insults. Later Roy closed his account. Some social media users criticised Yandex for firing the taxi driver and even called for a boycott.

‘Once they wouldn’t let me into a cafe’

Roy lives in Bryansk, a city 380km (236 miles) south of Moscow, where he is not the only African student, but all of them, he says, experience similar racist treatment.

“That incident with the taxi – it happens a lot. I just decided to video it this time to show people. It’s the same every time. It happens to my friends too, but they can’t talk about it because they don’t speak Russian.

“Once last year they wouldn’t let me into a cafe. The security guard told me, ‘You can’t come in because last time some African guys came in there was a fight’. What has that got to do with me? I asked. But he wouldn’t let me in. I even called the manager, but they just told me I wasn’t allowed in.

“Maybe it’s because there aren’t many of us and we haven’t been here long, so people just aren’t used to us. There’s a big difference between Bryansk and Moscow. Moscow is like a different country. I never felt discrimination there.”

He said he had “never seen police beat up a black person in Russia” and “I’ve never had anything to do with the police here”.

“If people are racist towards me, I just walk away. There’s no point being aggressive. People won’t understand anyway and they won’t change. I try to ignore it. It just makes you stressed. You start to think, ‘Why was I born black?’

“I was born in Congo and lived all my life there. I only encountered racism when I came to Russia in 2017. I find it very hurtful. You step outside and everyone looks at you as if you’re not human. It’s really offensive.”

“I live in Moscow, but went to university in St Petersburg and I was born in Yuzhno-Sakhalinsk [in the Russian Far East].”

Isabel says she was treated meanly by other kids at school and reminded every single day that her skin colour was different.

“It was very hard to put up with every day, even though I went to one of the best schools in town, specialising in maths and physics. I couldn’t stand up for myself there. I didn’t tell my parents about it. My big brother protected me at school. Sometimes he had to get into fights for me.”

Isabel dreamt about moving from Yuzhno-Sakhalinsk to a place where she would be able to walk down the street without people looking at her. Both she and her Dominican dad were routinely stared at.

“When I moved to St Petersburg everything was so much better, I began to forget that I look different. But later, when I started work and needed to rent a flat, I felt the racism again.”

It was particularly bad in Moscow, says Isabel. All the letting ads said “Slavs only”.

“When landlords heard my name on the phone, even though I had a permit to live in Moscow, they didn’t believe I could pay the rent. I had to arrange to meet them in person, so they could see I was a normal person with a normal job and wouldn’t turn their apartment into a drug den.

“Whenever I meet new people, as soon as they relax the jokes start. I either ignore them or join in the banter, if I can see that it’s just teasing. If you get angry every time it’ll make you a nervous wreck.”

‘Enemy of the people’

Isabel’s mother is from Sakhalin island and her dad from the Dominican Republic. They met in the 1980s, studying in Kyiv, the capital of then-Soviet Ukraine.

Isabel’s father came over to the Soviet Union on a student exchange programme. Isabel says that when her parents got married, while still studying, the university’s reaction was negative. Her mother was harassed and called an “enemy of the people”.

“At university they started giving her bad grades, although she had always been top of the class. The day after giving birth to my brother she had an exam. The university refused to let her postpone it. She wasn’t allowed to defend her dissertation properly. She always got top marks, but they wouldn’t give her anything higher than a third-class degree.

“These days people who are educated and travel know that the world is full of variety, but most people here don’t and they’re not interested. Racism shows itself in Russia in attitudes towards people from the former Soviet republics. They are the ones who need to protest, but they are afraid to because a lot of them are here illegally.”

“I have experienced casual racism in Moscow. Sometimes people look suspiciously or with disapproval and move to another seat if you sit down next to them in the metro. But I haven’t noticed any serious racial hatred. Not as an adult.

“I did encounter racism at primary and middle school. I think it left a mark on me. I lived on the outskirts of Moscow. It wasn’t just the kids, but their parents who were bringing them up to be racist.

“When my mum came to a parents’ evening and complained that the other children were offending me, they told her, ‘it’s your fault for giving birth to him’. Later I went to a better school. The kids and especially the parents there were much more aware and open-minded.

“It really upset me when I was a kid and I often didn’t want to go to school. Now it doesn’t bother me so much, but there are still moments.

“Once, at the journalism faculty at university I held a door open for a girl and someone behind me said, ‘Oh! The journalism faculty has a black doorman!’ Things like that make me angry but generally much less than they used to. I’ve learnt to have a positive attitude to myself and think my appearance is an advantage.

“It’s the casual racism that’s a problem in Russia and it comes from ignorance. I don’t think we have the institutionalised racism of the West.”

“I have been following the protests in the USA right from the start. I’m shocked by the brutality against people of colour there. Racism is a problem in Russia, too, but here everything is hushed up.”

Kamilla is of Russian and Nigerian origin. She grew up in Stary Oskol, a town 600km south of Moscow. There weren’t many other people of colour around.

“You could count the number of black people there on the fingers of one hand. I was lucky because my class was quite tolerant and we all knew each other from nursery school. But kids in other classes called me names. That was racist for sure and they insulted me.”

“I came to Moscow to play for the team when I was 12 and the racism was not so bad there. I still get impolite questions like, ‘So are you from Africa, or something?’ Some people don’t realise these comments are offensive. I usually give a sarcastic reply or just ignore them.

“The basketball clubs are already used to having black girls on their teams, so there’s less racism around. But when you play for a Russian team there are always comments on social media pages: Is she really Russian? Has there been a mix-up? People think it’s funny when a black girl plays for Russia.”

“It upset me so much when I was a kid, I took it so much to heart. But now I shrug it off. Why do they call me names? The answer is simple: it’s not me that’s wrong, it’s the people around me.”

Alena El-Hussein is of Russian and Sudanese origin, born in Moscow. Throughout her life she felt she looked different.

“It isn’t always offensive. It depends on the situation. Very occasionally I’ve been called chernaya – “a black” – but it was always by a very ignorant person. There have been clashes, but more often about my personality than the colour of my skin. There have certainly been times when people called me ‘chocolate’ and other things like that.”

Alena believes the problem of racism in Russia is different from the USA.

“Russian men and women identify themselves with white European colonisers. Ignorance of history misleads them into some delusion of superiority.

“Racism here isn’t so much against black people as against people from the former Soviet republics.

“People from Central Asia are the target of serious racism. It’s interesting that there aren’t protests against it. Maybe Russian society hasn’t woken up to it yet.”

Trump-appointed postal chief to testify amid fears over US polls