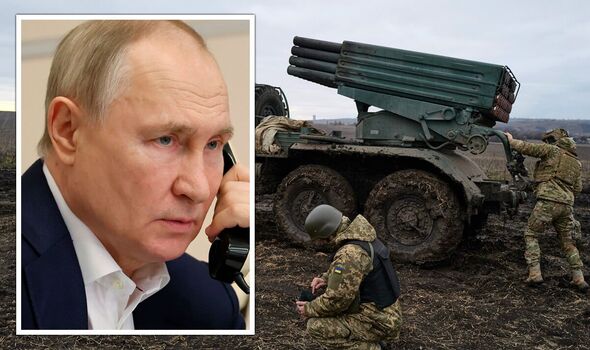 As the war in Ukraine enters a new calendar year, Russia could be preparing to create a second frontline of fighting in the north, launching a two-pronged attack on the capital of Kyiv and the eastern region of Donestk, Ukrainian officials have said. Andriy Chernyak, speaking on behalf of the Ukrainian MInistry of Defence, said they are “ready” for Russian forces to launch an attack “at the same time from the north and the east”. He anticipated that these offensives would take place in the next four to five months but that Russia would sustain heavy troop losses due to the preparedness of Ukraine.

Air defence systems in the city of Sevastopol in Crimea were set off last night, according to local officials, with Russia shooting down two Ukrainian, longer range drones.

Petro Andriushchenko, an advisor to the mayor of Mariupol, reported that air defences had been triggered twice in the early hours of Wednesday.

Later, the Russian-appointed “Governor of Sevastopol” Mykhailo Razvozhaev stated that “in the morning, the air defence system shot down two UAVs over the sea in the Belbek area”.

It is believed the attack happened close to the Belbeck airfield, which is home to military equipment.

Sevastopol is a vital port city for Russia, from which they launch their Black Sea fleet responsible for bombing critical energy infrastructure across Ukraine.

Russia “will try to continue offensive actions” in 2023, Ukrainian Ministry of Defence spokesman Andriy Chernyak has said, including a second attempt at capturing the capital of Kyiv in the north.

Ukrainian forces successfully repelled Russian forces from Kyiv during the first stage of the invasion in March last year, surprising Russian leader Vladimir Putin, who had believed his soldiers would storm the capital and beyond within a matter of days.

But Mr Chernyak suggested Russia will attack Kyiv again, echoing comments by the Commander-in-chief of the Armed Forces of Ukraine, Valerii Zaluzhnyi, who said Russia could launch a major offensive from the north as early as this month.

The frontline currently stretches 931 miles, according to Mr Zaluzhnyi, from the northeast below the city of Kharkiv down to the southwest, near the liberated port city of Kherson.

Mr Chernyak claimed in the next few months, the areas where Russia are expected to prioritise fighting is the land corridor to Crimea in the south, though they are not expected to try to cross the Dnipro river and retake Kherson, and the entire Donetsk region.

He said: “The Russians will try to continue offensive actions next year and in the future. In none of the directions did they succeed in achieving their goal.

“They understand that they will lose, but they do not plan to end the war. We are considering the possibility that they may leave at the same time from the north or the east. Such actions of the enemy are expected and our troops are ready for it.”

He added: “According to the estimates of military intelligence of Ukraine, in the next 4-5 months, the Russian army may lose up to 70 thousand people. And the leadership of the occupying country is ready for such losses.”

Good morning from London. I’m Tom Watling, I’ll be bringing you all the latest developments on the war in Ukraine. Please feel free to get in touch with me as I work if you have a story or tips to share! Your thoughts are always welcome.

Putin under pressure as key allies turn on Russian leader