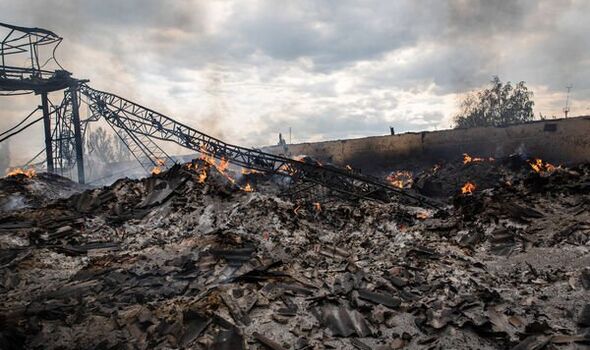 They believe the Kremlin’s aim is to encircle the cities of Sievierodonetsk and Lysychansk. If they fall, Moscow would control the entire Luhansk region.

Yesterday, Russian forces were bombing the main roads into the cities to cut off key supply routes.

Ukraine’s president Volodymyr Zelensky said: “All the remaining strength of the Russian army is now concentrated on this region…the occupiers want to destroy everything there.”

Luhansk governor Serhiy Haidai said the area was without gas and had limited water and electricity after the last gas supply station was hit.

He added: “The Russians are advancing in all directions at the same time. They brought over an insane number of fighters and equipment. The invaders are killing our cities.” He also warned that Luhansk was becoming “like Mariupol”.

The death toll in southern port city Mariupol rose on Tuesday as 200 bodies were found in the basement of bombed flats.

Meanwhile, Russian president Vladimir Putin signed a decree simplifying the process for residents of Ukraine’s occupied Kherson and Zaporizhzhia regions to get Russian citizenship and passports.