Democratic incumbent Edward Markey has been challenged by Joe Kennedy III to represent Massachusets in the US Senate. 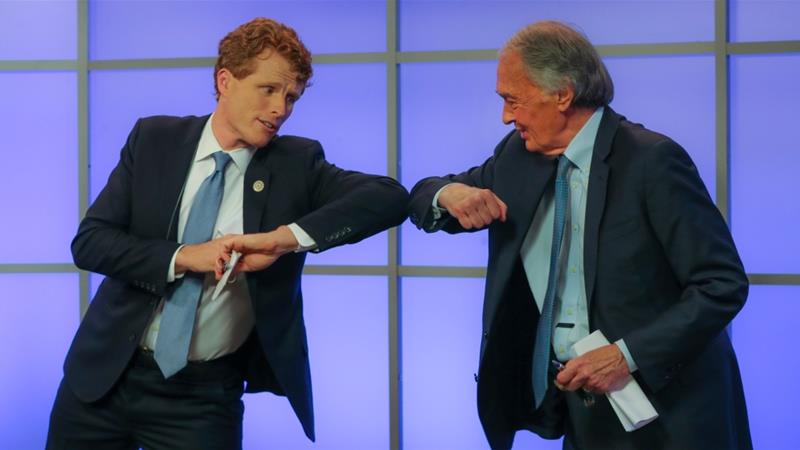 Massachusetts residents are set to decide between a longtime progressive senator and a Kennedy scion in one of the last primary votes of the election cycle.

Representative Joe Kennedy III, the 39-year-old grandson of Robert F Kennedy and great-nephew of former President John F Kennedy, is challenging 74-year-old senator Edward Markey, who has spent more than 40 years in Washington, to represent the state of Massachusetts in the chamber.

Few residents were expected at the polls on Tuesday, with state officials reporting that most ballots had already been cast in either early voting or mail-in ballots.

The winner of the primary is all but assured victory in the November 3 election in the deeply Democratic state.

Markey, a longtime progressive who co-authored, with Alexandria Ocasio-Cortes, the “Green New Deal” to lower carbon emissions causing climate change, has resonated with young voters, while garnering the endorsement of fellow progressives, including Ocasio-Cortez and Senator Elizabeth Warren, who competed against Joe Biden in the Democratic presidential primary.

The representative has also gone after Markey on the issue of racial inequity, criticising his initial opposition to school desegregation efforts in Boston in the 1970s and noting criticism of Markey by the father of Danroy “DJ” Henry, a young Black man from Massachusetts killed by police 10 years ago.

Kennedy has also highlighted his family’s political legacy, in part in response to Markey, who during one debate told Kennedy that he should tell his father, the former US Representative Joe Kennedy II, not to help fund a political action committee that was going after Markey.

Markey has also portrayed Kennedy as a “progressive in name only”, in one debate faulting him for deciding early in his career to work as a prosecutor for Michael O’Keefe, a Republican district attorney.

No matter who wins on Tuesday, the result will make history. It will be either the first time a sitting US senator or a Kennedy has lost a primary in the state, according to the FiveThirtyEight news site.