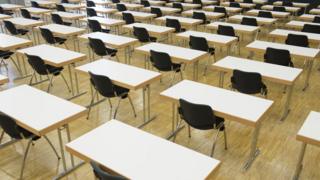 The Irish education minister has announced that this year’s rescheduled Leaving Cert exams will not go ahead as planned because of the pandemic.

The summer tests are the Republic of Ireland’s equivalent of A Levels.

The Leaving Cert exams had already been pushed back from the beginning of June to the end of July due to the virus.

But on Friday, Education Minister Joe McHugh said that instead, students will get “calculated” or predicted grades as most apply for third-level education.

He said students who are not happy with their score can appeal.

Mr McHugh also held out the possibility of a Leaving Cert exam at a later date for those who wanted it.

The minister said he took the decision with a heavy heart as there was compelling medical evidence that it was not possible to hold the exams in a reliable and valid manner that was equitable to students.

The decision was taken after a cabinet meeting on the day that unemployment reached more than 28% – the highest figure in the history of the state – because of the virus.

Factbox: Latest on the spread of the coronavirus around the world

Where can Canadian snowbirds go this year? A travel expert explores your options