Home » World News » Pope in Iraq: The pontiff’s symbolic visit amid the rubble came with a message of peace and hope

In a visit full of historic firsts, surely the most symbolic moment came this Sunday morning.

The Pope was in the rubble of an Iraqi city that came to define extremist intolerance; he was in Mosul with his message of peace.

In a clearing next to the city’s ruined Al Tahera church he prayed for the victims of war. 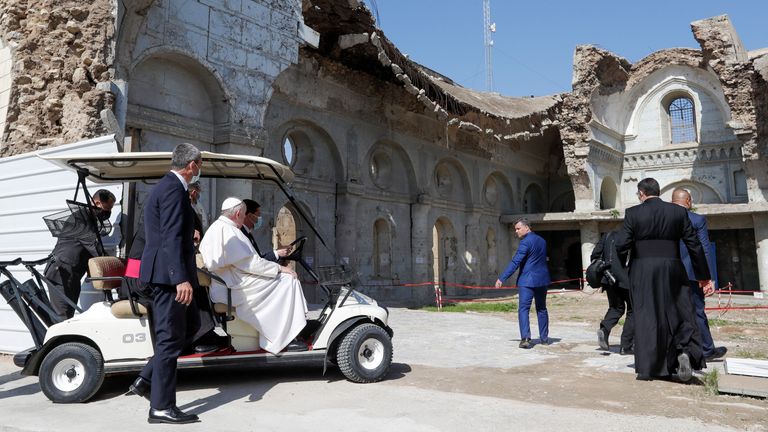 He sat in a white chair on a raised platform carpeted in red and surrounded by the grey concrete rubble of years of war.

Only a small number of people were permitted to sit in the congregation. Coronavirus and security risks are limiting his audiences throughout this trip.

But the imagery alone – broadcast globally – delivers his message of unity, tolerance and dialogue.

Just seven years ago, in this city, the leader of the so-called Islamic State, Abu Bakr al Baghdadi, clad in black, declared a caliphate that would stretch to Rome.

Mosul was occupied by ISIS, as the Islamic State is also known, for four years. It took a year of urban warfare of the type not seen since World War Two to liberate the city.

The legacy, in rubble, is all around.

After the short service of prayer the Pope was driven around a small secure part of the old city to see the destruction.

From Mosul he moved to the Christian village of Qaraqosh. To the southeast, it was also occupied by ISIS. At its height, the Islamic State held one third of Iraq. 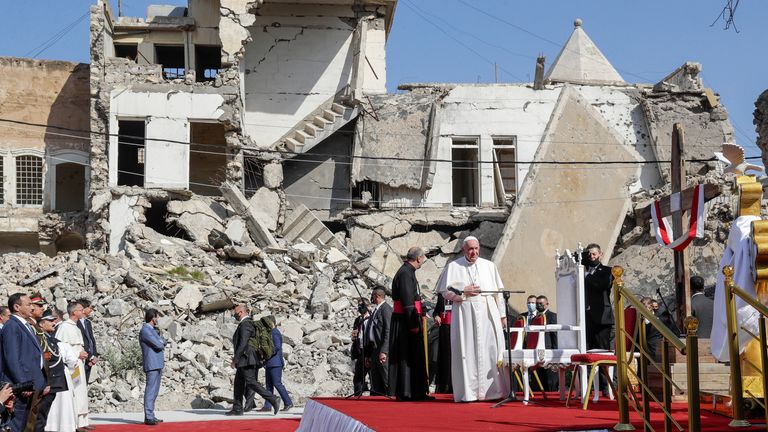 In the town I met Abu Walid and his family. They were trapped in their home when ISIS took their town.

For nearly three weeks he was beaten for not accepting their way of life. The family escaped but their trauma is still so painfully clear.

“I was scared for my daughter, God forbid anything happened to her,” Abu Walid told me.

“I thought they (ISIS) would take my sons from me; that my sons would end up like them. If I don’t accept (their way of life) they would put a bullet in my head.” He gestured with his hand.

“But God was with us and protected us. And people prayed for us.”

His wife Um was sobbing next to him.

“Can you imagine we had a psychological breakdown from the fear. You’re sitting in your house; you cannot leave or go anywhere. You can’t make a sound or switch on your lights. It was like living in a crypt underground from the fear,” Abu Walid adds. 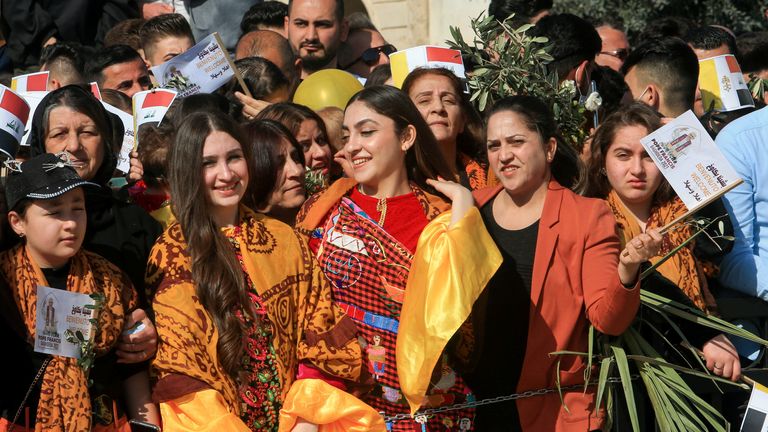 “It’s like you were dead and buried. You are in a grave. Your body is dead but you’re still breathing.”

Two of their three children were sitting with them. Their daughter was born with learning difficulties, and they tell me all three children now have psychological trauma.

It was clear from our chat that they are all deeply scarred. But they did live, and they have now returned to their Christian town. The hope is that tolerance and peace will allow more to do the same.

The sense I got is that the visit of Pope Francis will bring them some strength. For all the jeopardy of his visit, it means so much to people like Abu Walid.

Dick Brass: How us Americans have already flunked the biggest stress test of our lives