A family in India were nearly killed in a house fire last week. Thankfully, their three-year-old dog, Bravo, alerted the man and his pregnant wife to the blaze by banging on the bedroom door. Bravo’s quick actions meant that all made it out of the fire unharmed.

Shesh Sarangdhar, 38, who runs an IT company, told Hindustan Times: “I was irritated by Bravo’s constant barking and pounding at our bedroom door. When I opened to see what was wrong, I found the entire house was filled with smoke.

“There was so much smoke that I could not see anything. I started dousing the fire with some buckets of water.

“It was a narrow escape for us because if Bravo had not raised an alarm in the nick of time, the smoke would have crept into our rooms as well and hurt us in our sleep.” 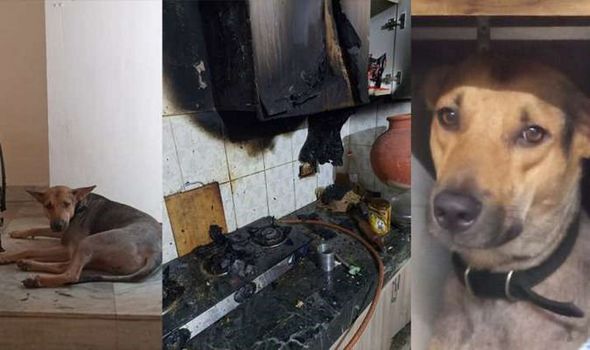 The smoke was coming from their kitchen downstairs after their stove caught fire. It was later discovered that Mr Sarangdhar’s wife had left the stove with a pan full of oil on before falling asleep and forgetting about it.

Before the couple adopted Bravo in March, he was homeless and living on the streets in Mr Sarangdhar’s old neighbourhood. He used to feed the street dogs and when the couple decided to move, they adopted four of them.

Mr Saragdhar continued: “When we take a nap during the day, all four dogs like to snooze on the terrace. When the incident happened, only Bravo was awake and indoors.”

Bravo’s heroic actions have amazed people around the world. One woman said: “What a heart touching incident.”

Another said: “In our society we often look down upon street dogs but this heartfelt story shows how sensible and alert they are. This story has struck a chord with all animal lovers.”

COMMENTARY: Before we defund the police, maybe we should check their call lists