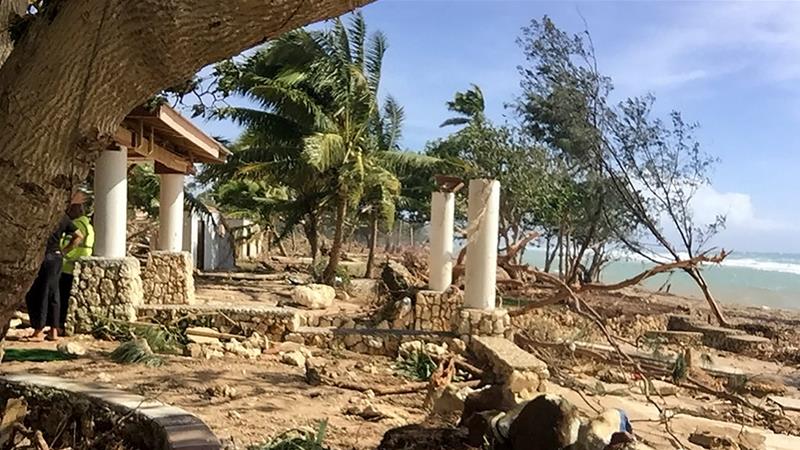 The cyclone gathered pace as it bore down on the tiny island kingdom on Thursday, which declared a state of emergency and warned residents to seek shelter from destructive winds and massive sea surges.

By early morning it had again become a scale-topping Category 5 superstorm – surprising meteorologists after signs earlier in the week that its intensity was dropping.

Packing winds of up to 260 kilometres per hour (160 miles per hour), it cut power in parts of Tonga and police said at least three tourist resorts north of the capital, Nukualofa, had been reduced to rubble.

The cyclone killed 27 people in the Solomons late last week before barrelling southeast to directly hit Vanuatu as a Category 5, obliterating entire towns in the northern provinces.

There have been no reports of deaths so far in Vanuatu, Fiji or Tonga, with emergency workers saying residents in the hardest-hit areas took shelter early.

“It appears that many buildings and crops have been destroyed and some people in the most-affected areas have lost everything,” Red Cross Vanuatu Secretary-General Jacqueline de Gaillande said.

Harold weakened slightly to a still-formidable Category 4 as it lashed Fiji on Wednesday but hopes the storm was dissipating were dashed as it regathered momentum heading towards Tonga.

“It’s been a tricky one to predict,” meteorologist Bill Singh from New Zealand’s Metservice said. “We knew the track it was going to take but initially everyone thought it was just going to be Cat 3 or 4. But as it progressed over open warm waters it deepened.”

Video: NASA IMERG Animation of Heavy Rainfall from Tropical Cyclone #Harold
This animation shows the heavy precipitation associated with Tropical Cyclone Harold as it progresses from the Solomon Islands… https://t.co/ificc4Fj2B

The storm is expected to head away from Tonga onto the open ocean late on Thursday, but weather forecaster Philip Duncan said there were no certainties.

“It’s almost unheard of to see a cyclone tracking south away from the equator, weakening, then suddenly returning back to Cat 5 so far south,” he said.

The COVID-19 pandemic has complicated disaster relief efforts, with Vanuatu reluctant to open its international borders as it seeks to remain one of the few countries without any confirmed coronavirus cases.

“No foreign personnel are being brought to Vanuatu for response efforts at the present time, this will be an internally run operation,” Vanuatu’s National Disaster Management Office said.

Fiji has 15 virus cases and Prime Minister Frank Bainimarama said it and cyclone meant “our economy and our people have been dealt two body blows to start the year”.

“This storm must not compromise our coronavirus containment efforts, lest we risk damage far more painful than the aftermath of any cyclone,” he said.

Australian Foreign Minister Marise Payne said an air force plane carrying essential supplies, such as tents and water containers, was on its way to Vanuatu, while assistance had also been offered to other affected nations.

“We are acutely conscious that this comes on top of the impact and difficulties created by COVID-19 for those countries,” said Payne.

Vanuatu said any supplies that came into the country would be handled with protective equipment, and air crews delivering them would be isolated in transit areas.

Elephant deaths: Mystery after hundreds of animals die in Botswana