Ukraine: Zaporizhzhia 'being used as a trump card' says engineer

The six-reactor Zaporizhzhia Nuclear Power Plant (ZNPP), which is the largest in Europe, has been operating in emergency mode ever since the power line connecting the plant to the Ukrainian electricity grid was cut on Monday.

While this left the plant without an outside source of electricity, it had been sourcing its power for its own safety systems from the last remaining reactor still intact.

But on Friday, the International Atomic Energy Agency warned that shelling in the nearby city of  Enerhodar where the plant is operated from, has caused a blackout and sent safety concerns soaring. 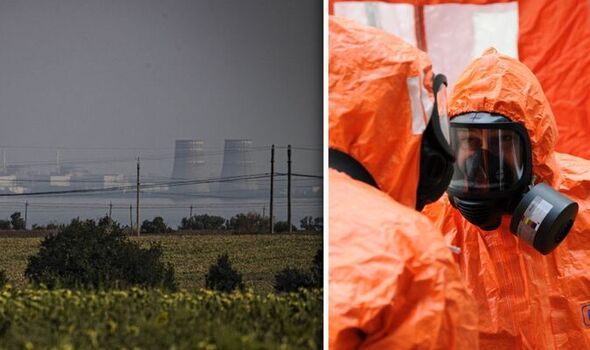 The IAEA chief Rafael Grossi called for the shelling at the plant to stop immediately, as well as shelling in the nearby city of Enerhodar. The Russian envoy to the IAEA also supported the appeal.

“I therefore urgently call for the immediate cessation of all shelling in the entire area.”

He added: “Only this will ensure the safety and security of operating staff and allow the durable restoration of power to Enerhodar and to the power plant.

Mr Grossi also said that the situation is “completely unacceptable” and that “it cannot stand”.

Mikhail Ulyanov said on Twitter: “We fully support the appeal and demand of the IAEA Director General that shelling of the town of Enerhodar and the ZNPP must stop immediately.”

The shelling reportedly destroyed power infrastructure in the city of Enerhodar, where the plant is operated from, as the threat to the site continues to grow.

The IAEA has now warned that there is a significant risk of an impact on the availability of essential staff to carry on safely operating the plant.

While coming under Russian control early on in President Vladimir Putin’s invasion of Ukraine, Ukrainian staff have still been operating the plant.

Both sides have blamed the shelling, which has hit the plant and surrounding areas repeatedly amid the conflict, on each other.

But its occupation by Russian forces continues to be a huge concern to the plant’s safety.

Petro Kotin, the head of Energoatom, Ukraine’s nuclear operator, said: “Only the withdrawal of the Russians from the plant and the creation of a security zone around it can normalize the situation at the Zaporizhzhia NPP. Only then will the world be able to exhale.”

While shelling has sparked concerns for the plant, Mr Kotin has previously said that it “can be stopped completely” at any moment, with the only power source left to back it up being a diesel generator.

Mr Kotin has also previously said that shelling at the site has ramped up the risk of nuclear and radiation safety. He said: “The situation (at the plant) is very bad now and it is worsening all the time. Over the last three weeks, there’s been an increase of shelling at the site. The actions from Russia increase the danger to nuclear and radiation safety onsite. Also, the conditions of our staff there are really decreasing.”

This also comes amid reports that the Ukrainian staff detained at the plant have been tortured by the Russian forces that are occupying it.

Mr Kotin said: “They [the Russians] captured about 1,100 personnel from the site, and they kept them in their facilities, the captured facilities and police facilities in the (nearby) town of Enerhodar.

“One person was killed, another person was heavily wounded. They’re trying to push on them to accept the Russian world. All kinds of psychological pushes on them.”

The IAEA has warned that there is a significant risk of an impact on the availability of essential staff to carry on safely operating the plant.