​​​​​​​North Korea has suspended a planned military retaliation against South Korea after weeks of rising tensions.

It did not specify why the decision was made but added other discussions included bolstering North Korea‘s “war deterrent”. Mr Kim’s decision came as a surprise as he had widely been expected to give the go-ahead to the military action during the meeting.

Last week, the North declared relations with the South were over, destroyed an inter-Korean liaison office meant for peace talks in its territory and threatened military action over Seoul’s lack of progress in bilateral co-operation.

It also hit out against activists floating anti-Kim leaflets across the border by putting up speakers pumping out anti-Seoul propaganda on the border.

Half of the 20 speakers were seen being removed on Wednesday, military sources told South Korea’s Yonhap News Agency.

Analysts say North Korea, after weeks of raising tensions, may be pulling away just enough to make room for South Korean concessions.

If Mr Kim does eventually carry out military action, artillery drills and other exercises by the demilitarised zone could take place, as well as sending boats deliberately across the disputed western maritime border between the Koreas. Any action is unlikely to go too far to prevent full-scale retaliation from South Korea and its US ally.

Yoh Sang-key, spokesman for South Korea’s unification ministry, said Seoul was “closely reviewing” the report from the North, but gave no further details.

He also said it was the first report of Mr Kim holding a video conferencing meeting, but did not say whether it was because of coronavirus – which the North claims it has not had one case of.

Kim Dong-yub, an analyst from Seoul’s Institute for Far Eastern Studies, said it is likely the North is waiting for further action from the South to salvage ties from what it sees as a position of strength. “What’s clear is that the North said [the military action] was postponed, not cancelled,” said Kim, a former South Korean military official who participated in inter-Korean military negotiations.

Other experts said the North will now ask for something major from the South, possibly a commitment to resume operations at a joint factory park in Kaesong, where the liaison office it blew up was, or to restart tours from the South at the North’s Diamond Mountain Resort .

Both steps are prohibited by international sanctions against North Korea over its nuclear weapons programme. 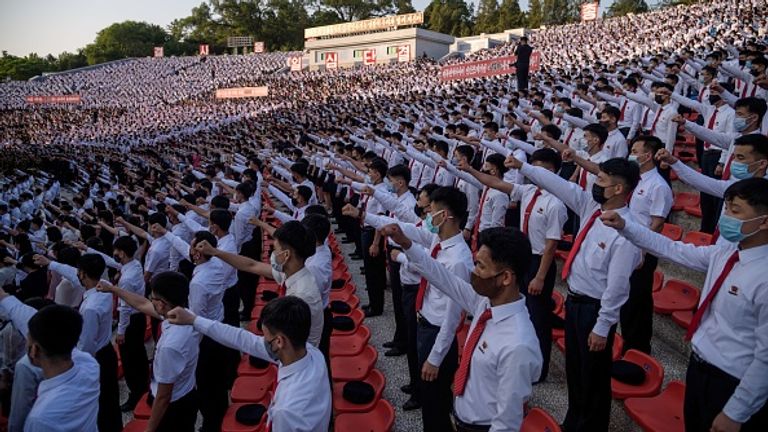 Leif-Eric Easley, a professor at Ewha University in Seoul, warned: “Now isn’t the time for anyone in Seoul or Washington to be self-congratulatory about deterring North Korea.

“There may be a pause in provocations or Pyongyang might temporarily de-escalate in search of external concessions.

“But North Korea will almost certainly continue to bolster its so-called ‘deterrent’.