WASHINGTON — The Trump administration is expected on Wednesday to announce a final rule to weaken federal authority to issue clean air and climate change rules by recalculating the costs of pollution to human health and safety — and the benefits of controlling that pollution.

The new rule is the latest in a flurry of final Trump-era policies from the Environmental Protection Agency, as President Trump’s political appointees seek to wrap up four years of rolling back or weakening more than 100 environmental rules and policies.

But the cost-benefit rule, which changes the way the E.P.A. shifts economic analyses of Clean Air Act regulations to limit future air pollution controls, is not expected to survive the incoming Biden administration, which could quickly reverse the rule.

“A Biden administration could just come in and propose a different rule,” said Steven J. Milloy, who serves as an informal environmental policy adviser to members of the Trump administration and is author of the book “Scare Pollution: Why and How to Fix the E.P.A.” “Ultimately these final Trump rules won’t really matter, other than that they’ll have some political rhetorical value for people like me.”

If Mr. Trump had won the presidential election, the rule could have had a profound effect on the federal government’s legal authority to weaken existing air pollution rules, while limiting its authority to put in place tight pollution controls in the future.

The Trump administration appears prepared to laud the rule as though it will have a lasting impact. Andrew Wheeler, the E.P.A. administrator, is scheduled to introduce it at a virtual event hosted by the Heritage Foundation, a conservative research organization, which billed Mr. Wheeler’s speech as a “major policy announcement.”

The rule would change the way the E.P.A. calculates the economic costs and benefits of new clean air and climate change rules by discounting the value of some public health benefits of such rules. That, in turn could have helped it defend such rollbacks in court and cement a Trump legacy of industry-friendly pollution controls. 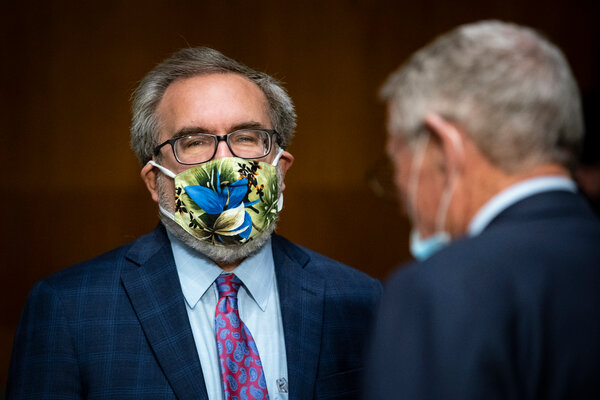 Mr. Wheeler formally proposed the rule change in June, following years of complaints by fossil fuel companies, which say the economic formulas used by the federal government to justify pollution controls have unfairly harmed them. During the Obama administration, the E.P.A. drafted a rule to limit toxic mercury pollution from power plants, estimating that it would cost the electric utility industry $9.6 billion a year. But an initial analysis found that reducing mercury would save just $6 million annually in health costs.

To justify that stark imbalance, the Obama administration found an additional $80 billion in health “co-benefits” from the incidental reduction of soot and nitrogen oxide that would occur as side effects of controlling mercury.

In May, the Trump administration completed a rollback of that Obama mercury rule that discounted such co-benefits.

The new rule would extend that measure by eliminating or reducing the emphasis on co-benefits across all new Clean Air Act regulations.

In his June announcement of the proposed rule, Mr. Wheeler said that the E.P.A. would still calculate the economic value of such co-benefits. But he said those calculations would no longer be used in defending rules. “Co-benefits would not be used to justify the rule,” he said at the time, noting specifically that the change would mean that regulations like the Obama-era mercury rule would no longer be defensible.

“The way the Obama administration used co-benefits to calculate the mercury rule and other rules — they were playing a shell game,” he said.

Historically, the economic costs of regulating pollutants such as mercury or planet-warming greenhouse gases often do outweigh the direct benefits. But such rules also tend to lower emissions of another deadly pollutant: fine industrial soot, also known as particulate matter.

By reducing emissions of the tiny, lung damaging particles known as PM 2.5, clean air rules that are primarily aimed at controlling different pollutants can have the effect of saving thousands of lives by lowering rates of asthma and lung disease. And, in April, researchers at Harvard released the first nationwide study linking long-term exposure to PM 2.5 and Covid-19 death rates.

Policy experts said that the new Trump rule, if in place for four years, could help the agency defend the rollback of Obama-era rules on climate-warming greenhouse pollution, by discounting the public health benefit of PM 2.5 that would also come with such rules.

As it stands now, however, the Biden administration is set to reinstate those climate rules — although the legal process to do so could take more than a year. Experts said that it would quite likely take about six months to roll back the new cost-benefit rule, so it would no longer be in place by the time the Biden administration reinstated the Obama-era rules on mercury and climate-warming greenhouse gases.

“It’s like breaking all the calculators on the way out the door,” said Jack Lienke, the director of regulatory policy at the New York University School of Law’s Institute for Policy Integrity. “The people coming in can buy new calculators. It’s just a hurdle and takes some time. It’s just another annoyance for the incoming administration to deal with. ”