Met Office weather warnings have emerged across the country this morning, as the agency placed alerts due to heavy incoming rain. They advise an incoming band of rain could endanger people in the southwest and northeast, with inches of surface water. As such, flooding risks remain high, and forecasters have also issued a “danger to life” warning.

The latest forecast states up to 120mm (4.7 inches) of rain could fall over two amber warning areas.

Updated warnings include the southwest Midlands and southern England, and parts of Fife and Moray in Scotland.

The first warning reads: “A band of rain will become slow moving and heavy across Wales, the West Midlands and into western parts of southern England.

“This is likely to bring flooding and some disruption to travel.” 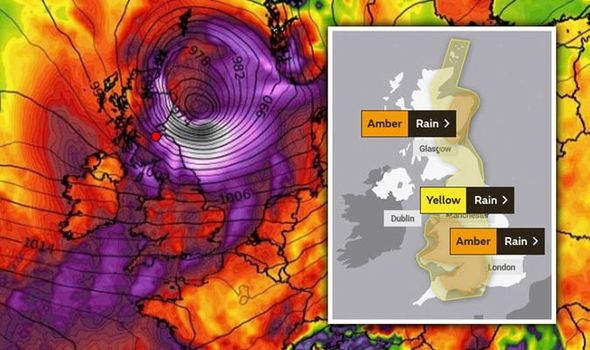 “Many places will see 25 to 50 mm of rainfall, with totals of 70 to 90 mm expected over higher ground of Wales and southwest England as well as the potential for over 120 mm in some of the most exposed high ground of Snowdonia and Exmoor.

“The unusual wind direction associated with the rainfall will mean that the peak rainfall totals are likely to occur in some areas that are usually well sheltered and drier during unsettled spells of weather.”

Potential effects from the southwestern warnings include flooding in homes and businesses, both deep and fast flowing at times.

Spray and flooding may also cause delays to transport and cut off some communities the Met Office added.

Conditions in the southwest will persist from 12pm today until 6am tomorrow, creating hours for the band of rain to inuindate communities below.

The second warning for Scotland warns of much the same, but with the worst rain confined to higher ground.

The Met Office said: “An area of rain is expected to move into Scotland from the east on Saturday morning and persist though to Sunday before clearing westwards.

“This will bring widely 40 to 70 mm of rain to this area with over 120 mm likely over the high ground and to flooding and travel disruption – particularly across parts of Aberdeenshire and Angus.”

How the virus cleared the world’s most polluted skies